“Whenever you feel an impulse to perpetrate a piece of exceptionally fine writing, obey it—whole-heartedly—and delete it before sending your manuscript to press. Murder your darlings.”

Murder your darlings. The British writer Sir Arthur Quiller Crouch shared this piece of writerly wisdom when he gave his inaugural lecture series at Cambridge, asking writers to consider deleting words, phrases or even paragraphs that are especially dear to them. The minute writers fall in love with what they write, they are bound to lose their objectivity and may not be able to judge how their choice of words will be perceived by the reader. But writers aren't the only ones who can fall prey to the Pygmalion syndrome. Scientists often find themselves in a similar situation when they develop “pet” or “darling” hypotheses. 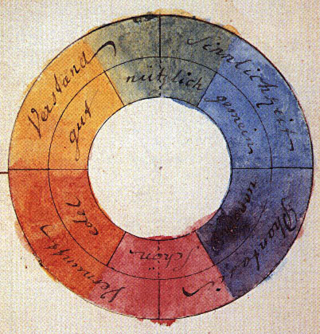 Goethe's symmetric colour wheel with associated symbolic qualities (1809) via Wikipedia, based on Goethe's theory of color which has not been proven scientifically

In addition to experimental data, a number of additional factors can also play a major role in determining whether scientists will either discard or uphold their darling scientific hypotheses. Some scientific careers are built on specific scientific hypotheses which set apart certain scientists from competing rival groups. Research grants, which are essential to the survival of a scientific laboratory by providing salary funds for the senior researchers as well as the junior trainees and research staff, are written in a hypothesis-focused manner, outlining experiments that will lead to the acceptance or rejection of selected scientific hypotheses. Well written research grants always consider the possibility that the core hypothesis may be rejected based on the future experimental data. But if the hypothesis has to be rejected then the scientist has to explain the discrepancies between the preferred hypothesis that is now falling in disrepute and all the preliminary data that had led her to formulate the initial hypothesis. Such discrepancies could endanger the renewal of the grant funding and the future of the laboratory. Last but not least, it is very difficult to publish a scholarly paper describing a rejected scientific hypothesis without providing an in-depth mechanistic explanation for why the hypothesis was wrong and proposing alternate hypotheses.

For example, it is quite reasonable for a cell biologist to formulate the hypothesis that protein A improves the survival of neurons by activating pathway X based on prior scientific studies which have shown that protein A is an activator of pathway X in neurons and other studies which prove that pathway X improves cell survival in skin cells. If the data supports the hypothesis, publishing this result is fairly straightforward because it conforms to the general expectations. However, if the data does not support this hypothesis then the scientist has to explain why. Is it because protein A did not activate pathway X in her experiments? Is it because in pathway X functions differently in neurons than in skin cells? Is it because neurons and skin cells have a different threshold for survival? Experimental results that do not conform to the predictions have the potential to uncover exciting new scientific mechanisms but chasing down these alternate explanations requires a lot of time and resources which are becoming increasingly scarce. Therefore, it shouldn't come as a surprise that some scientists may consciously or subconsciously ignore selected pieces of experimental data which contradict their darling hypotheses.

Let us move from these hypothetical situations to the real world of laboratories. There is surprisingly little data on how and when scientists reject hypotheses, but John Fugelsang and Kevin Dunbar at Dartmouth conducted a rather unique study “Theory and data interactions of the scientific mind: Evidence from the molecular and the cognitive laboratory” in 2004 in which they researched researchers. They sat in at scientific laboratory meetings of three renowned molecular biology laboratories at carefully recorded how scientists presented their laboratory data and how they would handle results which contradicted their predictions based on their hypotheses and models.

In their final analysis, Fugelsang and Dunbar included 417 scientific results that were presented at the meetings of which roughly half (223 out of 417) were not consistent with the predictions. Only 12% of these inconsistencies lead to change of the scientific model (and thus a revision of hypotheses). In the vast majority of the cases, the laboratories decided to follow up the studies by repeating and modifying the experimental protocols, thinking that the fault did not lie with the hypotheses but instead with the manner how the experiment was conducted. In the follow up experiments, 84 of the inconsistent findings could be replicated and this in turn resulted in a gradual modification of the underlying models and hypotheses in the majority of the cases. However, even when the inconsistent results were replicated, only 61% of the models were revised which means that 39% of the cases did not lead to any significant changes.

The study did not provide much information on the long-term fate of the hypotheses and models and we obviously cannot generalize the results of three molecular biology laboratory meetings at one university to the whole scientific enterprise. Also, Fugelsang and Dunbar's study did not have a large enough sample size to clearly identify the reasons why some scientists were willing to revise their models and others weren't. Was it because of varying complexity of experiments and models? Was it because of the approach of the individuals who conducted the experiments or the laboratory heads? I wish there were more studies like this because it would help us understand the scientific process better and maybe improve the quality of scientific research if we learned how different scientists handle inconsistent results.

In my own experience, I have also struggled with results which defied my scientific hypotheses. In 2002, we found that stem cells in human fat tissue could help grow new blood vessels. Yes, you could obtain fat from a liposuction performed by a plastic surgeon and inject these fat-derived stem cells into animal models of low blood flow in the legs. Within a week or two, the injected cells helped restore the blood flow to near normal levels! The simplest hypothesis was that the stem cells converted into endothelial cells, the cell type which forms the lining of blood vessels. However, after several months of experiments, I found no consistent evidence of fat-derived stem cells transforming into endothelial cells. We ended up publishing a paper which proposed an alternative explanation that the stem cells were releasing growth factors that helped grow blood vessels. But this explanation was not as satisfying as I had hoped. It did not account for the fact that the stem cells had aligned themselves alongside blood vessel structures and behaved like blood vessel cells.

Even though I “murdered” my darling hypothesis of fat –derived stem cells converting into blood vessel endothelial cells at the time, I did not “bury” the hypothesis. It kept ruminating in the back of my mind until roughly one decade later when we were again studying how stem cells were improving blood vessel growth. The difference was that this time, I had access to a live-imaging confocal laser microscope which allowed us to take images of cells labeled with red and green fluorescent dyes over long periods of time. Below, you can see a video of human bone marrow mesenchymal stem cells (labeled green) and human endothelial cells (labeled red) observed with the microscope overnight. The short movie compresses images obtained throughout the night and shows that the stem cells indeed do not convert into endothelial cells. Instead, they form a scaffold and guide the endothelial cells (red) by allowing them to move alongside the green scaffold and thus construct their network. This work was published in 2013 in the Journal of Molecular and Cellular Cardiology, roughly a decade after I had been forced to give up on the initial hypothesis. Back in 2002, I had assumed that the stem cells were turning into blood vessel endothelial cells because they aligned themselves in blood vessel like structures. I had never considered the possibility that they were scaffold for the endothelial cells.

This and other similar experiences have lead me to reformulate the “murder your darlings” commandment to “murder your darling hypotheses but do not bury them”. Instead of repeatedly trying to defend scientific hypotheses that cannot be supported by emerging experimental data, it is better to give up on them. But this does not mean that we should forget and bury those initial hypotheses. With newer technologies, resources or collaborations, we may find ways to explain inconsistent results years later that were not previously available to us. This is why I regularly peruse my cemetery of dead hypotheses on my hard drive to see if there are ways of perhaps resurrecting them, not in their original form but in a modification that I am now able to test.