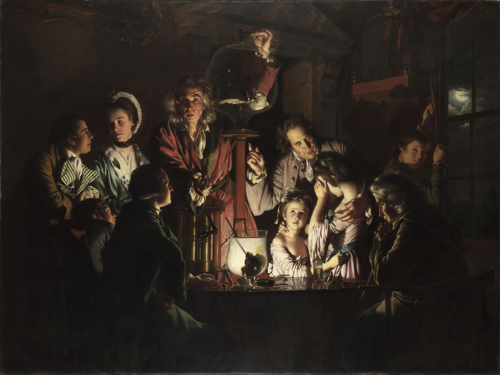 An experiment on a bird in an air pump (Joseph Wright, 1768)

Sometime in the late 1650s, Robert Boyle built an apparatus that removed the air from within a glass dome. The members of the newly-formed Royal Society promptly set about devising all manner of experiments to perform with the newfangled device. They placed candles, mercury barometers, and then – just as one might expect of unsupervised boys – living mice within the dome and watched what happened as a piston systematically drained the air away. (It is probably a good thing for the local fauna that the experimenters did not have a bigger air pump at their disposal.)

The effects of these experiments were easily seen, but controversies raged nonetheless over what was really going on. Did the device truly empty everything from the dome? Thomas Hobbes, Henry More, and others insisted that a pure vacuum is impossible, and that some sort of rarified matter must remain in the dome. Their reasons for asserting this so confidently are various. Some found the suggestion of a specific volume attached to no material thing unintelligible. Others found it ridiculous to believe that as Boyle expelled the air out of the dome, and nothing took its place, the volume of the universe would necessarily inflate by just that amount.

In his “Physical Dialogue on the Nature of Air,” Thomas Hobbes offered his own view of what the air pump was doing. Hobbes and Boyle both denied that there is any real qualitative difference between fluids and piles of particles: the differences in their behaviors were the result of the sizes and shapes of their constituent particles. Fluids consist of slippery, eel-like particles that easily slide past one another in a liquid way, and piles consist of blockier particles whose shapes prevent such easy motion. From this fact, Hobbes went on to explain that when the piston of a so-called “vacuum” pump withdraws from the chamber, the piston pushes upon the sea of particles outside the chamber, with the result that very, very tiny eel-like particles forcibly squirm their way back into the chamber (for they are the only ones that can slither through the very, very tiny pores of the chamber's glass walls). The pond of particles inside the chamber is thus made increasingly pure and light – and this is what these fellows meant by the aether. This aether is a real, material thing, they said, but is not sufficiently rich to sustain the life of a flame or a mouse. Furthermore, Hobbes's theory explained why a very great force would be required to withdraw the piston, since there ends up being a particle traffic jam around the chamber's tiny pores.

We can extend Hobbes's theory to also explain other familiar phenomena: when a straw containing liquid is lifted out of a liquid with the uppermost opening tightly covered, for example, the liquid in the straw will remain suspended in the straw, because there is insufficient force being pressed on the particles outside the straw to force the tiny ones to enter through the straw's tiny pores. So the liquid does not fall because there is nothing pushing it out – and besides, it has nowhere to go, as all the area outside the straw is jam-packed with matter.

Boyle, however, resisted the force of these arguments. He believed that after the pump has done its work, nothing is left in the dome, as none of his careful experiment provided reason to think anything is left over. He detected no subtle “aether wind” within the dome nor any other thin, leftover fine substance. So he claimed his experiments showed that empty spaces can be introduced in nature, at least with a clever enough device.

It would seem that Hobbes and Boyle were engaged in a narrow, scientific debate over how to interpret experimental results. But in their magisterial work on this debate, Steven Shapin and Simon Schaffer argue that more than science was at stake. Boyle, for his part, was worried that Hobbes's radical materialism would lead men to atheism. Hobbes in turn simply did not like the idea of positing nothings (i.e., vacua) that were somethings (i.e., entities with size and shape). For once we open the door to invisible entities, he worried, we will generate a species of men who, like clerics, will suppose themselves to have unassailable knowledge of these invisible things. Better, he thought, to keep everything material, and confine those who believe in occult, immaterial entities to Bedlam.

The next decade saw volleys of philosophical arguments over the worth of experimental science and over the possibility of a vacuum. Many of the arguments were well-conceived, detailed, and difficult to rebut at the time. But in the larger scheme they were all beside the point. Boyle's account of matter and vacua, like Copernicus's model of the solar system, finally secured a genuine advance in science despite the cogency of any philosophical objection to the contrary, leading one to wonder whether revolutionary science has not as much to do with critical thinking and logical inquiry as it has to do with a less rational or even unruly seizure of insight. The experimenter sees, as in a kind of vision, the way things very well may be; and then proceeds to wave aside every good reason for thinking things cannot possibly be that way, and doggedly follows the hunch until the objections are silenced by the evident success of the new vision.

Shapin & Schaffer argue that any intellectual or scientific community exists within the larger forces of a society, and despite every attempt by the community to remain objective, social forces end up there anyway. This would have been bad news for those who initially formed the Royal Society, since they were hoping their society could exist in a sort of political vacuum. As Thomas Sprat wrote in the first history of the Society, “Their first purpose was no more, then onely the satisfaction of breathing a freer air, and of conversing in quiet one with another, without being ingag’d in the passions, and madness of that dismal Age.” But this kind of political vacuum is indeed impossible: everything that happened in the Gresham College chamber both pressed upon and was pressed upon by the environment beyond that chamber. The last line of Shapin & Schaffer's book – “Hobbes was right” – means that, whatever the case is with the air pump, there never is a vacuum in the politics of human lives – scientists included.

Edward Grant (ed.). Much Ado About Nothing. Cambridge University Press, 1981.