“…..all the charming and beautiful things, from the Song of Songs, to bouillabaisse, and from the nine Beethoven symphonies to the Martini cocktail, have been given to humanity by men who, when the hour came, turned from tap water to something with color in it, and more in it than mere oxygen and hydrogen.”

—
H.L. Mencken
Delighted to be traveling back to Marseilles, I decided to try and make Bouillabaisse a few days before we left.
A dish that started out as a simple fishermen’s leftover stew is, in fact, quite challenging to make—but somehow also strangely fun! But maybe I just like the word! Bouillabaisse!
A few years ago, I participated in an academic conference on the topic of cities, which was held in Shanghai. Following the methodology used in the organizers' wonderful book, all the participants were to present a paper on a city in terms of a specific trope. So, Daniel wrote of Oxford as the “City of Learning” and Paris as the “City of Romance” (and unpasterized cheeses)… while Avner stole the show with Jerusalem, the “City of Religion.” It was a lot of fun, and my city was Tokyo: the City of Transience (fires and flowers).
As I was reading and thinking about my paper, I came across this wonderful poem by Mahmoud Darwish–that for me, above all, captured the sprit of the project we were working on. Darwish wrote that “cities are smells:”

Anyone who has ever taken the bridge across the water to Venice, knows that cities (no matter how close in proximity they might be to each other) have their own distinct and discrete smells. Venice smells swampy and sweaty and you notice it the minute you arrive; Bali is overwhelmingly of heavenly frangipani and temple incense; Hue like fish sauce and lotus, Saigon like warm bread and coffee (and I think it smells like spies too)– each has their own beautiful colors and culture; their own spirit and fragrances. And, cityscapes –like landscapes—become the particular atmosphere to which those who live in these particular places become attuned.

It is this spirit which enables people to say that great cities are all more than just the sum total of their parts.Think, for example, about how the citizens of Carthage at the end of the Third Punic war begged the Romans to spare their city:

Spare the city which has done you no harm, but, if you please, kill us, whom you have ordered to move away. In this way you will seem to vent your wrath upon men, not upon temples, gods, tombs and an innocent city (Appian’s Roman History) 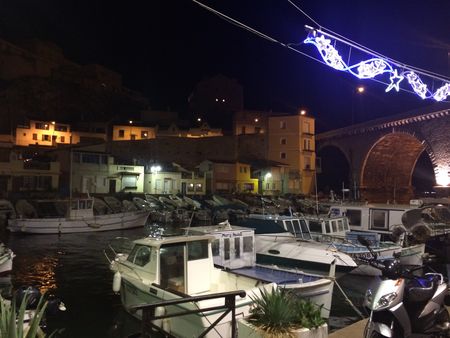 Of all the cities of the world, Marseilles is special to me. I have only fallen in love at first sight with two cities: Hong Kong and Marseilles. I would argue the two places have much in common– from the beautiful misty light of the sea and the unique types of seafood found there to the dynamic pragmatism and energy of the people, they are both amazing places to eat. Food is so central to understanding both of these cities and in the case of Marseilles, at least, I think it is the number one way people seem to like talking about the place….

Maybe it is the Crusader connection–or maybe it was simply the fish and the sea, but France's oldest city reminds me much more of Acre than it did of Paris…. Excitingly diverse in both people and seafood, they are both places to eat fabulous things, like grilled John Dory, eel, fabulous tajines and rouille or hummus, and wonderful cookies shaped like tiny boats, which according to Provencal legend are made in the shape of the sail-less and oar-less boat that carried Lazarus, Mary Magdalen and Martha from Jerusalem to the French village of Saintes-Maries-de-la-Mer in 40AD.

I have to recommend a wonderful cookbook by Daniel Young–not just because of the recipes, but because I think it is the best introduction to the city I have read. Made in Marseilles.

In Marseilles, I somehow stumbled on the same neighborhood that he had so lovingly describe in his book. Located just south of the Canebière around rue Longue-des-capucins and rue Vacon, you find yourself in the kitchen pantry of the world! From halal butchers, Tunesian cafes and olive sellers to Egyptian and Taiwanese bakeries and Vietnamese markets and African incense, everything you can imagine is on sale! It is the world's great melting pot; this “babel of all nations,”as Flaubert called it, the streets had colorful items on sale from North Africa, Armenia, Corsica, Greece, Italy, Lebanon, Indo-China and sub-Saharan Africa.

Just like when I visit Hong Kong, what I really like to do in Marseilles is is walk the streets and eat. For our much looked-forward to evening of bouillabaisse, we followed the advice of a local friend and headed over to Chez Fonfon, located in the incredibly picturesque Vallon des Auffes. I knew the Bouillabaisse would taste quite differently from mine (!!) since the fish available in Marseilles is so different from what is available in California (or anywhere else for that matter). However, it was the fish stock that really was the big difference! In fact, so important is the bouillon that in Marseilles it is typically served first alone, before the fish and vegetables are added for the second course. In Japan, I was married to someone who was extremely particular about fish stock. Being from a place in Japan known for its unique style of fish stock, it was something I made every morning as soon as I woke up–to be used for food used for the rest of the day. Very easy to make, this style was simply konbu and anchovies. Simple but delicious.

Poking arund online for bouillabaisse recipes, I was really surprised that none of the online recipes I looked at explained how to make the fish stock. So, I just sauteed the garlic and onions with spices and then added the saffron to a prepared fish stock I got at Whole Foods.

This was very expensive–but not bad. But it sure didn't taste like the soupe d'or what we had at Chez FonFon. 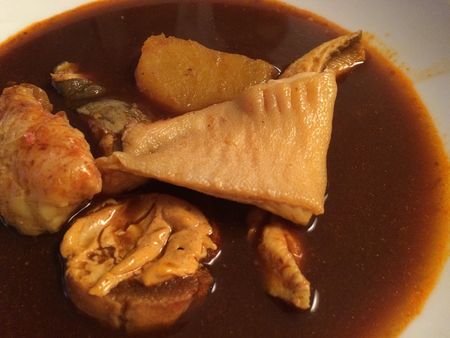 In Marseilles, our friend Bruno said the fish sellers have the fish heads and other parts ready to be purchased in bags for making the stock. I think that would make all the difference since the broth at Chez Fonfon was incredibly perfumery and savory. Absolutely perfect in fact. David Young's recipe is fairly complicated involving passing the sauteed rock fish or fish heads through a food mill–like this at 3:23.

Maybe the real problem (beyond cooking skills) is getting the right fish for the soup, though. I used this “easy bouillabaisse” recipe and was really happy with both the combination of fish and the rouille. Young says that be to be authentic, one really needs at least four of the following: rascasse (scorpion fish), chapon (similar to rascasse), galinette (a gurnard), Saint Pierre (John Dory), monk fish and fielas (conger eel). I used, mussels, shrimp, salmon, cod and scallops. A picture is worth a thousand words. While I loved the fish choices and rouille in my recipe (top picture), Chez Fonfon's broth (picture just above) was to die for. PLus it was the real thing!

What a city. What a dinner~~Bon apetit!

Highly recommnded: Made in Marseille by Daniel Young (hands down one of the best cookbooks I have ever bought).

Chez FonFon in Marseilles and Buri Buri in Acre