Long years ago, when I waddled around in pigtails, I said aloud the magic words that for many years characterized how I felt about the world, my world. “I will settle in America”, I said. Neither did I know how heavy “settling” can be nor was I clued into the power of words. Carelessly, toddler-ly, I threw around that which would one day make my world.We didn't say politically correct things then. As far as we all knew, all of the Americas was North America, and all of North America was the US. My father had just returned from travels to the US, and he had brought back suitcases spilling over with things guaranteed to charm curmudgeonly three year olds.

America was then not only an idea but an escape. I was charmed into thinking that going to America indicated not only the newness of a world, but a not-ness of the one I inhabited. No school, no dreary days, no strange scapes of a scary adult world with its inexplicable sorrows and forbidding rules. America was fabulous, with its flowery denims, and video games, and automatic erasers. I was mesmerized by View-Masters, with their otherworldly scuffed gaze onto so-near foreign shores.

These were the eighties. India was a sovereign, socialist, secular, democratic republic with one, and later two, television channels. We all read the national pledge aloud in school, that went something to the effect of “India is my country and all Indians are my brothers and sisters”. We all suffered one heckler in every class who would mutter sotto voce “Well who do I marry then?” We received our news from singular sources and imagined our leaders sovereign, if ineffectual. We trusted secularism, even if in its often troubled avatar, tolerance. We muddled through power cuts, and ration cards, and held onto a quiet, steely middle-classness. Benedict Anderson would have pronounced us a truly well-imagined nation; or at least, some of us.

In this world, America's otherness beckoned ever so strongly with its free love (read sex), and rampant spending; with its alter-egoness of individualism and seeming control over the world. But India allied with the USSR. The mythical Russia communicated to us only held Mathematics books, fairy tales, and War and Peace in stock. I hated math, much preferred the Brothers Grimm, and to date, am at odds with the melancholies of Tolstoy.

For many years, I held onto this fantasy world of America. This changed in the nineties, whence I discovered rebellion and economic liberalization in the same breath, and within the homeland. In such times, leaving for America was “uncool”; just as lacking in spunk as those unknowing, unthinking engineering graduates who left in hordes contributing to what the dailies derisively titled “brain drain”. In contrast, I wanted to stay and ride the new wave of opening markets, and a rising MBA count. So I thwarted well-meaning suggestions that I study literature and enrolled in a commerce and economics degree before heading stubbornly towards a Masters in marketing communications. It was a heady time to be an eighteen year old. The milieu seemed to suggest that the world was merely a few years away. I became a newly minted management graduate, found a job, and pretended to the trappings of adulthood. I wondered aloud as to why anyone, and more specifically why I would want to get to America, because really, what did America have that I didn't?

But then the finality of it all hit as life became all about days at work. I was bored.

So many years after making that loud and bold and unthinking pronouncement, I left for the United States of America; for contrary gains. Not money, and not conspicuous consumption, but instead in pursuit of the most hallowed of all hallowed middle-class goals —a doctoral degree. My past had caught up with me. I boarded the plane in Bombay with my boss's words ringing in my ears, “Why are you leaving? You are a doer not a thinker”. I couldn't tell him that this was precisely why I was leaving, because I was tired of doing without thinking. 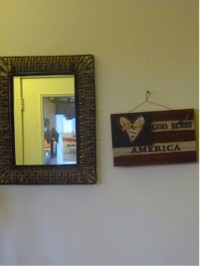 I moved to Texas, anthropology, and graduate school. It took me a year or two to stop staring wide-eyed at everything the massive and uncontrolled landscape had to offer —gigantic highways with feeder roads the size of a ranch, supermarkets the size of my hometown, smelly hippies, Mexican martinis, Foucault, Americans—and the differently American Americans. Through my twenties and through the turn of the century, I attempted to live on two continents. I gained a couple of degrees, and a lot of what I thought to be familiarity. I traveled, I cooked, I moved houses, and learnt how to drive and dance. I pronounced confidently that I would ultimately live in India and mistakenly thought that I had consumed as much of America as I could.

I graduated, and moved to Madison, Wisconsin. For the second time in many years, I found that I hadn't seen it all. I lived in a wonderful house with wonderful women who taught me about new forms of kinship. I swam in the lake, biked to school, and learned how to teach. Two years of Midwestern living showed me a whole new side of America; even if some of them in this part of the country called me “the dark one”. Two more years down, I thought that I had finally seen America.

However, right before I moved back to India, I went on a roadtrip to the dunes by the shores of Lake Michigan. We passed towns called Hart (where every roadsign bears a heart next to the name of the road), Pentwater (also called the graveyard of ships), Ludington (where the tour guide at the lighthouse regaled us with his logics of why teachers should not be paid more than they already are), and Saugatuck (built over the former ghost town of Singapore, Michigan). We retired to an inn where the otherwise friendly owners didn't in the words of Destiny's Child “say my name” at all, three days straight. Now I do admit that my name is an enterprise fraught with danger for even the most linguistically malleable of cultures, but surely one must try? For the first time in a very long time, I felt profoundly alienated.

It is perhaps fitting that many years after coming to the US, I left knowing that I did not know America. To this day, the thought is as liberating as it is unnerving. It is a realization of self and world in the same breath. Just because one is grown up does not mean one needs to stop thinking. One must break and build, break and build, again and again. One must keen, weep, and hold on tight before letting go. And then open up the body, and the world.

America came. America went. Now it is part of a larger world that I know as little as I know America.