As a rule, I am wary of art installations. I am never sure if the form they take bear any relation to the political content they claim to espouse. Also, as a rule, I visit modern art exhibitions for their verbosity. The words speak to me of artistic intent that always races ahead, far in excess of its signifying objects. The intent itself I find to be of such beauty, nudging me with its faint hints of revolution and radical joy. Of course, it does worry me that I have to read the labels of things before I can calculate the impact they will have on my fervor and/or joy.

However, on the lowest rung of my pleasure-affording hierarchy lie modern art installations. I remember once visiting the Museum of Modern Art in New York City and staring hard at a diagonal tube light mounted up on a wall. I also metaphorically bonked myself on the head for “Artist” not making the top three on the list of possibilities suitable to my eight year old self's artistic ability or lack thereof.

As I walked into Ai Weiwei's exhibition “Evidence” I thought to myself that I should maintain a healthy cynicism and a suitably controlled set of expectations about what a set of art installations ought to be able to evoke. In the late afternoon of a confusing Berlin summer, I got off the bus already flush with the pleasure of a scarily efficient public transport system, and walked down the lane to the spot on my Google map that said “Martin-Gropius-Bau”. The Bau is a startlingly beautiful building, all neo-Renaissance in its pastiche of dome, entryway columns, curlicued windows and shadowy moldings. Something already felt right. The sun shone bright and the clouds filtered out its strongest rays. I was suitably warm and the light was suitably right. Ai Weiwei in his entire grandfatherly wallpapered aura stared straight ahead and betrayed no amusement at my sudden and unexpected enthusiasm. 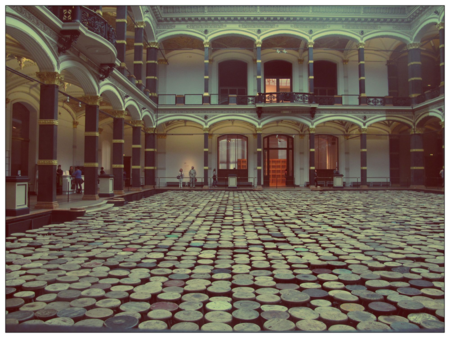 Across eighteen rooms of the Bau were spread all the works that were being curated under the title “Evidence”. Playing with the concept of both what “discovery” means to police and detective records, and the concept of empirical “evidence” as relating to crimes both contemporary and historical, the main items of this exhibit comprise found, made, and remade artifacts—touchy, feely, gritty physical objects. Most of them display familiar hints of the Ai Weiwei oeuvre. They offer confusing and paradoxical cues by playing with the material they are composed of, they are parts of a much larger story that they bear evidence to, and they are often directly related to aspects of the artist's life.

Of course, Ai Weiwei's entire artistic career is both prolific and provocative and distinguishes itself by not separating art from the world that it inhabits. Ai has always been resolutely political in his art in that it is the lens through which he engages with the Chinese state. However, this is a double-edged sword because of the nature of the state that he critiques, the state that everyone loves to do business with, even as it is the state that everyone loves to hate. In this sense, the Chinese state is for all practical purposes a soft target. This state is Ai's primary interlocutor. And the Chinese state responds as if on cue, time after time. It imprisons him, it persecutes him, it destroys his studio, and it doesn't allow him to leave the country. It becomes the enemy against which all his wars are waged.

In response, he gets louder and bigger. “Evidence”, which is his largest one-man exhibition yet has been designed from his studio in China from where he has orchestrated its execution. Even as he is sequestered within the political borders of China, others build his exhibition for him and voice his agenda. A beautiful book is produced detailing his life and struggle. There are posters and postcards in the museum shop sending out their political message into the world.

I am lulled by his world. I look at his work and want to shake my fist at the man—the Chinese man, a man, any “the man”. I nod in violent agreement. The state is absurd, the government persecutes, and censorship and control are all about an underhanded social engineering plot. Following up on my mental calisthenics, I garner that the state does not care about its citizens, history is invented, territorial and border control are violent continuities of the imperial project, free expression scares the state, and law is merely a device to screen off the unwanted and dissident elements of society. I recognize these elements and am gratified that I have not been singularly persecuted in this world. My world and Ai's, they are both the same and they are both Kafkaesque.

All too soon, I find myself discarding this content. I proceed to the “So what” question. These are after all the problems of a soft target. A restaging of its atrocities does not beget any different a reaction. As perhaps a facetious submission to the theory of diminishing marginal utility will tell us, repeated viewings of phenomena albeit in different form do not in themselves inspire exponentially or even geometrically incremental emotion. One is tempted to repeat after the much-tweeted figure of a woman protesting the shooting of Mike Brown in Ferguson, Missouri, “I cannot believe I still have to protest this shit.”

I walked around some and slowly realized that I did not want to leave. I continued to find myself engaged with these objects qua objects. 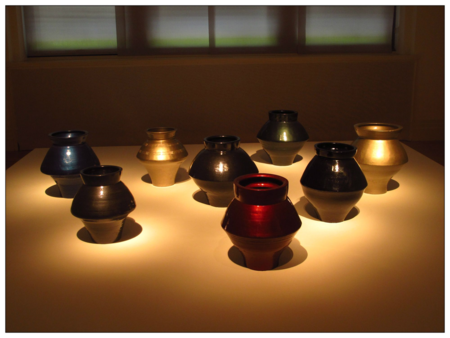 Perusing museums has always been to me a solitary exercise of much pleasure. One of my few guilty pleasures in the so-called-West has always been the museum visit. I will confess that while part of my pleasure is in the vision of myself as a cosmopolitan museumgoer, the kind that ought to inhabit novels about worldly-wise New Yorkers and impoverished-but-inherently-cultured characters that can espouse art history facts at the drop of a plot, a lot of my interest comes from the pleasure of the object and its textures. Things in their touchy-feeliness evoke in me the kind of sensual emotion that I ideally ought to reserve for human subjects, but ah well. Jackson Pollock's smudgy, seductive dabs of paints, Man Ray's visceral rayographs, and even Dali's melting clocks allow me to inhabit this not-this world with all the material pleasure of the real world. My Marxism is all aesthetic. Would one call Ai Weiwei a Marxist? In the city that loves its public installations, children slide in and out of Picasso's jungle-gym-like sculpture and make faces at Anish Kapoor's Bean. In the Bau, I wanted to be those children. One wants to touch the objects that Ai produces. In their skewed scales (a large island, like a rich man's toy, but so much smaller than the real island) and their surprising textures, they evoke so much play. One wants to live in the prison cell he reconstructs for this exhibition. It looks tiny, but safe. In its dislocated location, it feels not so much a prison as a way of life secluded from the vagaries and dangers of the state. One wants to play hopscotch on the marble island. Disputed as it may be, it also looks wonderfully untouched in all its cold perfection, and one is free therefore to imagine a paradise far from the clutches of modernity. I wanted to go sit in the Ming vases painted over in bright metallic colors. I wanted to make faces at the twelve figures of the Chinese horoscopic pantheon. The rubbed and sanded chairs that he effaces of their ancientness looked like they might grow wings any moment. The turned and twisted rebars of Ai's remembrance of the schools pulverized in the Sichuan earthquake of 2008 would make great swings and seesaws I thought. I wanted to wear Ai's doubled shoe and mount his jade gas mask on my head. I craved bodily enactment of these tragically fantastical objects. Outside of the context of the great tragedies of the Chinese state, these engineered objects seemed much like a few artifacts robbed of aura and invested instead with the possibility of a new world. Defanged and re-enchanted, they begged the question of political art.

Slavoj Zizek's brilliant book “The Sublime Object of Ideology begins with a chapter titled “How did Marx invent the symptom”, wherein he argues compellingly for the form that things take to be important objects of analysis and therefore, watch the thing in itself, he says. His reading of Freud is that one needs to ask the question, “Why did the dream take the form that it did?” rather than relegating the objects of the dream to be mere carriers of the meaning that one is eager to uncover. In other words, what you see is what you get. And what you see is not arbitrary.

The objects in Ai Weiwei's “Evidence” are big, and sprawling, and beautiful. You can touch, feel, and crawl in and out. You can stretch your eyes across the length and breadth of the room and imagine this to be the giant playground that Ai has made for you. You can pretend to inhabit these tragedies without fearing its dangers. In other words, through objects thin and tall, large and small, Ai re-acquaints one with the schizophrenic life of modernity—its uncanny objects, and its dangers, all incumbent upon a game wherein now you see and now you don't. In the uncovering of arbitrary artifacts, some represented, others recreated, and still others restaged, restaged, I argue are the possibilities of a political life. In the recognition that our lives are predicated on sometimes seeing, sometimes not seeing, and always perfecting the art of not feeling, lies the possibility of politics.