“Do not put your work off till tomorrow and the day after; for a sluggish worker does not fill his barn, nor one who puts off his work: industry makes work go well, but a man who puts off work is always at hand-grips with ruin.” Hesiod in “The Works and Days“ 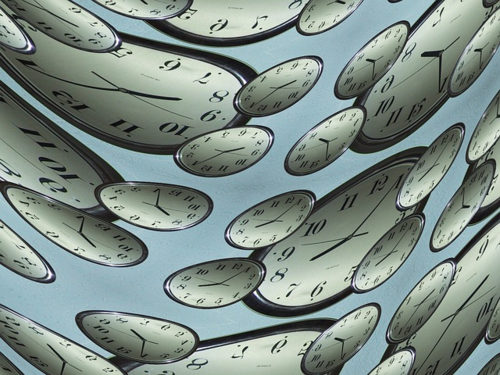 Paying bills, filling out forms, completing class assignments or submitting grant proposals – we all have the tendency to procrastinate. We may engage in trivial activities such as watching TV shows, playing video games or chatting for an hour and risk missing important deadlines by putting off tasks that are essential for our financial and professional security. Not all humans are equally prone to procrastination, and a recent study suggests that this may in part be due to the fact thatthe tendency to procrastinate has a genetic underpinning. Yet even an individual with a given genetic make-up can exhibit a significant variability in the extent of procrastination. A person may sometimes delay initiating and completing tasks, whereas at other times that same person will immediately tackle the same type of tasks even under the same constraints of time and resources.

A fully rational approach to task completion would involve creating a priority list of tasks based on a composite score of task importance and the remaining time until the deadline. The most important task with the most proximate deadline would have to be tackled first, and the lowest priority task with the furthest deadline last. This sounds great in theory, but it is quite difficult to implement. A substantial amount of research has been conducted to understand how our moods, distractability and impulsivity can undermine the best laid plans for timely task initiation and completion. The recent research article “The Categorization of Time and Its Impact on Task Initiation” by the researchers Yanping Tu (University of Chicago) and Dilip Soman (University of Toronto) investigates a rather different and novel angle in the psychology of procrastination: our perception of the future.

Tu and Soman hypothesized that one reason for why we procrastinate is that we do not envision time as a linear, continuous entity but instead categorize future deadlines into two categories, the imminent future and the distant future. A spatial analogy to this hypothesized construct is how we categorize distances. A city located at a 400 kilometer distance may be considered as being spatially closer to us if it is located within the same state than another city which may be physically closer (e.g. only 300 kilometers away) but located in a different state. The categories “in my state” and “outside of my state” therefore interfere with the perception of the actual physical distance.

In an experiment to test their time category hypothesis, the researchers investigated the initiation of tasks by farmers in a rural community in India as part of a larger project aimed at helping farmers develop financial literacy and skills. The participants (n=295 male farmers) attended a financial literacy lecture. The farmers learned that they would receive a special financial incentive if they opened a bank account, completed the required paperwork and accumulated at least 5,000 rupees in the account within the next 6 months. The farmers were also told they could open an account with zero deposit and complete the paperwork immediately while a bank representative was present at the end of the lecture. Alternatively, they could open the bank account at any point in time later by going to the closest branch of the bank. These lectures were held in June 2010 as well as in July 2010. In both cases, the six-month deadline was explicitly stated as being in December 2010 (for the June lectures) and in January 2011 (for the July lectures). The researchers surmised that even though the farmers were given the same six-month period to open the account and save the money, the December 2010 deadline would be perceived as the imminent future or an extension of the present because it fell in the same calendar year (2010) as the lecture, whereas the January 2011 deadline would be perceived as a far-off date in the distant future because it would fall in the next calendar year.

To test whether their idea of time categorization into the “like-the-present” future and the distant future could be generalized, the researchers conducted additional studies with students at the University of Toronto and the University of Chicago. These experiments yielded similar results, but also revealed that the distinction between “like-the-present” and the distant future is not only tied to the end of the calendar year but can also occur at the end of the month. Participants who were asked in April to complete a task with a deadline on April 30th indicated a far greater willingness to initiate the task than those with a deadline of May 1st, presumably because the April group thought of the deadline being an extension of the present (the month of April).

One of the most interesting experiments in their set of studies was the investigation of whether one could tweak the temporal perception of a deadline by providing visual cues which link the future date to the present. Tu and Soman conducted the study on March 9, 2011 (a Wednesday) and told participants that the study was about judging actions. The text provided to the participants read,

The researchers then showed the participants a calendar of March 2011 and told them that all the given actions would occur on March 13, 2011 (a Sunday). But the participants were divided into two groups, half of whom received a calendar in which the whole week was highlighted in one color, thus emphasizing that the Sunday deadline belonged to the same week (“like-the-present group”). The control group received a standard calendar in which the week-ends were colored differently from working days. The participants were provided with a list of 25 tasks and given two options for how they would describe each task. The two options reflected either a hands-on implementation approach versus more abstract approach. For example, for the task of “Caring for houseplants”, they could choose between the hands-on option “Watering plants” or the more abstract option “Making the room look nice”. Participants who saw the calendar in which the whole week (including Sunday) was depicted in the same color were significantly more likely to choose implementation options, suggesting that the visual cue was prepping their mind to think in terms of already implementing the tasks.

The work by Tu and Soman makes a strong case for the idea that we think of the future in categories and that this has a major impact on our tendency to procrastinate and take charge and expediently initiate and complete tasks. However, the work does have some limitations such as the fact that the researchers did not investigate whether the initial categorization is modified over time and whether specific reminders can help change the categorization. For example, if the farmers with the January 2011 deadline were to be approached again in the beginning of January 2011, would they then re-evaluate the “remote future” deadline and now consider it to be a “like-the-present” deadline that needs to be addressed immediately? Another limitation of the research article is that it does not explicitly state the ethical review of the studies, such as whether the farmers in India knew that their data was being used for a behavioral research study and whether provided informed consent.

This research provides fascinating insights into the science of procrastination and raises a number of important questions about how one should set deadlines. If the deadline is too far in the future, there is a much greater likelihood of thinking of it as a remote entity which may end up being ignored. If we want to ensure that tasks are initiated and completed in a timely manner, it may be important to emphasize the proximity of the deadline using visual cues (colors of calendars) or explicitly emphasizing the “like-the-present” nature such as stating “the deadline is in 30 days” instead of just mentioning a deadline date. The researchers did not study the impact of a countdown clock, but perhaps a countdown may be one way to help individuals build a cognitive bridge between the present and a looming deadline. Hopefully, government agencies, universities, corporations and other institutions which heavily rely on deadlines will pay attention to this research and re-evaluate how to convey deadlines in a manner which will reduce procrastination.

Yanping Tu and Dilip Soman (2014) “The Categorization of Time and Its Impact on Task Initiation” Journal of Consumer Research (published online on August 13, 2014 ahead of print).