Mathematicians have a soft spot in their hearts for mathematical trifles. These beguiling little puzzles are more amusing than important, and also often devilishly hard. These are the sorts of math problems professional mathematicians are embarrassed to admit they spend time thinking about (but would be the first to tell you if they solved it!). Call them mathematical guilty pleasures.

Fermat's Last Theorem is such a trifle. Those old enough to remember might recall seeing it in the news twenty or so years ago. It's the theorem which says that for any natural number n greater than three, you can't find integers a, b, and c which satisfy the equation:

But, to be honest, at the end of the day people don't seriously care that it is impossible to find a, b, and c which solve, for example:

But what fun would life be if you're always serious? Let's be unserious for a moment. Fermat's Last Theorem is tantalizing. It is easy to find a, b, and c which are solutions when the n is equal to two. For example, 3, 4, and 5 work. These solutions are called Pythagorean Triples because they exactly give the three sides to a right triangle and the equation becomes the famous Pythagorean Theorem [1]. There are infinitely many Pythagorean Triples, so shouldn't there also be infinitely many solutions when n is three, four, or five? What makes two so special?

The first person to ask the question was Fermat in 1637. He wrote a note in his copy of Diophantus's Arithmetica that:

It is impossible to separate a cube into two cubes, or a fourth power into two fourth powers, or in general, any power higher than the second, into two like powers. I have discovered a truly marvelous proof of this, which this margin is too narrow to contain.

You would have to have a heart of stone to not be tempted to try a few examples after reading that.

Fermat never wrote down his proof and in all likelihood he was mistaken. Indeed, it took 300+ years for math to develop enough high powered tools to tackle his simple little challenge. It wasn't until the mid 1990s that Andrew Wiles was able to affirmatively prove Fermat's “Theorem”. And while there was a great deal of excitement about Wiles's work, the real benefit Fermat's trifle was all the high powered tools mathematicians developed while wrestling with it. They are now invaluable in number theory, cryptography, and elsewhere [2].

Let me now tell you about another enticing mathematical morsel which is still unsolved: the Square Peg Problem (SPP). The history is a bit murky, but it is generally credited to Otto Toeplitz in 1911. The SPP is the conjecture that if you draw a curve on a sheet of paper without picking up your pencil and which begins and ends at the same place, then you can find four points on the curve which form the corners of a square. Such a square is called an inscribed square.

Let's look at some examples of curves drawn on the plane. The easiest is a circle, which, of course, has a square connecting four of its points:

How about a figure eight?

A figure eight has several inscribed squares. I've drawn one in red and one in yellow (they overlap slightly), and you can find at least one more in the left oval.

Okay, those are easy. But if I ask you to draw a curve, you're bound to give me something devilishly complicated like: 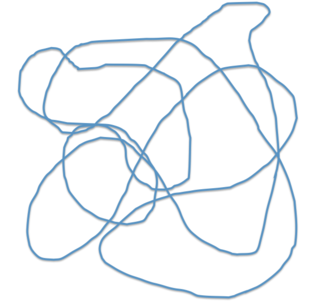 Herr Toeplitz tells us that we should still be able to find squares in this loopy mess. It's surprisingly good fun to try and find squares in such a curve. There's a million dollar smartphone game here somewhere [3]. I found four before giving up: 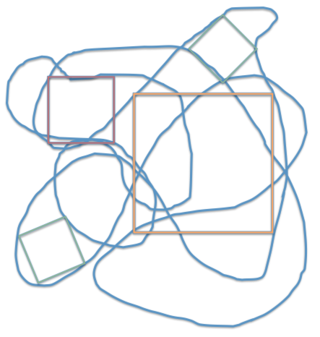 Nobody said squares couldn't be at an angle!

What is the current status of the SPP? Most people have worked on Toeplitz's original formulation where the curve had the additional requirement that it not cross itself (so the loopy one drawn above is out). These are called Jordan curves and the TPP is known to be true for any Jordan curve which is “smooth enough” (so no sharp corners) [4].

More recent work shows the TPP is true for various classes of curves which have corners and the like, but don't have too many irregularities. Or by showing the TPP is true for nearly all curves, for some precise notion of “nearly all”. Let me just mention the recent paper by Jason Cantarella, Elizabeth Denne, and John McCleary, and the work of recent PhD graduate Benjamin Matschke.

And, of course, when mathematicians can't solve the problem you ask they like to avoid admitting it by distracting you with variations. You can ask about inscribing rectangles, triangles, or other shapes. You can ask three-dimensional versions of the same question (can you always balance a tiny four-legged table somewhere on potato?). The possibilities are limitless!

Dr. Matschke wrote a very nice survey article for the American Mathematical Society's monthly Notices which reminded me that I should tell you about the TPP. He also has a delightful java app on his homepage which let's you draw curves and have the computer find its squares. You get fun pictures like this: 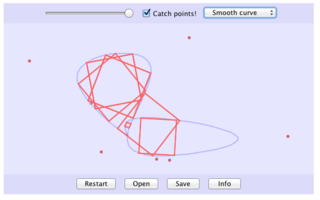 [1] By the way, in the Wizard of Oz the Scarecrow incorrectly states the Pythagorean Theorem. So much for his Doctorate in Thinkology.

[2] Chalk it up to the Unreasonable Effectiveness of Mathematics in giving answers to questions before they're asked.

[4] How does one go about proving such a thing is true for any curve? Many of the proofs involve clever things like showing that if you were to count the squares on the unknown curve, then there would be an odd number of them. And since zero is even, that means there is at least one square!