On “How Not to be Wrong” by Jordan Ellenberg.

I have to admit something. When I travel I cringe on the inside when the person sitting next to me asks what I do for a living. The arc of the conversation invariably follows one of a few paths. On the very rare occasion I am pleasantly surprised to find myself talking to someone with a genuine interest and curiosity in mathematics. Far more commonly we immediately head into “I hate math” or “I was never good at math”. Their general feeling is some mixture of fear, dislike, and bewilderment. I've learned that decades of bad experiences with math won't be overcome by our brief conversation. I must confess that I usually dive out the side door of the still moving conversation in a tuck-and-roll position and hope to tumble my way into sports, religion, Middle East politics, or some other more pleasant topic.

Math has a PR problem and it's mostly self inflicted. Most math curriculum is tedious, dull, confusing, and disconnected from everyday life. And any hope of turning things around is sabotaged by teachers and parents who themselves have unpleasant feelings about math. When asked, most people will say that math is important and useful but in ways which were never made clear despite years of math classes. They certainly won't say it's fun, thought provoking, or moving. And the “applications” they remember are those awful word problems involving circular ponds in square gardens, five workers making ten widgets every two hours, and other obviously fictional nonsense.

Fortunately there are folks making the effort to show the beautiful, exciting, engaging, and useful sides of math. One of those is Jordan Ellenberg. He is a well-regarded mathematician at the University of Wisconsin. Before turning to fulltime math, Ellenberg earned a master’s degree in fiction writing and wrote a novel (“The Grasshopper King”). Nowadays he has a blog on “Math, Madison, food, the Orioles, books, my kids”, and he writes occasional articles on math for Slate, the New York Times, and other media. As you can tell, he's the perfect guy to write a popular book about math. And he has! His book, “How Not to Be Wrong: The Power of Mathematical Thinking” has just come out and deserves to be on everyone's summer reading list. The title of this post is from Ellenberg's book and captures its spirit perfectly.

Ellenberg writes in a energetic style which conveys his enthusiasm for the topic at hand. For example, he writes about critics of Nate Silver's refreshingly honest style of giving the best available odds rather than declarative predications:

Or take Dylan Byers in Politico: “….For all the confidence Silver puts in his predictions, he often gives the impression of hedging.”

If you care at all about math, this is the kind of thing that makes you want to stab yourself in the hand with a fork. What Silver offers isn’t hedging; it’s honesty. When the weather report says there’s a 40% chance of rain, and it rains, do you lose faith in its predictions?

Ellenberg shows out where his book lies in one of his nice, low-tech drawings [2]: 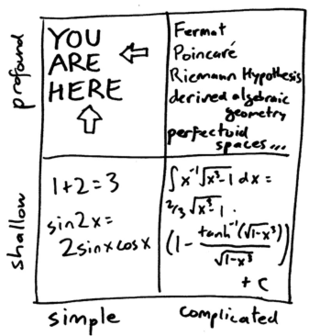 He covers a wide range of topics. Some are old chestnuts like the irrationality of the square root of two and the Buffon needle problem. But even here I often learned new things. I was delighted to learn about the Buffon noodle problem. If you drop a needle of length one on a paper with parallel lines drawn one unit apart, the probability it crosses a line is the already surprising 2/pi (what's pi got to do with it?) or around 66%. What I found new and surprising is that it doesn't really matter that the needle is straight! If you would rather drop a wet noodle on the same sheet of paper, then you'll be happy to know Ellenberg's clever argument works just as well for noodles and pins.

Other topics are not so well known: the twin primes conjecture, compression of information and error correcting codes, how to (sometimes) beat the lottery. There's something to tickle anyone's fancy. And like a good cook with spices, Ellenberg has an eye for interesting personalities, histories, and quotes to liven up the main dish.

The running theme of the book is that math is useful in everyday life. While he touches on many interesting topics, in the end Ellenberg spends much of his time in the neighborhood of probability, statistics, modeling, and the like.

Ellenberg does everyone a huge service by illuminating the many ways math can easily be used, abused, and misunderstood. And he is willing to name names! To give one example, Ellenberg calls out the Republican Party of Wisconsin for their talking point that Wisconsin was responsible for over half of the jobs created in the US in June of 2011. While it's true that the state added 9,500 jobs out of the 18,000 created nationally, they conveniently ignored the fact that neighboring Minnesota created 13,000 jobs that month. Texas, California, and several other states also beat the pants off of Wisconsin. The politicians were ignoring (no surprise!) the fact that their numbers looked so good only because of the many states who lost large numbers of jobs that month. Moral: Just because you can put a number to it doesn't make it true or meaningful.

Ellenberg does a great job talking about one issue which everyone should know by heart: the fact that threshold for “significance” in scientific studies is p=.05. That is, a research result is considered “statistically significant” if the odds that the data could have happend by chance alone is less than one in twenty. Which sounds like a reasonable test until you realize that with enough studies it's actually darn easy to hit upon one of those one-in-twenty times purely by chance! “Of all the gin joints in all the towns in all the world, she walks into mine…”

This threshold of p=.05 is nothing but historic convention. There is no reason to believe that this one-size-fits-all line in the sand applies equally well to every research question or data set. Worse, since a p of .06 makes months or years of research unpublishable, it is awfully tempting to adjust results until you get that golden p=.05. Whether these tweaks are a deliberate bending of the data or justified adjustments to eliminate extraneous noise, the worship of p=.05 distorts the scientific process.

Uri Simonsohn, an advocate for testing the replicability of research results, memorably calls this “p-hacking''. A recent example of this is the patently absurd result that hurricanes named after women kill more people than those with men's names. I haven't read the paper itself, but from the Economist's description it's impossible to take it seriously.

I do have a few minor quibbles with “How Not to Be Wrong” but I wouldn't hesitate to recommend it to anyone interested in a lively take on interesting mathematics. Like an energetic neighbor or coworker who knows interesting things about everything, the book can be exhausting at times. But its short chapters make it easy to pick up and set down again while enjoying poolside drinks this summer.