I was in my office at the Children's Defense Fund when I heard that someone had shot and killed an unknown number of children at a school in Newtown, Connecticut. I picked up the phone and called one of the top gun safety organizations in the country, and asked to speak to their policy director. When I told him who I was, and where I was calling from, he said, “Wow, I'm so sorry. What a day for you guys.” I digested the misplaced apology—there I sat, safe in my office in Washington, D.C. while mothers and fathers pulled in to the Sandy Hook Elementary School parking lot—but managed to say something like, “you, too.” Then there was a beat of silence that would have felt uncomfortable on another day, like standing too close to a stranger, but on that day it was forgiven because words prove themselves deficient on days like that, and in the face of events for which we are all to blame, apology might be the truest beginning. “So, what are you guys going to do?” I finally asked him, and we starting talking strategy.

This is how it felt in D.C.: even in the earliest moments after the earliest Newtown headlines, change seemed close enough to touch. The shooting was like a terrible wave rising in the distance, but it was a wave that might carry us to shore if we could catch it and the current stayed strong. It was opportunistic, surely, but the alternative seemed worse: to grieve and then do nothing, to let it pass, until the next mass shooting when we would grieve and do nothing again.

So I did what we do in D.C. In my role at CDF, I attended and organized meetings, rallies, and press conferences. I went to events on Capitol Hill and at the White House. We asked volunteers to call and visit their elected officials, and we supported the work of incredible grassroots groups like Moms Demand Action for Gun Sense in America. I researched numbers and drafted statements. I hugged mothers who had lost their children in previous mass shootings, like Virginia Tech and Aurora. I hugged mothers who had lost their children in the crossfire of gang violence in Chicago. This was my first time working on guns, in my first job out of law school, but it was not new subject matter for CDF, who first began collecting data on children and guns in 1979.

How do you get people to listen? Numbers help put it in perspective. If you add up the soldiers killed in action in Vietnam, Afghanistan and Iraq, you get 52,183 lives lost. During that same time (1963 to 2010), 166,500 children and teens were shot and killed by guns here at home. That's three times as many children as soldiers in war, and averages out to 3,470 children and teens killed every year. Or, 174 classrooms of 20 children a year. Or, 174 Newtown's a year.

In December, 2012, and in the weeks and months that followed, it seemed impossible that this status quo—174 classrooms each year—would persist. It was unimaginable that the NRA would double down and that instead of safety measures, more permissive gun laws would be passed (quite literally, I could not conceive of a future in which universal background checks would fail). But that's exactly what happened. Time marched on, winter turned to spring, and on April 17th, 2013, watered-down versions of the assault-weapons ban, an expansion of background checks, and an enhancement of penalties for illegal gun purchasers, all failed to get the 60 votes required to pass through the Senate. The President called it “a shameful day for Washington.” Victims and survivors of gun violence wept. The wave broke early and we were left adrift.

There are no silver bullets. Not one of these failed gun safety measures would have prevented all future gun violence individually. But collectively they might have helped prevent some future gun violence, and that possibility seems worth a try. Do not underestimate the power of signals, even if it's harder to trace cause and effect: the passage of these laws would have signaled a cultural shift, and their failure sent a message, too. A message that signaled our allegiances and priorities. A message that strengthened the NRA's chokehold on American politicians. This message was not, however, about the inviolability of Constitutional rights, because these gun safety reforms weren't threatening our Constitutional rights. When originally passed, the Second Amendment concerned “a well-regulated militia,” and the “right of the people to keep and bear arms” related to this militia. Many constitutional scholars and Supreme Court justices, therefore, understand the Amendment to grant a collective right (no longer pertinent) rather than an individual right to keep and bear arms. But even the Supreme Court Justices who do interpret it as an individual right, not one of them asserts it to be “absolute,” which the Court made clear in its recent decisions Heller and McDonald. Just like the right of free speech granted by the First Amendment, the Second Amendment is conditional, balanced against other rights and subject to regulation. Richard Martinez's son, Chris, was one of the students killed over Memorial Day Weekend by a semi-automatic handgun. “They talk about gun rights,” said Martinez on Sunday. “What about Chris' right to live?”

Asserting the Second Amendment as a bar to universal background checks and the assault weapons ban amounts to constitutional illiteracy. And I'm almost certain the NRA leadership knows it. You could say a lot of things about Wayne LaPierre, but I'm not sure he's stupid—a fact that graduates “illiteracy” to willful deceit. The NRA's misconstruction of the Second Amendment might be their greatest achievement.

A close second: the widespread proliferation of the idea, in the face of hard evidence to the contrary, that guns keep us safe. The NRA deals in fear and plays up the romance of defense from threat, while simultaneously fostering a sense of invulnerability from the kinds of headlines published every day about accidental and intentional guns deaths. In his statement last Sunday, Martinez said to all parents: “You don't think it can happen to you until it does.”

Guns don't kill people, people do. Have you noticed how many lies masquerade as “simple logic?” Of course in one sense this is true; there is usually a human hand pulling the trigger. But the gun itself introduces the potential for fatality, which this “simple logic” elides. Sometimes it's the fact of the gun, rather than the deadly intent of the hand pulling the trigger, that causes death. The toddler in Indiana who shot his father. Or how about the 19,392 gun-related suicides in 2010; maybe these people felt deadly intent—but have you read the stories of those who regret attempting suicide right after they do? (“I instantly realized that everything in my life that I'd thought was unfixable was totally fixable—except for having just jumped.”) Sometimes it is the easy availability of the gun in a desk drawer on a bad day that seals a fate. And in dramatic human encounters, like matters of the heart or money, when people are drunk or wronged or tired, the gun ensures a fatal potential where scuffle and injury might otherwise ensue.

My Uncle Roy was killed on the street in Dallas when he was nineteen. He was my mother's older brother, and his death was senseless and unplanned. Here's how it happened: another young man had found a revolver in his girlfriend's mother's nightstand, and on a whim he brought it out for the night. When a fight started up between two groups of friends, Roy got in the middle and was shot. He was shot and killed when, on another night, he might have gone home with a bruise or bloody lip. Were it not for the gun, he might still be alive.

But truth is nuanced and duality rarely precise. We have to be able to hold more than one story at a time. I have dear friends who own a ranch in the wilderness of Idaho, who rely on their shotgun to scare away bears and keep the horses safe from predators. At the same time, Richard Martinez is right to ask, “These things are going to continue until somebody does something, so where the hell is the leadership?” It's not about the elimination of all guns everywhere. It's about doing more to make sure the guns we have don't wind up in the wrong hands. Little hands that make mistakes; hands at the mercy of a brain wrought by illness. And some guns—the ones made for killing well and quickly, like semiautomatic weapons with a folding stock or a grenade launcher—these weapons don't belong in lay person's homes or hands. We are human, and our hands will always shake with passion and rage, and when the conditions are right, they will act too soon. 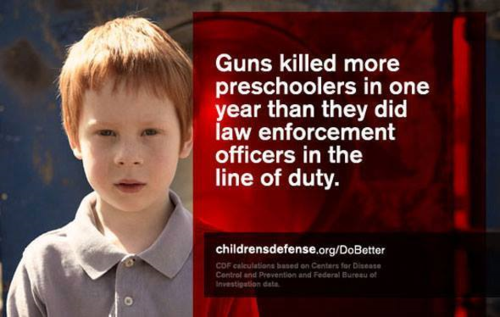 There are no silver bullets, just deadly ones. And we should do everything we can to lower the death toll in this country, where we have almost as many guns as people and where 174 classrooms of children are killed each year. Any leader or politician who's unwilling to have a conversation about saving children from gun deaths—because of the Second Amendment or fear of political fallout—is unfit to lead, intellectually and morally. And any gun-owner who's unwilling to have this conversation is unfit to own a gun.