Like cigarettes, meat and dairy packaging should include no nonsense factual warnings about the negative consequences of one’s consumption choices. Just as with cigarettes, there is a strong case that exercising one’s sovereign right to free choice on personal matters requires that people be adequately informed about the significant negative implications of their choices by someone other than the manufacturer that wants them to buy the product. In this case the significant consequences concern one’s ethical character rather than prudence (safe-guarding one’s health), but the principle is the same.

This chicken’s beak was cut off, causing it intense pain until its death

This cow’s babies were taken away and killed to keep it producing milk.

Like cigarette packaging in some countries the ethical warnings might include full colour pictures of the living conditions of the animals your food comes from. Pictures like this: 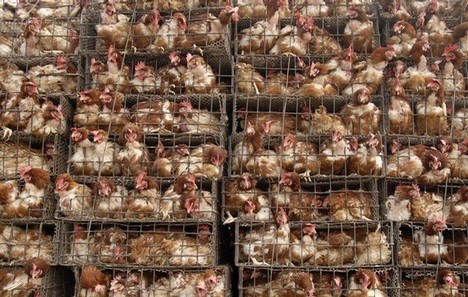 Servers of cooked animal products from lowly hot-dog stands to fancy restaurants would have to include these ethical warnings prominently on their menus.

The labels could be graded to reflect the conditions under which the source animals lived and died. That would allow better – but more expensive – standards of animal welfare to be recognised and encouraged.

It seems to me that such ethical warning labels are not only permissible in a free society; they are actually required by the liberal conception of freedom. A liberal society is defined by its respect for free choice in the private personal domain. What is not illegal is permitted. And what is made illegal should only be behaviour that harms others, rather than merely offending them by going against their private moral beliefs. In a liberal society, people are free to decide for themselves whether to do things that others strongly disapprove of, such as following ‘weird’ religions, or engaging in unorthodox sexual practices, or eating meat.

Yet the idea that free choice is trumps contains a complication. What counts as a free choice? One can’t tell just from the fact that someone chose x over y whether their choice was a free one. Let us leave aside the ‘free will’ challenge about the social conditioning that lies behind the personality that makes choices and adopt the liberal starting point that in a free society people develop their own moral character from the multiple cross-cutting perspectives and social identities they inhabit. There remains a question mark over whether the choices we make actually reflect our personal moral character. In particular, if we are not sufficiently informed about the negative and positive consequences of the options we are presented with then it does not seem that we will be able to relate those options to our own values and interests. Although we can still perform acts of choosing in such cases, we would not be choosing freely because we would not be able to exercise our right to choose in a way that follows from the personal moral beliefs that make us us.

This seems particularly problematic in consumer choice cases where two factors are present. First, where the negative consequences of consuming something seem very significant and thus have a prima facie call on the attention of the chooser. Second, where the manufacturer of a product has a strong interest in encouraging its consumption even at the expense of the customer’s own interests, and has substantial power to misrepresent the product to the consumer in a way that undermines their ability to consider its negative consequences. These factors were clearly present in the case of cigarettes, a poisonous product designed to be addictive and that was routinely advertised to children. I think they are also present in the case of animal food products.

Killing or hurting animals is increasingly alien to our modern values and sensibilities. Hence all the welfare protections for pets these days and the public outrage surrounding news items about their mistreatment. The animal products industry has adapted to this by secluding livestock and their slaughter from our gaze. When we go to a supermarket or fast-food restaurant we are presented with meat rather than with animals, and with deliciousness rather than with killing. This is an obviously one-sided presentation of the basic ethical facts about animal products that undermines our ability to choose what we eat in a way that is consistent with our moral beliefs about the treatment of animals. Ethical warning labels would allow people to make better informed ethical choices by breaking the controlled and biased information environment created by the animal products industry.

Some will argue that such labelling would be coercive – emotionally manipulative – and thus undermine free choice. But I don’t see how this argument is supposed to go through. If advertisers and restaurants can produce sophisticated ‘food porn’ that artificially inflates our lust for meat, and if manufacturers can tweak recipes to manipulate our sense of the deliciousness of animal products, surely turn about is fair play. Most people by now have some understanding of the fact that the way livestock animals are kept is rather horrible, but in the moment when we make our consumption decisions this rather abstract knowledge must go head to head with the full sensory propaganda of companies that are only interested in making us buy as much of their products as possible. Just as with cigarettes there is a strong case for presenting the negative side of the case just as forcefully as the positive case is now presented.

Yes, the consequence of mandating ethical warning labels on animal products would likely be a dramatic reduction in their consumption. But this would not be evidence of coercion. Many meat eaters justify their lifestyle by reference to their ability and right to make their own free choices. But if they are already making a free and fully informed choice that follows from an ethical value system which rates the moral status of animals simply as ‘delicious’ then it hardly seems that providing factual information about the suffering of livestock animals could affect their consumption behaviour. The ones who would be affected would be those meat eaters who already suspect that their practice is morally wrong for them – inconsistent with their own personal moral beliefs about how animals should be treated – but prefer to evade being confronted with that fact or find it hard to resist temptation in the moment of decision. Ethical warning labels provide information at the right time and place to help such people live up to their own moral beliefs. The burden of proof is on objectors to explain why supporting people’s ability to make free choices should be seen as coercive.