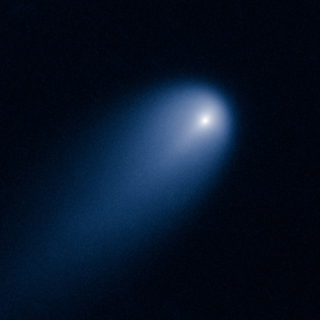 The early primordial building blocks of comets in the solar system, such as water, methane, ethane, carbon monoxide and hydrogen cyanide were swirling in the disc of material around the Sun. This material could not all form planets. Instead these piles of coalescing material were disturbed by the gravity of nearby massive planets. These objects were cast out. At a distance thousands of times further than the Earth's orbit a reservoir of trillions of lost objects was created; we call this reservoir of dusty snowballs the Oort cloud. Comet ISON remained quiet and unremarkable in the Oort cloud for billions of years. Perhaps a few millions years ago an interaction with another object or the gravitational tug of a passing star sent ISON on a quest towards the sun. Comets have had a mark in history since. Documented descriptions of comets date back to as early as 1000 BC. Around 500 BC the Greek word for long hair, kometes, was taken up as the name for comets by Greek philosophers (more on the origin of the word). They thought that comets were messages from the gods or oracles of disaster.

In 240 BC the first written evidence of the often returning Halley's comet was recorded by a Chinese historian, “During this year a broom star was seen at the north direction and then at the west direction.” Ominous as ever the comet foretold the death of an Empress.

Julius Caesar heralded the start of a new age for Rome when he took control of a nascent empire in 46 BC. By 44 BC the ides of March had passed, Caesar had been assassinated, and a brilliant day-light visible comet appeared in the sky. It was declared by Augustus Caesar to be the soul of Julius Caesar ascending to heaven and thus is was evidence of divine stature of the Caesar lineage. This poetically Augustan myth served the Caesars well.

In 1066 Halley's Comet ominously appeared in the sky. Duke William II of Normandy was assembling his legions from Normandy and France to cross the English Channel and invade England. The Bayeux Tapestry famously depicts the scene. A comet flies overhead as King Harold II is struck with an arrow in the eye. Comets are arbitrary changes in the sky, but people's collective response to comets has shaped the history of Earth. Comets are portents indeed.

On September 21, 2012 Vitali Nevski and Artyom Novichonok discovered a comet, using a .4 meter telescope that was part of the International Scientific Optical Network (ISON), hence the common name of the comet (which is actually called C/2012 S1). Observatories all over the world soon confirmed ISON's existence. NASA had over a dozen observatories trained on the object at one point. Comets are rare. Astronomer's understanding of this class of objects is imperfect. Each comet has a unique composition and orbit. Early evidence suggested that ISON would be the comet of the century. It would be brighter than the full moon, visible during the day, and it would dazzle for weeks. But as ISON approached the Sun its brightness varied erratically. At first it wasn't as bright as predicted, then is burst out like a shining star – indeed you could have just seen it with your naked eyes.

ISON's composition is that of dust, ice, and rock. It isn't a large object. At only about 2 kilometers in size its gravity isn't strong enough to shape it into a sphere. Think of it as an imperfect pile of rubble and gravel in space held together by ices. The ices in ISON heated rapidly as ISON approached the Sun and ISON was on a near collision course with the Sun. ISON was dubbed a Sun grazing comet. ISON spent some time so close the Sun that it was nearly impossible to observe, the luminosity of the sun overwhelms the eye and telescopes as well. On November 28th ISON passed within 1.1 million kilometers (or 700,000 miles) of the Sun while hurtling at a rate of 360 kilometers per second. ISON was ambitious, perhaps too much so. It appears that as it rounded the sun the solid core of it melted and disintegrated. An even looser cloud of dust and debris remain on the exact same orbit that ISON was on, naturally, but the core of the object hardly remains. Comet ISON gives us clues to the mystery of comets even in its wake.

The brilliant bright patch of light in the sky that was ISON is gone and any cultural impact that ISON may have had is muted. The requiem for ISON ends with a slow fade, not a triumphant finale. So, if there is a comet in the sky and no one sees it, was it ever really there? Yes, undoubtedly, surely, it is documented so. Yet, culturally the event is a splash quite unnoticed off the coast. This was Icarus drowning. 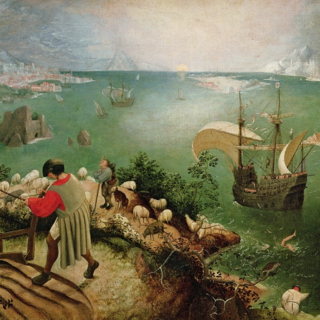 As a scientist I make the unremarkable prediction that tomorrow will be the same as today. Whether or not there was a comet seen, this remains the wise prediction. Perhaps astrologers or the lonely would have predicted revolutions or the end of the world. Some people would have probably listened to these wild proclamations with their feet rooted in fear. It is a reality of human nature that we pay attention to the alarming. We notice the red herrings. It is hard for scientists to shout excitedly about their expectation of normalcy. For that matter, the larger scientific endeavor is dogged by the human desire for novelty. An experiment with no affirmative result and a comet with no visible appearance are not noteworthy. Yet, let us take note.

May I venture to offer these words of condolences to ISON. ISON lived a simple life. In the end it had to give in to gravity and fire. It is survived by its trillion or so fellow Oort cloud objects. Those who did see it and to those of us who do ponder it now are the better for it. In its boldest moment of orbit it continues to inspire.

We get to know the sky, but it doesn't know us. The sky doesn't predict the actions of humans, but it inspires our actions. The change we may seek in our lives is not dictated by comets in sky, though they serve as a powerful reminder. Take the unrealized potential of a comet you never saw to be a reminder to look up at the sky and consider all of this. The missed opportunity of looking up at the sky would be our real loss.