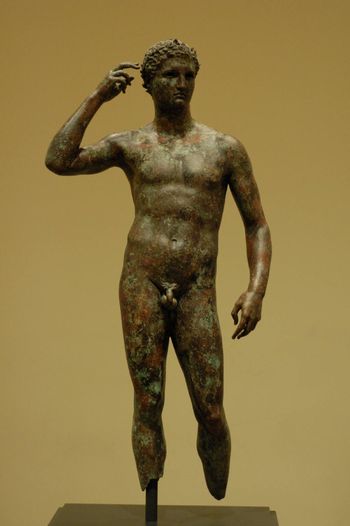 Not unlike the stories surrounding my favorite Carpaccio painting, my beloved bronze is surrounded in mystery and romance.

Utterly compelling, whenever I used to come home to LA, one of the first things I would long to do was to pay him a visit. He is so breath-takingly handsome –that truly a lifetime of visits to see him would never be enough. Physically perfect and with the most exquisite patina, it is that hand, pointing toward his victory wreath that always gets me.

Created between 300–100 BCE, the Getty Bronze is a victory statue celebrating a youth's win in one of the Greek Olympic Games. Perhaps he was the son of a wealthy family who wanted to commemorate their golden boy's athletic achievements. Such a beautiful start. But then several hundred years after his creation, the Romans literally ripped his feet off when dragging him back to Rome as booty (maybe for melting down since so little care was taken to pry him off his pedestal?)

That was not the end of his bad luck either, for he would then to sink to the bottom of the cold waters of the Adriatic when the ship carrying him went down–presumably in a storm.

My bronze beloved would spend lifetimes down at the bottom of the sea– until finally in the summer of 1964, some Italian fishermen from Fano pulled him in from what was international waters between Italy and Yugoslovalia. When they first pulled him out of the water, the fisherman thought it was a dead body. But it only took a moment to realize that no, weighing in at over 300 pounds and covered in heavy marine encrustations, he was a priceless bronze statue.

After cleaning him up as best as they could, the fishermen sold him to a local art collector from Gubbio, who paid them around $4000.

Word was out, though, that he could be the work of one of ancient Greece's greatest sculptors of all–Lysippos. Sculptor to Alexander the Great, Lysippos was known for his statues of athletes. And this was no ordinary statue.

So, the art collector first hid the statue in a cabbage field before eventually smuggling it out of Italy– just one step ahead of the Carabinieri, who were hot on the trail! After being hidden in Brazilian monastery for several years, under the murkiest of circumstances he was purchased by the Artemis Group, a Luxembourg-based art investment consortium, for $700,000.

It was then that his career finally took off.

When one of the members of the art consortium first caught sight of my beloved, he was said to have felt a chill go up his spine (which I also experience on every occasion I see him). It is something in that enormously fetching backward tilt of his head. He is arrogant somehow –in the best possible way. And why not, for he stands as the perfect embodiment of male beauty. And for a second time by the dealers at Artemis, he was thought to be the work of the great Lysippos.

Carbon dating proved that he was ancient and he finally received the stamp of approval of the emminent British museum keeper of classical antiquities, Bernard Ashmole.

It was then that the dealers approached J. Paul Getty.

In fact, this discussion is interesting in the context of another great statue– a statue that I have not yet managed to see. But, does anyone recall the rise and fall of the Apollo Belvedere? In Joseph Alsop's very unique book, The Rare Art Traditions, the author uses the Apollo Belvedere to illuminate the profound way our Western way of looking at art has changed over the past 150 years (in great part– he explains– due to the decisions and opinions of art historians and the art market). 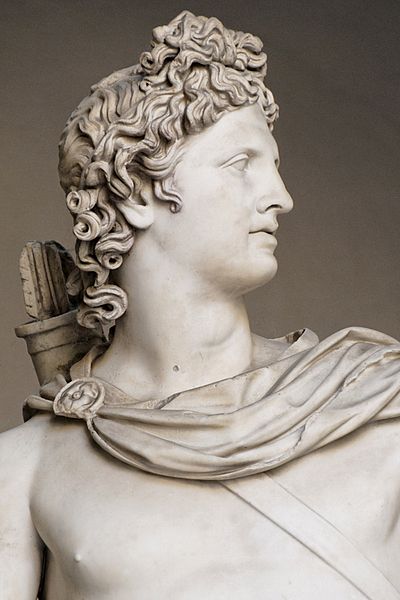 The Apollo Belvedere is a fascinating story.

The statue has always been believed to be a Roman-time marble copy of a Greek original bronze made by Leochares. The Romans of imperial times had a huge liking for Greek art and there was a thriving industry to make marble copies of the original bronzes to be used as decorations in the villas and gardens of the wealthy. They were used like wallpaper or outdoor decorations, explains Alsop.

Jump ahead a thousand years, and again Italy can be seen turning her lovely head toward the East, as once again the ancient Greeks were held up as the great pinnacle of culture, civilization and art. And as they had in the past, Italians of the Renaissance pined more than anything. Indeed, anything at all from classical times was coveted and admired, from ancient books to pieces of classical sculpture. Vasari spoke of the vast collection owned by Lorenzo Ghiberti, who was described as being proud to own a single Greco-Roman bronze leg!

To feed the great hunger of the Italians, Rome was under constant excavation. Although classical pieces were found on almost a weekly basis during the early Renaissance, to uncover an almost completely intact marble– well, the Apollo Belvedere was destined for high fame! Bought by an art-collecting Pope, the Apollo was practically enshrined in the Vatican's Cortile del Belvedere .

For the next 350 years, the Apollo Belvedere was to remain the “statue of all statues;” and the “most admired sculpture in the world.” During Victorian times, people of means, as part of their liberal arts education, went on tours to visit the great sights of France and Italy. Called “The Grand Tour,” these trips abroad were thought to be like the crowning of a fine education; providing real life experience which could not be learned from books (讀萬卷書，行萬里路). The trips were undertaken with the aim of enriching both the mind and the spirit of the sojourner.

This was, after all, a time when people still believed that a person could cultivate their heart and mind through the aesthetic appreciation of beautiful things, and the Grand Tour was a social practice which grew out of this concept.

Not only was the Apollo Belvedere part of the Tour– it was the main attraction. Goethe claimed to have been “Swept off his feet” by the sculpture while 18th century archaeologist and classical historian J.J. Winckelman said that the Apollo Belvedere was “the consummation of the best that nature, art, and the human mind can produce.” It was indeed the must-see for anyone on a Grand Tour. A description of the wig worn by amateur Cellist Count Mateeuz Wielhorski is described in a book I am reading right now as being “curled a l'Apollo Belvedere.” The statue had a profound influence during its day.

What happened? As Alsop says, “Few make the lonely trip out to look at the Apollo Belvedere any longer.” And for those that do, what do they see? Are we even capable of really looking at ancient sculpture any more?

In an age of Asian art and impressionism, JP Getty was stunningly unique in his commitment to classical European art. Well, the museum is unique in 2 ways for which it is most famous: one is the content of its collection but the second is its huge purchasing endowment, which I heard (but have a hard time believing) is equal to the total combined purchasing budget of all the other museums of the world! The Getty has a staggering amount of money to play with and no other museum stands a chance. Because it can literally buy the national treasures of a country right under that country's own nose, the Getty has been involved with many scandals as well.

Hence, Artemis went to talk to J. Paul Getty to see if he would buy their boy.

Getty wanted a detailed inquiry into its provenance, or title history. And by then the Italian police were banging on Artemis' doors.

It was not until two decades later–when Getty was already dead, that the museum would purchase the statue. And, the Italians have not given up their claims to it. In the words of Derek Fincham, of Illicit Cultural Property:

The question is not whether the Bronze was illicit when the Getty trustees made the decision to acquire it. It most certainly was, and still is. The question now is whether the Getty will be able to continue to retain possession.

It is a fascinating case, because the Getty directors of the time knowingly purchased illicit cultural property. This is against all expectations for what a museum should stand for and goes against the UNESCO conventions that most US museums are also bound to. My beloved had been illegally removed from Italy ahead of a police investigation and sold under an extremely murky and unsavory context.

But, who does the bronze really belong to? The Italians are demanding the statue based on what? It was debatably not even found in Italian waters—so at most we can say that it was discovered by Italians off the coast of Italy. But this statue is Greek. And yet it is the Italians who are demanding it back from the Getty.

The Italians certainly have a case based on how the piece was smuggled out of the country, but the statue–unlike the Aphrodite, which they recently returned to Italy or the other works returned to Greece (or likewise that of the Elgin Marbles) –is not a national treasure of Italy or serve as an irreplaceable object of the country's cultural patrimony, does it? For if Italy has a claim based on illegal looting and sale of the bronze, Greece must surely also have a claim to the statue.

Talking about these things with my other Beloved (the non-bronze one), he says to me: “He is beautiful I guess but a little quiet… I think we make a better couple!” To which I agree, and then he asks: “I wonder where he would like to end up?”

That is indeed being the real question.

For more on the Getty and their illicit purchases, I highly recommend Chasing Aphrodite. Also recommended is, The Victorious Youth by Carol Mattusch–for its stunning photographs of my man.