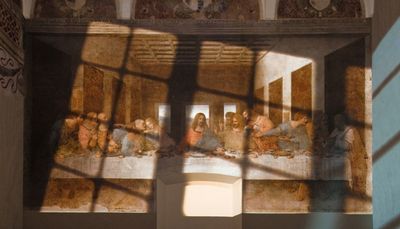 Talking about sacred music the other day, the Rabbi quite unexpectedly said, the name Bethlehem means the “house of bread,” or “the house of lambs for sacrifice.” Just think about *that* for a minute.

Sacrifice. Whether understood in the traditional ritual do ut des terms familiar throughout much of Asia; or in the liturgical terms of the Eucharist; or even in the grisly terms of ancient Mediterranean polytheism–I wonder whether these acts haven't served to help to lead us away from the dangers of self-deification (even if it leads to other perils).

Binding the individual in communion with others, ancestors, and gods: this call to transcendence was certainly what was behind Guru Dreyfus and Kelly's book, All Shining Things. For as Heidegger famously said, “Only a god can save us.”

My own interest in this topic goes back to Carthage. Always and forever dreaming of time-travel, ancient Carthage was for a long-time my top choice destination. Hannibal-obsessed, I thought Carthage would be an interesting place to see. That is, until a friend re-minded me that the Phoenician custom of child sacrifice was practiced notoriously in Carthage. (I only have one son, after all!)

Stanford University professor and archaeologist extraordinaire Patrick Hunt is also pretty obsessed with Carthage. He is yet another great man in a long line of great men in search of Hannibal's route across the Alps.(That is John Hoyte crossing on elephant in the picture below). In Hunt's Carthage lectures he talks about the Carthiginian god Ba'al Hammon. This Baal was the same Baal known in the Bible as Ba‘al Zəbûb. Translated as “Lord of the Flies,” Hunt says this word is a visual image depicting the innumerable flies attracted to the massive amount of offerings of raw meat that were sacrificed to the statues of Ba'al in Can'an. It was all so long ago, and yet no matter what sources you read, whether Biblical or Roman historical– it seems conclusive that the Canaanite religions centered around sacrifice –sometimes human. And this was notoriously so at Carthage. 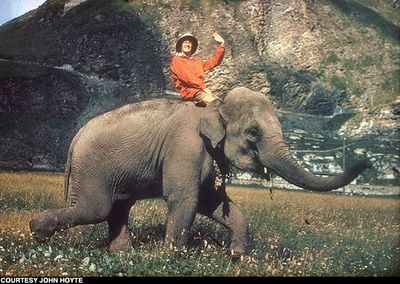 Ba'al, or Ba‘al Zəbûb, was the Beelzebub of the Bible. And, it was to the custom of child sacrifice about which Abraham was to manifest the big break.

That was the context.

Abraham was prepared to do what others had done before him. Sacrifice his son. In Carthage, especially child sacrifice was practiced on a large scale– and they were mainly boys' bones found in the urns, I believe. But, as Abraham steps up an raises the knife, God stops him. Knowing that Abraham fears God, God thereby allows a ram to be sacrificed instead. This was a fundamental moment for all three Abrahamic religions–still celebrated every year in the Feast of the Sacrifice of Eid al-Adha, for example.

One of my very favorite philosopers Kierkegaard had a life-long fascination with this story. Like a lot of people, I think he found it absolutely outrageous. Indeed, not long before Kierkegaard, Kant had came right out and said that Abraham should have stood up to this so-called voice of God–for in its pure irrationality, how could it truly be God?

The Maverick philosopher lays out Kant's argument below:

1. It is certain that one ought not kill one's innocent son.
2. It is not certain that a seemingly divine command to kill one's innocent son is truly a divine command.
Therefore
3. One ought to trust one's moral sense and not the putative divine revelation.
Therefore
4. “. . . if it [a scriptural text] contains statements that contradict practical reason, it must be interpreted in the interests of practical reason.” (65)

Kierkegaard begins here as well, and I guess he would even get as far as Kant's #2. However, Kierkegaard goes on to draw a very different conclusion than Kant; for he posits that above human reason, there is an even higher realm– which he calls that of Faith. And through what is a “leap of faith,” the rational is subsumed into something which stands outside of reality and is beyond logic and reason. It is in this way, according to Kierkegaard, that the Knight of Faith overcomes death.

Kierkegaard, being a Lutheran philosopher, would naturally make this move to retain faith vis-a-vis sacrifice (ie, a passionate commitment that one would die for). I mean, with Kierkegaard's existentialist Christianity, one cannot really help but appreciate this move full circle from human beings sacrificing to God to God sacrificing for human beings (whom he created out of love and a longing to be known–says yet another of the Abrahamic religious traditions).

“This is my body which is for you. Do this in remembrance of me.” (Corithinians)

Some have compared the Eucharist to a kind of cannibalism. It must have absolutely scandalized the Jews of the time to hear this message: eat my flesh, drink my blood… However, we know in the ancient Greek rites (for Dionysius, for example), there was a similar sacrifice where God was consumed for purification and communion. Indeed, since the beginning of time, humans have sacrificed to God — as they have also eaten the flesh of their God.

In the places I have lived–far, far beyond the reaches of the Abrahamic traditions– sacrifice (in the form of offerings and festivals) and communion (in the form of communitarian values) is a part of life. In Japan, Hong Kong, Bali… just to name of few, people regularly make offerings and participate in communal festivals, and I think it is safe to say that there too, this comes from a similar belief that in the pouring of self (ie sacrifice) there comes an increased Being.

Dreyfus calls this a transcendent experience. But it is also a “binding” experience. Jane Harrison, in her book Themis, would say that, “the communal feast, the renewal of group unity, and the definition of the individual reborn as part of the social group is a symbolic feast; for Communion will always be both feast and sacrifice.”

I really liked this recent essay by Mark Morford in which he sees variations of extremism in terms of dis-connection. I too think the extremism seen in the US points to a communal coming apart; or as Morford says “Extremism implies disconnection. And more extreme = more disconnection.”

He goes on though:

But the good news is, it also begets the opposite: more compassion, education, distinction, discretion, patience, quiet, inner focus also equal calm, stability, peace. Does it make sense? The old gurus only smile at your panicked expression: Why are you so freaked out by stillness?

Why indeed? Except of course, that I am not sure that extremism and dis-connection can, in fact, lead to more compassion, patience, inner focus, etc… But, it would be nice to think so, though.

Thanks to Jeff Richey for being part of the conversation.