The analysis that follows is quite simple. I’ll be taking a simple average of polls conducted each year in the final 21 days of the campaign and comparing it against the actual results. There are just two restrictions.

First, I will be looking only at polls of likely voters. Polls of registered voters, or of all adults, typically will overstate the standing of Democratic candidates, since demographic groups like Hispanics that lean Democratic also tend to be less likely to turn out in most elections. (The FiveThirtyEight forecast model shifts polls of registered voters by 2.5 percentage points toward Mr. Romney for this reason.)

Second, the averages are based on a maximum of one poll per polling firm in each election. Specifically, I use the last poll that each conducted before the election. (Essentially, this replicates the methodology of the Real Clear Politics polling average.)

Let’s begin by looking at the results of national polls for the presidential race. 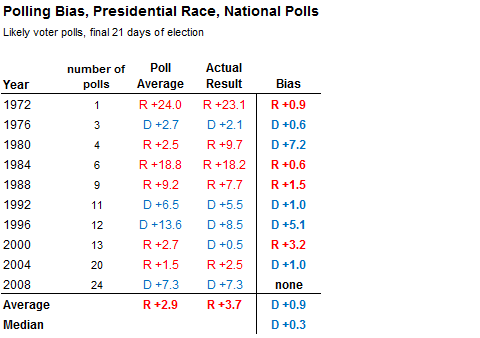 In the 10 presidential elections since 1972, there have been five years (1976, 1980, 1992, 1996 and 2004) in which the national presidential polls overestimated the standing of the Democratic candidate. However, there were also four years (1972, 1984, 1988 and 2000) in which they overestimated the standing of the Republican. Finally, there was 2008, when the average of likely voter polls showed Mr. Obama winning by 7.3 percentage points, his exact margin of victory over John McCain, to the decimal place.