This is an extract from a work in progress… a short story, perhaps. Let me know what you Think.

Tinkering with his iron fragments the stooping figure beads in sweat so as this heat won’t extinguish him. Seven steps astride him pink-lipped petals set the wind a moving; seeds at depth force Earth versus its sky; a honey coloured beetle arranges its deathbed, a future in revolt against the flowers. These meadows offer little for the tinkerer, since not a war’s been fought amongst them for such an age as all that’s left is ruby rust. Still, he cricks his spine in sensing, gouging his cart a track along which to guide it, and wanders over the meadow banks; wanders a crest a thoughtless dream in search of iron scraps. 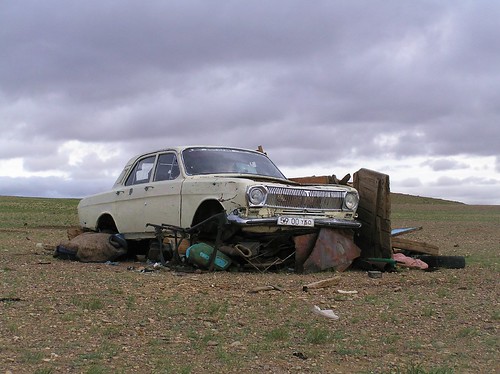 As a life he’d had plenty enough, seen such a family of moons not a starry gaze could count them. On colder days the river banks took hold of the ice, painting memories for him of years past when the water flowed a different path. Each icy bed locking inside the clutter of pictures which made him. Only when the water was solid did any time seem long enough for the tinkerer, but this coming winter would be his last; so The Thinker had told him. At sunrise the meadow stole at the night, tinkering itself the last of the dew across its banks to wake the birds in freshness, slipping silken tongues into worlds of water atop each sliver of grass. Soon this would stop, the tinkerer knew, turn to ice each morning, locking away the tinkerer’s delights in prisons of frozen earth. Winter was a time for musing. Not a patch of iron was he to find when all was thought about him, in the season of his death.

He sits now, sunken amid the horizon of the town far off, and picks at his toenails with a shard of metal. This nail barks back, a yellow light erupting through at the chisel of his finger tips. Some feet are these. Noble in their decrepitude, each so thick with age as to mention their memories in a wrinkle; a lingering line tearing at tufts of grizzled hair. One toe is missing, lost at the snarl of winter. Numbed to black. Snap. The tinkerer remembers that toe more than any other. Sumptuous it is in the pictures of his eyes. His eyes are the seeing things he owns, the hands the feeling. Yet the picture is neither seeing, nor feeling, but child to both. A reflection of the lost tinkerers which once grew here within him, which once gazed sidelong to picture he. The Thinker muses this. In the town soaked with light, from first dew to night, The Thinker resides. Calls his people to him to hand them a dream or two, a word making a memory, a thought planting its seed. Not in the meadow does The Thinker live, nor the tinkerer for that matter. The town beckons he.

Folding into sweat sodden clothes the splinter of metal, the tinkerer rises now, lifting on tinder legs the arching crease of an ancient spine. And back down the track, the town coming forward, he commencing on, with his cart of rusted iron and his eyes soaked deep with pictures past. There shoots a rabbit, piecing together a world in its darting gallop as the meadow sells it silky green leaves on which to munch. Above, a black shadow soars, teasing the air in its curdled motions, smearing a tunnel of pictures past onto the tinkerer’s decaying gaze. This is the meadow all about, muses he, and I am the last tinkerer.

“Here comes he! I’ll wage thee a morning of Thinking that this will strike him down.” At the edge of the town, perched crow-like on the branch of the most ancient of oaks, pick the young men at their sticks of salted meat. Three boys savour the tinkerer off way ahead; one wields a circle of gristle to project at he.

“He moves slower than the seasons brother, ‘tis not a target I’d care you’ll miss, but knock down?! Not in a thousand moons.”

“There is no want for fun in you brother. Watch the tinkerer, watch him fall.” In a crooked claw the boy rests his gristle of meat, sets his eye on the tinkerer, lest he know little of these boys’ intentions. A third figure, not brother to either before, raises an intimate eye as if in muse of this. His words roll under his breath, seep quiet out like saccharine drips from ripened fruit.

“’Tis of The Thinker’s muse that each action is echoed an equal reaction. The tinkerer’s fall will cause thee an intention my friend. Be wary of this.” He rests back now, gnaws solemn like on his salted meat; catching an eye from his vindictive partners.

“Keep your muse to yourself.” With that, and an arcing elbow, the disc of gristle takes hold of the breeze, soars abreast the town’s sullen river. In clattering atonement the tinkerer bears his load, a final push through auburn brambles until the town walls welcome he. Striking solid and against his temple, the sinew of meat breaks his progress; a spray of iron jumps out the cart. Lies he now all about amongst his rusted wares. Just then, a crescendo of mirth erupts from underneath the oak’s canopy. This does rise so high as to beckon the sun to follow in jest. The tinkerer, wheezing through hot red confusion, clambers arm over arm onto stubborn limbs. His cart stables he.

“No better have I seen my brother, not ever better!” At this the second brother congratulates the first, slapping hard upon his quaking back; a force too much. Teetering such that any misplaced weight could break his balance, the brother topples forward now. His laughter ceasing, he claws at his brother so as to find his poise once more, but drags both across and off the old oak branch. Solid earth welcomes a fall. Crack. Boy number three does laugh most reflexively.

The tinkerer’s stiff frame barely offers his mind a vehicle within which to hide. Its joints swollen in rebellion at the many moons thus travelled under. In his eye the falling sun catches a token of shadow, past brambles and beneath the oak. A clatter of motion and heaped there abouts two brothers of the Keraack family; their name chosen of the mountain. The tinkerer moves himself now. The bramble skeletons catch at his rags, tearing greater holes where time has told them. Picking slowly at his iron wares he fills his cart once more, tempting the coming winter, with each dip of his spine, to freeze the life from he. At a last motion he sees below him a third figure chide the mountain brothers. This boy, proud in gait, wears a conifer leaf crown about his head. His solitary mirth, the tinkerer muses, is born of the darkest forest. A musing and a doing kind is he, there, aiding his cohorts beneath the old oak tree.

As if to wake the stars in hiding, the town bell does now knell out across the deepening sky. Three boys, caught by ear, chide each other, glance back up at the lonely tinkerer before they head off running into town. This hour be The Thinker’s, the tinkerer now muses, beckoning the people of town and field in praise of he. In a sidelong glance, not of this space, but out along the breadth of his life, the tinkerer muses times past when folks discerned the birth of The Thinker. These lowly occasions – these days, these many moons all abouts – not a soul, but the tinkerer knows of how this era came to be. That in a timeless world, spread out in thin segments across an ancient landscape, not one but he could see, could really see the pictures there abouts, hurt the tinkerer at such a depth, that not the sun and moon combined could shine upon his cavernous being. The bell knells on now, rings at the ears of the meadow, the forest, the river and the mountain. Rings at the shuddering pictures of the tinkerer. Draws him onwards, through auburn bramble, across sullen river and past the old oak tree. The town welcomes he, the last tinkerer.

Addressing the town, on withered limbs set one before the other, the tinkerer now moves. A squirming channel of earth stretches ahead of he, one of many roots weaving out, and through the town from The Thinker’s skyward tower. Here crouches a river child, smokes day-old fish over chestnut scented coals. At the corner, knee deep in sunken pit of filth, a naked shaman chants his wares; one vigorous arm waves over his other. He calls a tale of desperation, said to lead all manner of people, whether of town or field, into a maelstrom of their muse.

Before he, the tinkerer eyes three ancient stumps composed in twisted metal, each abode in praise to sky, their doors draped with moth-eaten leather. From beneath one cloth a shrivelled hand does move, sweeps back and catches the tinkerer’s nose in clouds of multifarious intensity. Damp heather; the festering blood of day-old mule; bone shavings in honey; a mix all of each. The tinkerer offers his cart ahead of he to a further stooping figure, encased in shawl of black. As in an eye one sees not just the light, but the feeling; the muse, so the tinkerer does see more in she than mere darkness. An eye meets an eye across the dirt coloured path. Both muse does merge.

“I’ll levy thee a Thought or three my tinkerer. That rattle does ne’er abound a more shattered miser as thee.” She croaks, stepping aside to welcome he. Plucking at but one rusted morsel, the tinkerer lumbers on, nods casual like at her placidity. Into her cavern.

“Sit. Lift what weight one has a step closer to sky.”

Once in, the cloth collapse back, taut. To the tinkerer’s daylight eye this all a grey does make; merge angle to colour, shape to cloud, until the sight settles on candle shine. On centre stove roast seven iron pots, a different consistency each to make. Over door, plunged deep into her shack’s archaic metal, protrude the skull of her husband; a scrap or two of skin clung to bone. This the tinkerer knew, ‘twas he who severed the last of the flesh from the carcass.