BEGINNING IN 1997, an important change swept over cotton farms in northern China. By adopting new farming techniques, growers found they could spray far less insecticide over their fields. Within four years they had reduced their annual use of the poisonous chemicals by 156 million pounds – almost as much as is used in the entire state of California each year. Cotton yields in the region climbed, and production costs fell. insecticide-related illnesses among farmers in the region dropped to a quarter of their previous level. 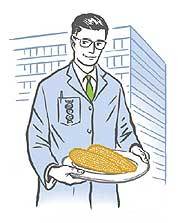 Strikingly, the number of insecticide-related illnesses among farmers in the region dropped to a quarter of their previous level. This story, which has been repeated around the world, is precisely the kind of triumph over chemicals that organic-farming advocates wish for.

But the hero in this story isn’t organic farming. It is genetic engineering.

The most important change embraced by the Chinese farmers was to use a variety of cotton genetically engineered to protect itself against insects. The plants carry a protein called Bt, a favorite insecticide of organic farmers because it kills pests but is nontoxic to mammals, birds, fish, and humans. By 2001, Bt cotton accounted for nearly half the cotton produced in China. For anyone worried about the future of global agriculture, the story is instructive. The world faces an enormous challenge: Its growing population demands more food and other crops, but standard commercial agriculture uses industrial quantities of pesticides and harms the environment in other ways. The organic farming movement has shown that it is possible to dramatically reduce the use of insecticides, and that doing so benefits both farm workers and the environment. But organic farming also has serious limits – there are many pests and diseases that cannot be controlled using organic approaches, and organic crops are generally more expensive to produce and buy. To meet the appetites of the world’s population without drastically hurting the environment requires a visionary new approach: combining genetic engineering and organic farming.