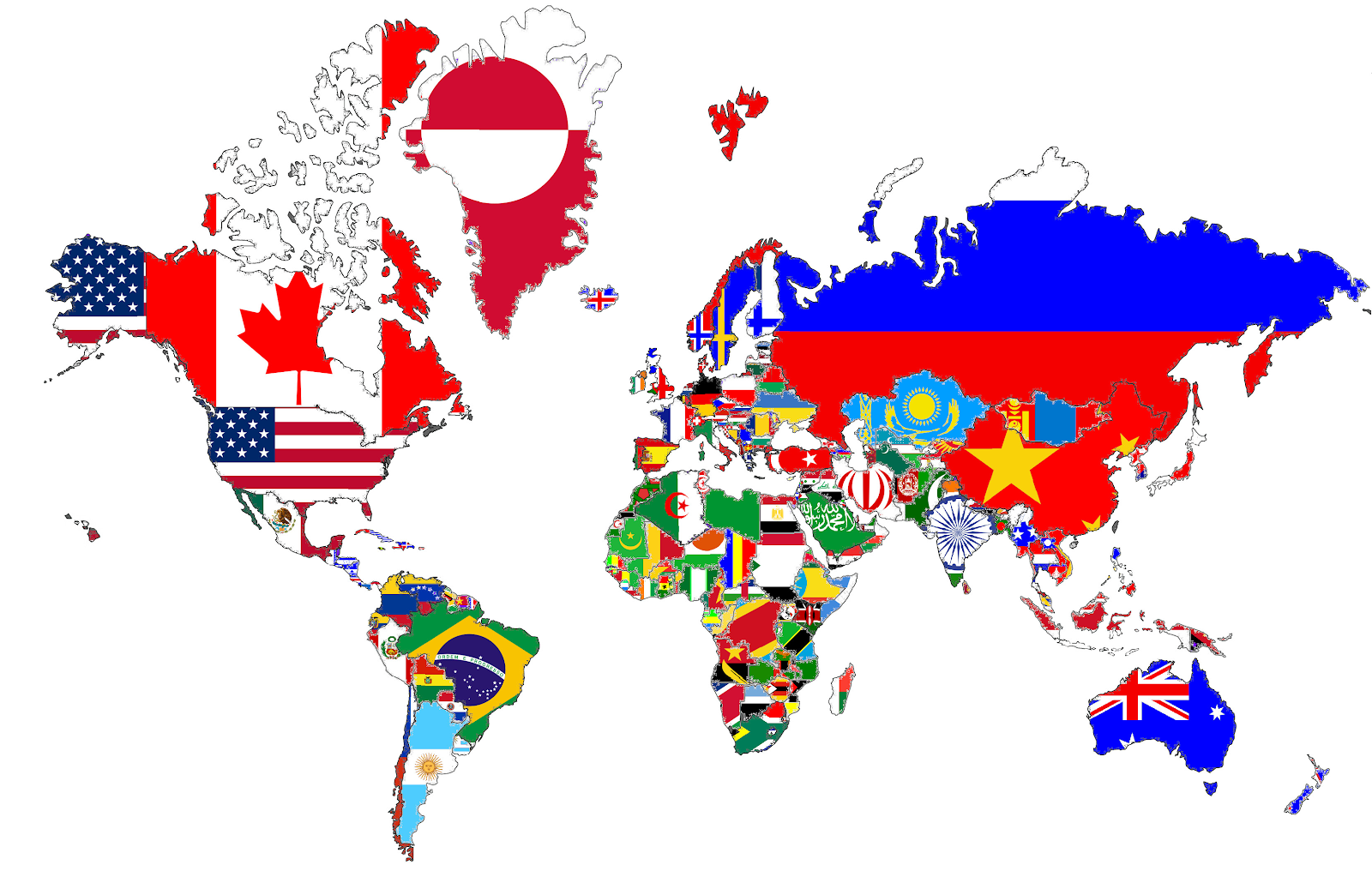 Countries exist. They are places on the map which have a political identity and borders and which people or things can live in, come from, or go to.

But countries are not anymore than that.

Firstly and most obviously, countries are merely a social construction. They are collectively produced fictions (like money or religions) rather than mind-independent objects (like stones). Being fictional does not mean that countries do not matter, but it does mean that they only exist so long as enough people agree to act as if they do.

Secondly and more significantly, countries are locations, not organisations. Organisations are things like armies or corporations that convert groups of human individuals into a coordinated and powerful actor. Unlike countries, organisations are a kind of collectively produced fiction that can actually do things, often very significant things. What we call governments are a particular kind of organisation, one that has achieved the power to make and enforce rules over the inhabitants of a country, for example by hurting those who persist in daring to disagree and by preventing outsiders from entering. (In Max Weber’s famous definition, it “successfully claims a monopoly of the legitimate use of violence”.) This power is called sovereignty and it is an attribute of governments, not countries.

A common mistake is to confuse a country with its inhabitants with its government. This leads to statements that are strictly meaningless at best and deeply misleading at worst because they are category errors on the order of ‘Green ideas sleep furiously’.

Sometimes the error is to confuse the actions of governments with that of a country, as in the statement that ‘Russia has invaded Ukraine’.  Countries cannot invade each other. Invasion is an action in pursuit of a goal, and countries lack the capacity for either. It is more accurate to say that the organisation that rules Russia is presently challenging the sovereignty of the organisation that rules Ukraine (and that many Ukrainians would prefer to keep the organisation they have). If we don’t keep this straight we end up foolishly blaming things that happen to come from Russia (like university students) or are merely associated with Russia (like vodka brands) for the terrible things now happening in Ukraine. Not only will this fail to do anything about the real cause of the problem (the organisation controlled by Vladamir Putin), but it can also add an awful lot of unnecessary harm (as in the practise of interning civilians with the wrong ethnicity during wars).

This category error is deeply entrenched. For example, modern countries/populations are routinely blamed for historical injustices such as colonialism. Of course it makes no sense to blame a place or the people who happen to live there right now for the evil actions of long-dissolved governments. Yet humans seem to have a built in drive to assign blame that rises in proportion to the awfulness of an event and leaves us reluctant to accept that no one and nothing can reasonably be held responsible. Philosophers are unfortunately not immune to this and some of them devote great effort to developing complicated arguments for the guilt of the current inhabitants (always of rich countries). Sometimes this is merely a waste of time. Sometimes it may be a dangerous distraction from achieving consensus on the real problem to be addressed, such as around climate change.

Sometimes the error goes the other way, and the actions of non-government organisations are confused with the actions of governments/countries.  For example, far too many people believe that countries literally trade with each other, when what is really happening is various people and commercial organisations trading with each other across political borders. It no more makes sense to say that ‘the UK’ and ‘Italy’ trade with each other than it does to say that ‘London’ and ‘Manchester’ trade with each other. Likewise, it is true that international trade takes place under the (often jealous) watch and rules set by the relevant governments, but this does not mean that the governments themselves are trading with each other. A great many tirades about global injustice turn on the misconception that powerful countries extract cheap resources and goods from poor countries by exploiting their monopoly power to offer unfairly low prices that poor countries can’t refuse. But insofar as companies are free to compete with each for the best deals, wages will reflect average economic productivity, not the relative bargaining power of the two countries.

It is thus important to note that the inhabitants of a country are not united. We frequently speak of nations as if they were a kind of unitary organism, but this is not true. The inhabitants of a country will probably have many things in common (interests, languages, values, rulers, history, etc), and some of them will even be members of the ruling organisation, but this does not make them parts of one creature. The only kind of creature that could achieve such unity is an organisation, and a people is not an organisation (except in totalitarian political fantasy), and even if it were, the price of such unity would be the subsumption of individuality under hierarchy. Thus there is no such thing as the general will of a people because the unitary entity implied by the phrase cannot exist. If you want to work out what the inhabitants of a country want there is no alternative to a social choice exercise. You have to ask them – and give them the chance to talk to each other about what they care about – and then find some fair way to represent those interests weighted by their relative significance to different people.

Such exercises in social choice are tricky even in the best of circumstances, which is why democracy feels so unsatisfactory to so many. Where governing organisations do not care to allow their people to talk freely to each other and discover what they want it can be entirely blocked. So when such governments claim to be acting in the interests of their people, or their place on the map, we should be duly sceptical. Especially if their actions, like those of Russia’s government, seem to go against many generic practical interests (such as for public goods like security and a prosperous economy) that humans everywhere tend to have no matter where we happen to live.

Governments routinely claim to represent the country and inhabitants that they rule over, and this is often presented as evidence of their legitimacy. But there is no plausible way besides democracy in which such a relationship of representation could be established (and even there it is fraught). In practise when a non-democratic government claims to represent its people it is simply a demand for the mutual recognition by other governments of their local monopoly on violence. As a practical matter it might be prudent to respect such a government’s power against interference in its way of ruling the people under its power. But we should not mistake this kind of accommodation with the acceptance of the credibility of such governments’ claims to be representing anything but their own interests. Just as it is easy to conceive a gap between the interests of a corporation and the interests of many of the people amongst whom it operates, so it should not be hard to understand that there is also a gap between the interests of governments and those of the people they rule over.

So what are the interests of governments? In one sense this is easy: to survive and to serve the interests of their members in proportion to their relative power. In what Douglass North and his co-authors call ‘natural states’, governments are merely coalitions of powerful elites who have come to a mutually beneficial arrangement for the sustained extraction of wealth from the population under their power. In some cases such coalitions become dominated over time by few, or one, individuals, in which case their interests will prevail and there will be more room for their particular whims to determine actions (though still subject to their overriding concern to maintain their rule over the government and the government’s rule over the territory and population). There are only a few societies in the world governed by open political competition and impartial legal institutions where the interests of governments can be said to depend upon fulfilling their own promises or the expressed preferences of a substantial proportion of their inhabitants.

People live in countries and are ruled over by governments. It is important to keep each of these three elements distinct and clear so that we can prevent the relentless category errors that confuse public discussion of international affairs. For example, the influential realist account is built on the assumption that countries do (or ought to) act only in their national interest. This account trades on two category errors: that countries (rather than governments) act and that there is such a thing as a national interest. This tends to produce unfalsifiable nonsense about buffer zones and access to resources, but due to the underlying confusion it sounds good and can still be sold. In particular, we should pay more credence to actual people and less to the organisations who claim to be their legitimate representatives merely because they have the power to hurt them. There are many tyrannical governments in this world. Their leaders may declare that they act in the name of the populations and territories they rule but they remain the ones responsible, the ones who should be held to account.