Why is the number of friendships that we can actively maintain limited to 150? The evolutionary psychologist and anthropologist Robin Dunbar at the University of Oxford is a pioneer in the study of friendship. Over several decades, he and his colleagues have investigated the nature of friendship and social relationships in non-human primates and humans. His research papers and monographs on social networks, grooming, gossip and friendship have accumulated tens of thousands of academic citations but he may be best known in popular culture for "Dunbar's number", the limit to the number of people with whom an individual can maintain stable social relationships. For humans, this number is approximately 150 although there are of course variations between individuals and also across one's lifetime. The expression "stable social relationships" is what we would call friends and family members with whom we regularly interact. Most of us may know far more people but they likely fall into a category of "acquaintances" instead of "friends". Acquaintances, for example, are fellow students and colleagues who we occasionally meet at work, but we do not regularly invite them over to share meals or swap anecdotes as we would do with our friends.

Dunbar recently reviewed more than two decades of research on humans and non-human primates in the article "The Anatomy of Friendship" and outlines two fundamental constraints: Time and our brain. In order to maintain friendships, we have to invest time. As most of us intuitively know, friendship is subject to hierarchies. Dunbar and other researchers have been able to study these hierarchies scientifically and found remarkable consistency in the structure of the friendship hierarchy across networks and cultures. This hierarchy can be best visualized as concentric circles of friendship. The innermost core circle consists of 1-2 friends, often the romantic partner and/or the closest family member. The next circle contains approximately 5 very close friends, then progressively wider circles until we reach the maximum of about 150. The wider the circle becomes, the less time we invest in "grooming" or communicating with our friends. The social time we invest also mirrors the emotional closeness we feel. It appears that up to 40% of our social time is invested in the inner circle of our 5 closest friends, 20% to our circle of 15 friends, and progressively less. Our overall social time available to "invest' in friendships on any given day is limited by our need to sleep and work which then limits the number of friends in each circle as well as the total number of friendships. 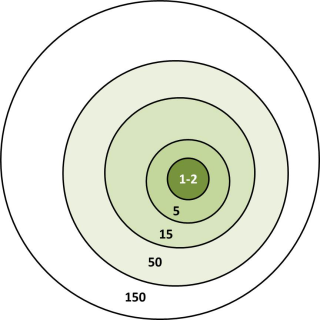 The second constraint which limits the number of friendships we can maintain is our cognitive capacity. According to Dunbar, there are at least two fundamental cognitive processes at play in forming friendships. First, there needs to be some basis of trust in a friendship because it represents implicit social contracts, such as a promise of future support if needed and an underlying promise of reciprocity – "If you are here for me now, I will be there for you when you need me." For a stable friendship between two individuals, both need to be aware of how certain actions could undermine this implicit contract. For example, friends who continuously borrow my books and seem to think that they are allowed to keep them indefinitely will find that there are gradually nudged to the outer circles of friendship and eventually cross into the acquaintance territory. This is not only because I feel I am being taken advantage off and the implicit social contract is being violated but also because they do not appear to put in the mental effort to realize how much I value my books and how their unilateral "borrowing" may affect me. This brings us to "mentalizing", the second important cognitive component that is critical for stable friendships according to Dunbar. Mentalizing refers to the ability to read or understand someone else's state of mind. To engage in an active dialogue with friends not only requires being able to read their state of mind but also infer the state of mind of people that they are talking about. These levels of mentalizing (‘I think that you feel that she was correct in …..) appear to hit a limit around four or five. Dunbar cites the example of how at a gathering, up to four people can have an active conversation in which each person is closely following what everyone else is saying but once a fifth person joins (the fifth wheel!), the conversation is likely to split up into two conversations and that the same is true for many TV shows or plays in which scenes will rarely depict more than four characters actively participating in a conversation.

Has the digital age changed the number of friends we can have? The prior research by Dunbar and his colleagues relied on traditional means of communication between friends such as face-to-face interactions and phone calls but do these findings still apply today when social media such as Facebook and Twitter allow us to have several hundred or even thousands of "friends" and "followers"? The surprising finding is that online social networks are quite similar to traditional networks! In a study of Facebook and Twitter social media networks, Dunbar and his colleagues found that social media networks exhibit a hierarchy of friendship and numbers of friends that were extremely similar to "offline" networks. Even though it is possible to have more than a thousand "friends" on Facebook, it turns out that most of the bidirectional interactions with individuals are again concentrated in very narrow circles of approximately 5, 15 and 50 individuals. Social media make it much easier to broadcast information to a broad group of individuals but this sharing of information is very different from the "grooming" of friendships which appears to be based on reciprocity in terms of building trust and mentalizing.

There is a tendency to believe that the Internet has revolutionized all forms of human communication, a belief which falls under the rubric of "internet-centrism" (See the article "Is Internet-Centrism a Religion") according to the social researcher Evgeny Morozov. Dunbar's research is an important reminder that core biological and psychological principles such as the anatomy of friendship in humans have evolved over hundreds of thousands of years and will not be fundamentally upstaged by technological improvements in communication. Friendship and its traditional limits are here to stay.