The “reform narrative” that is crucial to understanding the self-conception of Germany’s political class today has several strands. It addressed the labour market by way of welfare rights (Hartz IV, coming to a blog near you soon). It addressed the labour market by way of a new politics of childcare (see the blogpost last week). It also addressed the key issue of public finance. A wide ranging debate within Germany going back to the late 1990s swirled around the issue of public debt. Reunification had led to heavy borrowing. But as Germans acknowledged, the tendency to run deficits clearly went far beyond that. 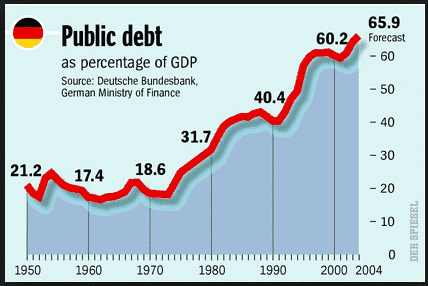 The short version of the story is that in response to a growing sense of alarm, German politicians rallied. Faced with the miserable track record of the last decades and the shock of the 2008 crisis, in 2009 they “did the right thing”. They applied the debt brake – a constitutional amendment requiring them to balance the books both at the national and local level. As a result Germany’s fiscal fortunes have since diverged radically from those of the rest of the industrialized world and the rest of the EU. The essential starting point of the Federal Republic’s agenda in the Eurozone crisis was to extend this new model of fiscal policy to the rest of Europe.