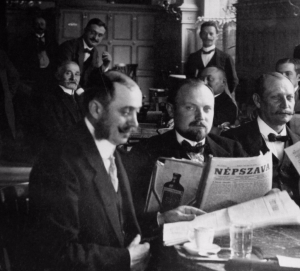 Centrál Kávéház, Budapest, c. 1910
I was sitting with my friend Robi at the Café Central in Budapest when the subject turned to religion and the Enlightenment, namely about the separation of God from moral systems. The topic was a poor choice. We had discussed it before in various forms and quickly came to a stalemate. There was an awkward silence. A young man sat down at the adjoining table and ordered an espresso in English.

Robi and I were speaking Hungarian. "Should we ask our new neighbor the Enlightenment question?" I asked. Robi nodded noncommittally as the neighbor picked up his smartphone. I laid out what could happen: one, the conversation could be short and awkward, two, it could be long and superficial, three, it could be long and not superficial. The likelihood of one or two was very high, I submitted. Robi nodded, unimpressed, and deepened the awkward silence.

"Excuse me. Do you mind if I ask whether you have any views on the Enlightenment?"

"We were discussing the Enlightenment's separation of moral systems from God," I explained. "Pluses and minuses," I added, trying not to poison the well.

"Good or bad, it had to happen," said our neighbor, with an accent now identifiable as Spanish. "It's evolution."

From there we moved to ideas about history, evolution and perpetual struggle versus socialism and the promise of an ultimate end to history, and about the replacement of God with ideology. After getting unfruitfully hung up on Nietzsche for a moment, we agreed that we were living in a post-ideological era.

"Capitalism is the new god," said the man, who by then had a bowl of pasta in front of him. Capitalism wants everything to flow; it abhors barriers, he continued.

We took issue. If capitalism is a god, how come no one is ever willing to sacrifice themselves for capitalism? Lots of people died for gods and ideologies, and both placed heavy demands for self-sacrifice.

"But people sacrifice themselves for capitalism all the time," he rebutted.

"But not explicitly," I protested. "Who ever said ‘Long live capitalism!' on a scaffold or before a firing squad?"

"Perhaps that's because we are implicated it in it. In capitalism, we are both the dictator and the oppressed."

"Like anorexia," I added, the disease of the 1980s that might have told us where we are if we could have read the signs. What is anorexia but an internalization of the two roles: dictator and oppressed? Or at the cellular level cancer…

The neighbor shook his head. He thought the illnesses of our time were rather nervous illnesses: ADHD, OCD, etc. Whereas once it was bacteria, solved with antibiotics, then it was viruses—which mirrored our fear of mixing and of outsiders as potential sources of infection. Now the viral age is in its last throes and our time is typified by nervous illnesses.

"But there is nothing unique about our time, then," I concluded, for the late nineteenth century was fixated on neurosis, hysteria, and neurasthenia, as well as runaway socio-economic inequality.

"Speak of the devil," Robi said, nodding towards a large black-and-white photograph on the wall. It showed three elaborately whiskered men sitting around a table at the Café Central reading newspapers. Our neighbor leaned closer to read the plaque below: 1910. "Well, not late-nineteenth century," Robi mumbled, "But close." We stared at the photo. Three of us; three of them. The one in the middle stared back at us. Our anxieties met for a moment.

"I think you're right," I said, throwing the conversation into reverse to bring us up to a different present. "We are our own oppressors." The Manichean struggle between the forces of good and evil that used to take place outside the individual, has moved inside with the Enlightenment.

"With Augustine," Robi corrected; ours is a monastic time.

Thence the spirit of self-sacrifice of our time. We took turns stacking examples: ISIS, extreme altruism, suicide by terror, martyrdom; to bring ourselves and others down or into the world again, by violence or by kindness—real contact.

"So radical as to be unthinkable," I agreed. And meaningless if undertaken alone, Robi added.

"But we are so isolated we can do nothing," said the neighbor. On social media there is an event and myriad possible interpretations of that event, myriad paths into it and out of it are contemplated and discussed in hours or days. A week, two weeks later: nothing. And when we seek a way of interpreting, one that gives us a path to action, we are quickly lost in the center of seemingly endless paths into the wilderness of alternative futures.

"We can't stop, but we are frozen." Maybe he didn't say that. Maybe we just heard it. He did say this: "Nietzsche said the next thing we worship would be health." Since we have no god and no ideology, nothing beyond ourselves to live for, all we can do is extend our own lives. (The reorientation of cities around health, the attempt to move out of the body: the singularity, Genecoin…)

"But the singularity is the greatest threat to capitalism," I venture. I'm on thin ice. The neighbor feels it.

"Because capitalism needs to turn over, constantly. It needs consultancy, it needs new blood, it needs to purge the stoppers and the slowers. If we live forever, we are a threat to capitalism. We become a living memory of paths not taken, of alternatives."

The waiter has brought him the bill.

"The problem with our time is that we are unmoored from history," he said. "You can't go back and understand. The world has already moved on." We haven't even processed the modern yet and we're already leaving the post-modern and entering the post-post-modern.

Robi mentioned an idea we had discussed the night before for a magazine where people write about things that are, by the standards of the time, old news, but as yet unprocessed and therefore unfinished.

"Like the idea behind Le Monde Diplomatique?" the neighbor hypothesized. Robi and I laughed. No no no. Not last week's news. More like the Cold War, the crisis of liberalism, the Russian Revolution, the Protestant Reformation.

He liked that. "We can go back to the modern and try to figure it out." I thought of Walter Benjamin's angel of history; he faces a growing pile of rubble and ruin of the past. He wants to stop and repair what has been destroyed, but is blown forward by the storm of progress that catches his wings and drives him backwards into the future.

The neighbor introduced himself. He's an architect.

I imagined him bending over a pile of rubble, one foot in the nineteenth century, one in the twenty-first, and rebuilding what has been smashed.

The stalemated conversation with Robi had begun when I wondered aloud: "What if gods—objects of adoration and purveyors of salvation—are for children, and moral systems are for adults?" (Robi had dismissed my hypothesis as arrogant Enlightenment-speak.) Now I had to laugh at myself for conjuring an architect-savior to replace God, morality, and ideology.

We shook hands at the door.