Lingulodinium polyedrum is a unicellular marine organism which belongs to the dinoflagellate group of algae. Its genome is among the largest found in any species on this planet, estimated to contain around 165 billion DNA base pairs – roughly fifty times larger than the size of the human genome. Encased in magnificent polyhedral shells, these bioluminescent algae became important organisms to study biological rhythms. Each Lingulodinium polyedrum cell contains not one but at least two internal clocks which keep track of time by oscillating at a frequency of approximately 24 hours. Algae maintained in continuous light for weeks continue to emit a bluish-green glow at what they perceive as night-time and swim up to the water surface during day-time hours – despite the absence of any external time cues. When I began studying how nutrients affect the circadian rhythms of these algae as a student at the University of Munich, I marveled at the intricacy and beauty of these complex time-keeping mechanisms that had evolved over hundreds of millions of years. 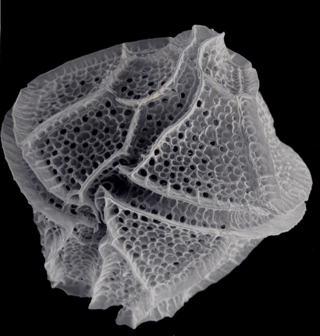 Over the course of a quarter of a century, I have worked in a variety of biological fields, from these initial experiments in marine algae to how stem cells help build human blood vessels and how mitochondria in a cell fragment and reconnect as cells divide. Each project required its own set of research methods and techniques, each project came with its own failures and successes. But with each project, my sense of awe for the beauty of nature has grown. Evolution has bestowed this planet with such an amazing diversity of life-forms and biological mechanisms, allowing organisms to cope with the unique challenges that they face in their respective habitats. But it is only recently that I have become aware of the fact that my sense of biological beauty was a post hoc phenomenon: Beauty was what I perceived after reviewing the experimental findings; I was not guided by a quest for beauty while designing experiments. In fact, I would have been worried that such an approach might bias the design and interpretation of experiments. Might a desire for seeing Beauty in cell biology lead one to consciously or subconsciously discard results that might seem too messy?

I was prompted to revisit the role of Beauty in biology while reading a masterpiece of scientific writing, “Dreams of a Final Theory” by the Nobel laureate Steven Weinberg in which he describes how the search for Beauty has guided him and many fellow theoretical physicists to search for an ultimate theory of the fundamental forces of nature. Weinberg explains that it is quite difficult to precisely define what constitutes Beauty in physics but a physicist would nevertheless recognize it when she sees it.

One such key characteristic of a beautiful scientific theory is the simplicity of the underlying concepts. According to Weinberg, Einstein's theory of gravitation is described in fourteen equations whereas Newton's theory can be expressed in three. Despite the appearance of greater complexity in Einstein's theory, Weinberg finds it more beautiful than Newton's theory because the Einsteinian approach rests on one elegant central principle – the equivalence of gravitation and inertia. Weinberg's second characteristic for beautiful scientific theories is their inevitability. Every major aspect of the theory seems so perfect that it cannot be tweaked or improved on. Any attempt to significantly modify Einstein's theory of general relativity would lead to undermining its fundamental concepts, just like any attempts to move around parts of Raphael's Holy Family would weaken the whole painting.

Can similar principles be applied to biology? I realized that when I give examples of beauty in biology, I focus on the complexity and diversity of life, not its simplicity or inevitability. Perhaps this is due to the fact that Weinberg was describing the search of fundamental laws of physics, laws which would explain the basis of all matter and energy – our universe. As cell biologists, we work several orders of magnitude removed from these fundamental laws. Our building blocks are organic molecules such as proteins and sugars. We find little evidence of inevitability in the molecular pathways we study – cells have an extraordinary ability to adapt. Mutations in genes or derangement in molecular signaling can often be compensated by alternate cellular pathways.

This also points to a fundamental difference in our approaches to the world. Physicists searching for the fundamental laws of nature balance the development of fundamental theories whereas biology in its current form has primarily become an experimental discipline. The latest technological developments in DNA and RNA sequencing, genome editing, optogenetics and high resolution imaging are allowing us to amass unimaginable quantities of experimental data. In fact, the development of technologies often drives the design of experiments. The availability of a genetically engineered mouse model that allows us to track the fate of individual cells that express fluorescent proteins, for example, will give rise to numerous experiments to study cell fate in various disease models and organs. Much of the current biomedical research funding focuses on studying organisms that provide technical convenience such as genetically engineered mice or fulfill a societal goal such as curing human disease.

Uncovering fundamental concepts in biology requires comparative studies across biology and substantial investments in research involving a plethora of other species. In 1990, the National Institutes of Health (NIH – the primary government funding source for biomedical research in the United States) designated a handful of species as model organisms to study human disease, including mice, rats, zebrafish and fruit flies. A recent analysis of the species studied in scientific publications showed that in 1960, roughly half the papers studied what would subsequently be classified as model organisms whereas the other half of papers studied additional species. By 2010, over 80% of the scientific papers were now being published on model organisms and only 20% were devoted to other species, thus marking a significant dwindling of broader research goals in biology. More importantly, even among the model organisms, there has been a clear culling of research priorities with a disproportionately large growth in funding and publications for studies using mice. Thousands of scientific papers are published every month on the cell signaling pathways and molecular biology in mouse and human cells whereas only a minuscule fraction of research resources are devoted to studying signaling pathways in algae.

The question of whether or not biologists should be guided by conceptual Beauty leads us to the even more pressing question of whether we need to broaden biological research. If we want to mirror the dizzying success of fundamental physics during the past century and similarly advance fundamental biology, then we need substantially step-up investments in fundamental biological research that is not constrained by medical goals.