“Let others praise ancient times. I am glad that I was born in these.”

When I struggle with scientist's block, I play 1980s music with the hope that the music will inspire me. This blast from the past often works for me. After listening to the songs, I can sometimes perceive patterns between our various pieces of cell biology and molecular biology data that had previously eluded me and design new biological experiments. But I have to admit that I have never performed the proper music control studies. Before attributing inspirational power to songs such as “99 Luftballons“, “Bruttosozialprodukt” or “Billie Jean“, I ought to spend equal time listening to music from other decades and then compare the impact of these listening sessions. I have always assumed that there is nothing intrinsically superior or inspirational about these songs, they simply evoke memories of my childhood. Eating comfort foods or seeing images of Munich and Lagos that remind me of my childhood also seem to work their muse magic. 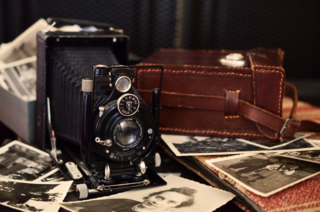 My personal interpretation has been that indulging nostalgia somehow liberates us from everyday issues and worries – some trivial, some more burdensome – which in turn allows us to approach our world with a fresh, creative perspective. It is difficult to make such general sweeping statements based on my own anecdotal experiences and I have always felt a bit of apprehension about discussing this with others. My nostalgia makes me feel like an old fogey who is stuck in an ossified past. Nostalgia does not have a good reputation. The German expression “Früher war alles besser!” (Back then, everything used to be better!) is used in contemporary culture to mock those who always speak of the romanticized past with whimsical fondness. In fact, the expression nostalgia was coined in 1688 by the Swiss medical student Johannes Hofer. In his dissertation “Dissertatio Medica de Nostalgia oder Heimweh“, Hofer used nostalgia as an equivalent of the German word Heimweh (“home-ache”), combining the Greek words nostos(homecoming) and algos (ache or pain), to describe a medical illness characterized by a “melancholy that originates from the desire to return to one's homeland“. This view of nostalgia as an illness did not change much during the subsequent centuries where it was viewed as a neurological or psychiatric disorder.

This view has been challenged by the University of Southampton researchers Constantine Sedikides and Tim Wildschut, who have spent the past decade studying the benefits of nostalgia. Not only do they disavow its disease status, they have conducted numerous studies which suggest that nostalgia can make us more creative, open-minded and charitable. The definition of nostalgia used by Sedikides and Wildschut as a “sentimental longing for one's past” is based on the contemporary usage by laypersons across many cultures. This time-based definition of nostalgia also represents a departure from its original geographical or cultural coinage by Hofer who viewed it as a longing for the homeland and not one's personal past.

In one of their most recent experiments, Sedikides and Wildschut investigate nostalgia as a “mnemonic muse“. The researchers first evoked nostalgic memories in participants with the following prompt:

Importantly, each experiment also involved a control group of participants who were given a very different prompt:

This allowed the researchers to compare whether specifically activating nostalgia had a distinct effect from merely activating a general memory.

After these interventions, participants in the nostalgia group and in the control group were asked to write a short story involving a princess, a cat and a race car. In an additional experiment, participants finished a story starting with the sentence: “One cold winter evening, a man and a woman were alarmed by a sound coming from a nearby house“. After 30 minutes, of writing, the stories were collected and scored for the level of creativity by independent evaluators who had no knowledge of the experimental design or group that the participants belonged to. Participants who had experienced more nostalgia wrote more creative prose!

This is just one example of the dozens of studies conducted by Sedikides and Wildschut which show the benefits of nostalgia, such as providing inspiration, increasing trust towards outsiders and enhancing the willingness to donate to charities. What is the underlying mechanism for these benefits? Sedikides and Wildschut believe that our nostalgic memories provide a sense of belonging and support, which in turn helps our self-confidence and self-esteem. The comfort of our past gives us strength for our future.

Does this mean that this longing for the past is always a good thing? Not every form of nostalgia centers on personal childhood memories. For example, there is a form of ideological nostalgia expressed by groups who feel disenfranchised by the recent progress and long for days of former power and privilege. The South African sociologists van der Waal and Robbins recently described the popularity of a song about the Anglo-Boer waramong white Afrikaans-speakers in the post-Apartheid era which may have been rooted in a nostalgic affirmation of white Afrikaner identity. It is conceivable that similar forms of ideological nostalgia could be found in other cultures and states where privileged classes and races are losing ground to increased empowerment of the general population.

It is important that we distinguish between these two forms of nostalgia – personal childhood nostalgia and ideological group nostalgia – before “rehabilitating” nostalgia's reputation. The research by Sedikides and Wildschut clearly demonstrates that nostalgia can be a powerful tool to inspire us but we have to ensure that it is not misused as am ideological or political tool to manipulate us.