Last week, I finally got to meet one of my heroes, Kip Thorne. I was a real cosmology geek when I was young have been a fan of his since early junior high school. So when my astronomer offered to introduce me during a Caltech event to celebrate the Ligo discovery, I jumped at the chance! And not only did I get to meet Kip Thorne, but really enjoyed the event as well.

Listening to the Ligo scientists playing talk about their role in this forty year idea, I couldn't decide what was more amazing, that they had had detected these waves that so perfectly corresponded to Einstein's magnificent 100 year equations or that the NSF had stayed with the program for such a long time to see it through!

Really, what a project–not just in terms of long-term investment but to have over a thousand scientists working for decades on something that had such a nominal chance of success –or to put a different way, they simply had no idea it was possible until they actually had done it! That is something, isn't it?

Caltech had a very exciting few weeks; for later that same week, we got to attend a Science and Society Conference and dinner honoring the GREAT Ahmed Zewail (who is not just a great scientist but is a pretty inspiring human being!)

The conference itself was an entire day of interesting talks–with the common thread (other than everyone's great affection for Zewail) being about how crucial general research is to real discovery.

We are losing this as more and more research becomes application-driven and short term results bound.

As one of the speakers reminded us, when Einstein was making his original equations, he was not trying to do anything per se but was just following his passions. He was curiosity-driven and it was this free ranging and passionate pursuit of truth that made him one of the greatest minds of the twentieth century.

Both Dr. David Baltimore and Dr. Roger Kornberg spoke about how–like with Einstein–in medicine too, the most crucial discoveries were done by younger scientists not looking toward applications but rather simply following where their curiosity led them. Young scientists have much less chance for receiving grants (with a disproportionate number of successful proposals going to older scientists). And are young scientists encouraged or as capable of going after knowledge for knowledge's sake anymore? Are they curious for curiosity's sake? Because I think this is a kind of bottom line– thinking and being in terms of ends (not relentlessly looking at everything in terms of means to ends and applications).

Like a kiss, what Einstein called “holy curiosity” is always an end in itself, right?

I am an admirer of Han Bing's Walking the Cabbage Movement–and was interested to hear that the movement was making its way to my favorite place on earth, Kashmir.

Have you heard of the movement?

You can watch the video below… an artist, he doesn't want to over explain why he walks cabbages.

Why do we do what what we do?

Why is okay to spend all day in a fancy car but not okay to walk a cabbage?

People, he says, have a rock in their head when they cling stubbornly to the things they do–as if mundane and practical flourishing is the only possibility open to a human being.

You might be aware from Walter Benjamin that around 1840 in the glorious city of Paris, it was briefly fashionable to take turtles for a walk in the arcades. These turtle walkers were the celebrated flâneurs and not only did they walk their turtles like Han walks his cabbages but the Paris flâneurs liked to have the turtles set the pace for them!

And we mustn't forget the poet Gérard de Nerval who had a penchant for lobsters– or at least for one lobster:

Nerval was seen one day taking his pet lobster for a walk in the gardens of the Palais-Royal in Paris. He conducted his crustacean about at the end of a long blue ribbon. As word of this feat of eccentricity spread, Nerval was challenged to explain himself. “And what,” he said, “could be quite so ridiculous as making a dog, a cat, a gazelle, a lion or any other beast follow one about. I have affection for lobsters. They are tranquil, serious and they know the secrets of the sea.” 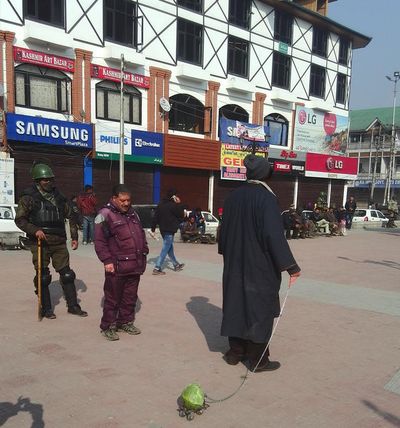 Han is so right! We should all pursue some kind of flânerie…

“You can walk radishes, watermelons or nothing… I am playing a game.. ”

In Kashmir, however, this is not fun and games by any means; for in a place military occupation something like that can get you killed.

My own love of Kashmir is as old as my love of Kip Thorne. For me, it was a kind of paradise on earth, and as I read the article about the Kashmiri cabbage walker, I was deeply moved and have not been able to get it out of my mind since.

The Kashmiri Cabbage Walker, who, for his own security, declines to show his face in photographs or reveal his name, age, occupation or other details that may hint at his identity, has lived under the rule of Indian armed forces throughout his life. The performance with the cabbage on the leash is meant to ridicule the state of things. “By incorporating an absurd act into the realm of the Kashmiri quotidian, and subsequently normalizing that act,” he says, “I am trying to expose something that is far more absurd to the point of perversion.”

The Kashmiri cabbage walker says that he and Han Bing are friends. And despite the deadly seriousness of the situation, the sense of “play” (roaming 漫游 and dream journeying 臥遊–of Alice in Wonderland 愛麗絲夢遊仙境) is very present in what he does, I think. For me, it is like my favorite movie, Life is Beautiful… for the cabbage walker, it is a hugely moving protest of the absurdity of violence but it is also a stand that on some very deep level affirms that, yes, maybe (?) life is beautiful.

In any event, I used to think beauty could save. Now, in my advanced old age, I think it is laughter and play that has the power to truly save us. So in my opinion, not only is curiosity and a sense of play crucial to science ~~~~but it is required for life itself. I have heard people in academic environments remark about how humorless students have become–especially referring to North Americans, they mention how seriously these kids take themselves or how they never really laugh. I have heard older academics remark that the younger generation seems less interested in knowledge for knowledge's sake and how they lack any serious curiosity. Make no doubt about it–that will adversely affect cutting edge science (which requires general research for real discoveries) but not just that. Charles Taylor in his book A Secular Age talks at length about festivals and play–evoking Schiller, he sees it as a way to mediate between the finite and the infinite (or in his terms between the immanent and the transcendent). As we lose shared narratives that involve the transcendent in the secular age, we are “normalized” (as Foucault wrote); and the more mundane and practical flourishing comes to dominate the less playful I suppose we become. That is my theory anyway.

Almost three years ago, I wrote about play here in these pages. And I invoked Heidegger, who said,

Heidegger felt that it was only through play that human beings could be “released” (gelassenheit) from their relentless will to impose their subjective categories on things and to legislate the way things must be– for he lamented that the entire history of Western metaphysics was a history of rational prescriptions about what Being must be. In this way, I imagine that Heidegger would not have been at all surprised to hear me complain that “play has disappeared.”

Of course, there is no room for “play” in our world now, because nowadays everything must somehow become under our human control– in Heideggerean terms, everything has become a resource to be used, even our own lives. Every moment must be used efficiently and replacing play we now have amusements which are in many ways aspects of “work” (since amusements are taken up with consumption and are themslves means not ends). The great Dutch scholar Huizinga, who wrote the most charming essay on the play-function of all time, also positioned archaic play in contrast to the modern condition of prosaic efficiency, utilitarianism and “the hell of the literal.”

In this way “God is dead” is also to suggest that play is dead– in our age of efficiency, consumption and earnestness.

As for myself, for years, I have been making plans to become a turtle walker (tortoises to be specific, which my mom has in her backyard)…. cabbages, however, seems a lot easier…. Tortoises can be so recalcitrant and not nearly as sweet as a cabbage, which not only look so cute but are delicious too!

This one is for Tasneem. Tasneem Zehra Husain's Only the Longest Thread is the most delightful and beautifully written science book. Somehow, she captures the magic of scientific discoveries. It is highly recommended!

Walking a Cabbage in Kashmir

Walter Benjamin of the Paris Flaneurs: 1938

Nerval: A Man and his Lobster