It just so happened that when the discovery of gravitational waves sent ripples through the world, Valentine's Day was right around the corner. News stories about this victorious verification of ‘Einstein's last remaining prediction' were as ubiquitous as the pink and red cards, making grandiose claims – or extravagant promises – about an undying love. It was an interesting juxtaposition. 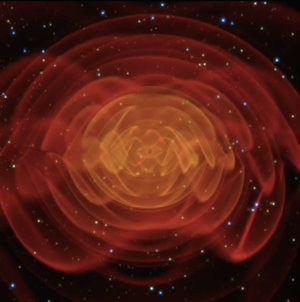 With gravitational waves very much on my mind, I was wandering the aisles of a local store, when suddenly I came across a display full of cards dripping saccharine sweetness, and a stray thought wandering into my head almost made me laugh out loud. These cards would be completely appropriate, I thought, if sent from one black hole to another! After all, it would not be out of place for a couple of black holes, spiraling into each other, to exchange ardent promises that they will merge and become one; they would be entirely justified in claiming that the story of their love will reverberate across galaxies and through millennia, and that people far away will delight in discovering their tale. As LIGO proved last month, all these claims are true!

As you have doubtless read many times by now, gravitational waves are ripples in spacetime, caused by accelerating masses. What does that mean? Using the cliched, but still useful, metaphor of spacetime as a rubber sheet, a heuristic description of general relativity is as follows: mass deforms spacetime, much as a heavy ball would a rubber sheet – the heavier the mass, the deeper the ‘dip'. Other, smaller, objects in the vicinity (assuming they are far less massive and the dips they cause are not appreciable in comparison) are then obligated to modify their paths as they approach this mass. So as to avoid falling into the valley created by the larger object, they steer around it, and in effect, end up tracing an arc. This mechanism explains the planetary orbits, as well as all other phenomena encompassed by Newton's theory of gravitation – and it goes much further.

One key difference between Einstein's theory and Newton's, is that of philosophy. Where Newton viewed gravity as a mysterious force of attraction, wielded at a distance, Einstein revealed it to be a natural consequence of the shape of spacetime. This has ramifications. For instance, with our post-Einstein understanding of gravity, we would conclude that if a massive object were to move, the spacetime deformation it causes would propagate as well. In particular, if the mass accelerates, it causes a rhythmic disturbance that ripples outward; which is another way of saying that gravitational waves are predicted by general relativity.

Analogies have been drawn with electromagnetic waves, (visible light and its cousins) which can, in similar manner, be generated by accelerating electric charges, but one must be mindful of the crucial distinction: electromagnetic waves ripple across spacetime, whereas gravitational waves are ripples in spacetime itself.

That is a subtle statement, and one that exemplifies the problem with representing abstract mathematical concepts: all metaphors are necessarily incomplete! However, it is an important – and interesting – enough point, to merit some slight explanation. So, with the caveat that the following serves only as a rough, intuitive, illustration of the nature of the difference between electromagnetic and gravitational waves, picture a large square tank of perfectly still water, with two small buoys floating, a significant distance apart.

As long as the water is undisturbed, the buoys remains stationary. But, say you place a ball in between the two buoys and move it around, so that waves are set up. As the ripples move out toward them, the buoys begin to bob up and down, their motion attesting to the presence of waves.

Now consider what happens if the same arrangement is replicated, with the water removed, and the tank now empty, except for two particles floating freely. Imagine compressing and expanding the tank, squeezing first one set of parallel walls together, and then the other, so that the square is deformed into a horizontal and vertical rectangle, by turn. The distance between the two floating particles will change in tune with this motion, causing the particles to oscillate, in much the same way as the buoys did in the water tank.

That explains something of what they are, but why is it that gravitational waves, which appeared in the equations of general relativity a century ago, took this long to track down? The answer lies in fact that gravity is much weaker than the other forces. It takes a very heavy object to leave an appreciable mark on spacetime. On the one hand, that is wonderful, otherwise we would constantly be picking ourselves out of little indentations in the ground created in response to our mass, but on the flip side of the coin, this means that in order for a gravitational wave to be detected, even by the super sensitive apparatus that lies in wait today, it must have originated from a source where the gravitational field is very strong, and changes fast – which, as it turns out, is a pretty good description of coalescing black holes.

Black holes that orbit each other, gradually begin to spiral together. Being some of the heaviest objects in the universe, they deform the surrounding spacetime greatly, and – as a result – their motion is impacted significantly. They fall in faster and faster, their orbital speed approaching the speed of light, until eventually the two merge to form a large spinning black hole – a nebulous object which shakes and vibrates, discarding some of its mass and emitting gravitational waves, until eventually it settles down into a calm equilibrium as a single, much heavier, black hole. This process, known as a ringdown, reminds me of a large chunk of clay on a potter's wheel – the act of spinning bringing shape to an amorphous mass …

The gravitational waves detected by LIGO originated 1.3 billion light years away, as two black holes, 29 and 36 times the mass of our Sun, fused together to form a single black hole. The energy equivalent of 3 solar masses was lost in the process. This almost unfathomably violent collision caused a distance of several hundred kilometers to shrink (and then expand) by less than the millionth the size of an atom. It is a triumph of experimental design, accuracy and ingenuity, that such a minuscule effect was recorded.

While talking about the discovery, several scientists pointed out that their real joy was not in finally detecting gravitational waves, but in the way we were able to do so. The success of the net is more worthy of celebration than the catch. It is not a trivial achievement to be sure, but even though we had never before observed them directly, the indirect evidence for gravitational waves was strong enough to merit the Nobel Prize in Physics in 1993.

What is new and truly exciting is that we have been able to design a technology that will probe space in an entirely novel way to what we have ever done before. So far, we explored the universe by shining light on it and recording what we saw, but this method has its limits; the early universe, for instance, might as well have black-out blinds! It is impenetrable to light.

Gravitational wave astronomy is to conventional astronomy what sound is to sight. We have developed our hearing to the point where we are able to hear echoes of events we are banned from ever viewing. What we have now is a completely different way of navigating space, and it will doubtless lead us to uncover information we would otherwise have missed.

The love song of those two black holes continues to echo through the universe, but more important than the specifics of their story, is the hope it evokes, and the silent promises it makes about the wonders that are yet to come.

In the last verse of the Divine Comedy, when Dante speaks of his vision, he finds it is fading fast:

Just as the dreamer, after he awakens,

still stirred by feelings that the dream evoked,

cannot bring the rest of it to mind,

such am I, my vision almost faded from my mind,

while in my heart there still endures

the sweetness that was born of it.

All he is left with is a vague sense of having glimpsed l'amor che move il sole e l'altre stelle – a love that moves the Sun, and the other stars. As I read that line now, I can't help wondering if, in the cosmic dream he did not remember, Dante witnessed two black holes merging.