Nearly half a million applications for asylum submitted by refugees were processed by German authorities in 2015, according to the German Federal Office for Refugees and Migration. The number of people who were officially registered in Germany as potential asylum seekers was even far higher-roughly one million in 2015 – which suggests that Germany anticipates an even higher number of official asylum applications for 2016. Chancellor Angela Merkel has defied many critics even in her own party and cabinet by emphasizing that Germany can and will take on more refugees, most of whom are coming from war-torn countries such as Syria, Iraq and Afghanistan. “We can do it!” (“Wir schaffen das!”) was the phrase she used in September of 2015 to convey her optimism and determination in the face of ever-growing numbers of refugees and the gradual rise of support for far right extremist demonstrations and violent attacks by far right extremists on refugees centers in Germany. 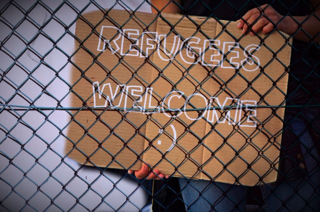 The German media and right wing populists are currently obsessing about statistics such as the fact that the far right and libertarian party AfD (Alternative für Deutschland – Alternative for Germany) will garner 10% of the popular vote or that the vast majority of the refugees are male and could lead to a demographic gender shift if they remain in Germany. While such statistics serve as an important barometer of the political climate in the German electorate or to prepare for the challenges faced by the refugees and German society in the next years, they do not address the fundamental philosophical questions raised by this refugee crisis. In the latest issue of the popular German philosophy periodical “Philosophie Magazin“, the editors asked philosophers and other academic scholars to weigh in on some of the key issues and challenges in the face of this crisis.

Should we be motivated by a sense of global responsibility when we are confronted with the terrible suffering experienced by refugees whose homes have been destroyed? The sociologist Hartmut Rosa at the University of Jena responds to this question by suggesting that we should focus on Verbundenheit (“connectedness”) instead of Verantwortung (“responsibility”). Demanding that those of us who lead privileged lives of safety and reasonable material comfort should feel individually responsible for the suffering of others can lead to a sense of moral exhaustion. Are we responsible for the suffering of millions of people in Syria and East Africa? Are we responsible for the extinction of species as a consequence of climate change? Instead of atomizing – and thus perhaps even rendering irrelevant – the abstract concept of individual responsibility, we should become aware of how we are all connected.

We are connected with the children of Syria and Somalia by virtue of the fact that they are fellow humans who deserve to live, learn and love. We are connected to the species facing extinction by climate change because we share the ecosystems of this planet and our species may also face extinction. For Rosa, the sense of connectedness is what motivates us to help the refugees without trying to precisely determine our relative global responsibility.

Are rational thoughts or emotions a better guide for how to respond to the refugee crisis? The philosopher Volker Gerhardt from the Humboldt University of Berlin emphasizes the importance of balancing rational and emotional responses. Rationally calculating the economic cost of taking on refugees and the benefit of increasing the younger workforce once the refugees are granted permission to settle and work in Germany does not do justice to the issues. Gerhardt is aware of his own background as the child of a refugee mother after World War II who were both cared for by their relatives. Every time he sees a photo of a refugee child, it evokes memories of his own past and serves as a motivation to help. But he is also aware of the limits of such emotional and rational willingness to help. Currently, hundreds of thousands of German citizens are volunteering to help and welcome the refugees by donating their time, money and other essentials but the German government needs to realize that this spirit of charity may become exhausted if the influx of refugees is not restricted. Hilde Landweer is a philosopher at the Free University of Berlin who studies the philosophy of emotions. She explains the underlying mechanisms which allow us to feel empathy for refugees. According to Landweer, there are three components which allow to feel empathy: 1) we have to feel a sense of similarity towards the other person, 2) we have to be able “experience” their situation and 3) we have to realize that one day, we might be able to also find ourselves in such a situation. Germany's leadership role in its willingness to help the refugees when compared to other developed countries – Britain is planning on taking in 5,000 Syrian refugees per year, the USA only 1,000 to 1,500 – may be rooted in the fact that Germans can identify with the plight of the Syrian refugees. Millions of Germans experienced expulsion and forced resettlement from their homelands after World War II when post-war Germany was carved up. Landweer believes that empathy can be nurtured by meeting refugees and hearing about their personal narratives. But empathy needs to be more than shared pain, it needs to also include looking forward to how one can restore security and joy. This positive vision is what ultimately motivates us to help.

Does Germany have a unique historic responsibility when responding to the refugee crisis? Aleida Assmann is a professor of literary and cultural studies at the University of Konstanz who studies collective memory and its impact on German culture. Assmann refers to the Erinnerungskultur – the culture of remembrance – in Germany. Contemporary Germans are aware of the fact that their ancestors either actively participated or passively ignored the mass murder of millions of Jews, Slavs, gypsies and other ethnicities. According to Assmann, this historic responsibility is sometime summarized as “Auschwitz should never occur again!” but she takes a broader view of this responsibility. The root of Auschwitz was the labeling of fellow humans as fremd – foreign, alien or “other” – which did not deserve respect, empathy and help. Our historic responsibility requires that we avoid the trap of viewing refugees as fremd and instead encounter them with a sense of fellowship. The inherited burden of the Nazi past becomes an opportunity for Germany to define its future: Do we want to become a society that closes its doors to fellow humans in despair or do we want to welcome them in order to build a future society characterized by caring and sharing.

These are just some of the responses given by the philosophers in the Philosophie Magazin issue but they filled me with hope. As a German living in the USA, I often fall into the trap of reading clickbait and sensationalist news articles about the refugee crisis such as the rise of crimes committed by both right wing extremists and refugees in Germany, the imagery of refugees “flooding” German cities and the political gossip about Merkel's future. But thinking more deeply about the core issues reminds us that what is at stake in Germany is our humanity. Yes, it will be challenging to integrate millions of refugees and provide them with a new Heimat – homeland – but our history and culture compels us to act in a humane fashion and not ignore the plight of fellow human beings.