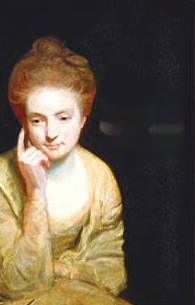 “If all Men are born free, how is it that all Women are born slaves?”

“She who Marrys ought to lay it down for an indisputable Maxim, that her Husband must govern absolutely and intirely, and that she has nothing else to do but to Please and Obey.”

– Mary Astell, Some Reflections Upon Marriage (1700)

Mary Astell, writer and philosopher of the late-17th and early-18th century, provides an intriguing paradox for the contemporary feminist. Modern scholars of her work have referred to her as the 'first English feminist'; yet, she was unabashedly conservative in ways that severely limited her ability to push boundaries for women.

Astell's fierce advocacy for women's education is perhaps her biggest claim to contemporary fame. 1694 saw the first publication of her book A Serious Proposal to the Ladies, in which she argued that women had the same intellectual and moral capacities as men, were equally deserving of education, and ought to emancipate themselves from the the vain and foolish social customs that bound them. To this end, Astell proposed the formation of a female-only educational academy.

Such views on women's education were remarkably radical for Astell's time, and her claims that women could be just as rational and virtuous as men went against popular sentiment. Her position on these matters will resonate strongly with the modern-day feminist. Consequently, the following excerpt from her later 1700 book, Some Reflections Upon Marriage, will come as a surprise—and perhaps disappointment—to some:

“She who Marrys ought to lay it down for an indisputable Maxim, that her Husband must govern absolutely and intirely, and that she has nothing else to do but to Please and Obey. She must not attempt to divide his Authority, or so much as dispute it, to struggle with her Yoke will only make it gall the more, but must believe him Wise and Good and in all respects the best, at least he must be so to her. She who can't do this is in no way fit to be a Wife.” (Reflections)

Despite what one might hope, the passage above isn't an isolated call by Astell for wives to submit to their husbands, no matter how lacking in wisdom or goodness he may be. Nor is it the case that Astell had changed her mind about the status of women by the time she started writing the Reflections; the Proposal itself is littered with calls for female subordination.

For instance, Astell was careful to qualify that her advocacy for women's education wasn't a call for them to usurp traditionally male seats of power in the Church. There were some duties that ought not to be wrested from men:

“We pretend not that Women shou'd teach in the Church, or usurp Authority where it is not allow'd them; permit us only to understand our own duty, and not be forc'd to take it upon trust from others.” (Proposal)

Many modern readers will find a puzzling tension between Astell's 'feminist-sounding' calls for women's education, and her 'anti-feminist', patriarchal and conservative claims that women were to remain subordinate to men, in both marriage and broader society. A full reading of Astell, however, will reveal that both her 'feminist' and 'anti-feminist' positions are were consistent, given the religious commitments that grounded her account.

Astell believed that God, having bestowed all human souls with equal capacities for intellect and virtue, had the Divine Will for all mankind to fully develop and exercise these capacities. The role of female education, then, was to allow women to carry out this divine duty. And crucially, the same Divine Will that supported female education for Astell simultaneously prescribed that women were rightfully subordinate to men. Tied together by religion, Astell's 'feminist' views in fact sit quite comfortably alongside her 'anti-feminist' views.

Does Astell deserve her claim to feminism? It's probably unfair to conclude, on the basis of her patriarchal views, that she doesn't (that is, if it's even wise to ask such a question of anyone in the first place). Reading Astell's works in light of the society she lived in reveals just how remarkable they were for their time. Back then, women were commonly seen as being naturally foolish, immoral and inferior in other ways to their male counterparts; Astell refuted these claims by arguing that any female deficiencies were the result of nurture, not nature. And given the grip of religion and the Church on society at the time, it would be unfair to require Astell to abandon her religiosity altogether in order for her to count as 'sufficiently feminist'. Instead, we can see Astell's project as an attempt to push boundaries for women to the extent that her religious commitments allowed her to.

Yet critically examining Astell's work with respect to her own goals reveals something interesting from a feminist point of view. Astell acknowledged a distinction between religiously ideal marriages between godly men and godly women, and non-ideal marriages between women and brutish men. Though wives were rightfully subordinate to their husbands, an ideal union would eliminate some of the oppression felt by women, since godly husbands would fulfil their divine duties by treating their wives as friends and equals. In contrast, women in non-ideal marriages (which were common) were to put up with it and obey their husbands; modern readers would find such quietism in response to domestic tyranny disturbing. Astell gave instructions to women on how to act in both kinds of marriages, and proposed an all-female educational retreat to help them, she gave no account of how men were supposed to improve themselves as husbands. This is strange since by her own admission, many men were in need of such instruction.

Astell's failure to fully address men, then, limited her account with respect to both her own religious goals, and the more contemporary feminist goal of improving women's lived experiences. The silver lining is perhaps the great value Astell placed on the education of children as well as women. One argument the Proposal made in favour of women's education was that it would allow mothers to become better educators of their offspring. Readers might speculate that this would in turn eventually produce a generation of more virtuous, intelligent and godly adults that might move society towards both religious and feminist ideals.

Astell's ideas in the Proposal and Reflections were miles ahead of their time, and undoubtedly have much to offer to contemporary feminist thought—whatever one may think of applying the label of 'feminist' to the conservative Astell. Her arguments against misogynist perceptions that women were naturally irrational and debased ring true today, even if they did not ring true to the society in which she lived. Astell's account, radical in the way it pushed boundaries for women to the extent that religion permitted, establishes her as a valuable and intriguing figure in the history of feminist thought and philosophy.