The rains visited on the 1st of December, 2015. This monsoon in Chennai, we had already experienced deluge and mayhem, mid-November. The city's low-lying areas had flooded, and thousands of people had to be evacuated.

When the rains made a dramatic appearance again on the 1st of December, I wasn't prepared for a repeat of the November events. One spate had already weakened the city, and it had tired me out. One only prepares for one natural disaster a year, though all evidence should have us scurrying otherwise. The waters seeped in through the walls of my ancient building, and I looked on, fervent in my belief that this too would pass. Neither the slowly forming pool in the dining room of my second floor walkup, nor the increasingly bleak weather reports prepared me for anything but a day's worth of indoor activity, and a night of sleeping to the sound of soothing, lashing rains. 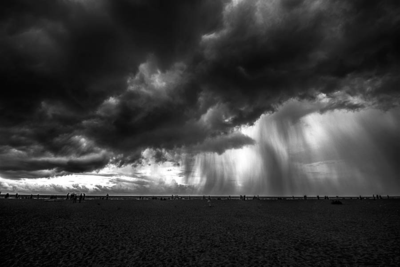 I have experienced the phenomenon known as a natural disaster a few times before; first as a child, and then as an almost adult. Other floods and earthquakes had produced in me a vague sense of preparation. As if this is but another event out of a series of life possibilities, and one is bound to emerge unscathed. When the lights went out that 1st of December, I retained this sense of possibility. Fumbling around with the help of a few forgotten birthday candles, I wolfed down some leftovers, and went to sleep in the darkness. Before going to bed, I gathered all the dust cloths, old towels, and washcloths in the house and lay them down like a patchy quilt next to the walls, hoping they'd absorb the waters. I slept in the living room, the daybed sticking up against the windows, hoping that I would hear the rains stop.

I woke up. The rains hadn't stopped. Groggy and now anxious, I paced, glancing at the now diminishing battery on my cellphone. A few tense phone calls to the electricity board later, I determined that things were officially now capable of being called a disaster. Electricity was not going to be restored for the next few days, I had been told. It's quite surprising how much modernity renders us incapable. For an hour or so, I flailed. The refrigerator had begun to stink. My cellphone would soon be dead. I wasn't sure if I would run out of cooking gas.

Then drawing on long forgotten memories of reading under my kerosene lamplight in socialist, mofussil India, I counted the candles, and determined that they weren't enough to tide me over. Making a quick drenched run to the store nearby, I gathered matches, and a few packets of biscuits. The shops were out of candles, and the line at the vegetable store snaked out the door and into the street. Back home, I counted the hours of the day, and divided them into tasks. Breakfast and lunch would have to be combined, and the day's cooking would have to be completed by three in the afternoon, lest I run the danger of kitchen accidents in the dark. The hours would have to pass in activity, for fear of anxiety. The few stories that I had read online before my cellphone gave way all hinted at catastrophe far worse than my peeling walls. The city was sinking even as I lay staring at my ceiling, worrying about whether the apples would last through the blackout.

And so I read. Hilary Mantel's “Wolf Hall”, that I had picked up and put away in the past, for lack of focused reading time; Barbara Kingsolver's “Homeland” that kept getting pushed lower and lower on my reading pile; Daniyal Mueenuddin's “In Other Rooms, Other Stories” that I re-read with so much revisited pleasure; and Vikram Seth's “Red Earth and Pouring Rain”, which I return to ever so often in need of comfort.

As I calmed down, and stopped hounding the electricity board offices, I settled into a partly monastic, partly post-apocalyptic routine. I divided up existing food, and meal plans became simpler and easier – an apple, dal, rice, and a spoon of sugar when in need of a treat. I read like I used to read when I was a child; relentlessly focused, and immersed. I read till the lights faded to last light, and then I read in candlelight.

When the candles ran out, I lit lamps. My mother and my aunt had left me many brass lamps during their various attempts of attempting to stoke sacrality in my home. So now, as if in obeisance, I washed them, poured oil into their cups, twirled long cottony tails, and laid them out like so many sentries guarding against darkness. I went to sleep by nine pm, having laid out my now damp patchwork in the dining room, ready to receive the skies in my home. Morning came, and it began all over again. The dishes needed to be done, food cooked, and books read.

The sun came out three days later. I ventured out to see that others while suffering the same isolation, had begun to help those affected much worse. My neighbors cooked food and sent them out, my friends had set up relief hubs, and strangers were wading in waist deep water rescuing people and animals. The city came together in catastrophe not waiting for the powers to show up. After those hours of sequestration, this seemed like a world to which one must return.

The lights came back on a day later. Now we wait as relief efforts give way to rehabilitation and people attempt to return to normal life. To everyone far and wide that wrote to me asking if I was alright, I said I had been lucky and things across the city were terrible. And this is the truth; as I waited alone, people lost homes, cars, savings, certificates, and loved ones. It is difficult to comprehend the scale of this disaster even as one is in the heart of it. The city works in various modalities, as do disasters.

The thing I will remember most of this catastrophe is the challenge of being in it, and of being fully present. That this is happening is not difficult to comprehend. What is difficult and near impossible to remember is that the bell tolls for thee. I staved it, with books, and apples, and dish cloths. I scurried, and ignored the rains. I thought about dream worlds, other spaces, and other times. I subsumed catastrophe into the fantasy of a science fiction landscape. And then I returned to the world.