There’s a particularly good episode of Doctor Who (“The Shakespeare Code”) wherein the Doctor and Martha visit Shakespeare and save the world from a conspiracy of witches. The witches’ plan is to take possession of Shakespeare and force him to write magical incantations into the (now lost) play Love’s Labours Won. (It’s not really magic, of course, but some quantum dynamical dimension of psychic energy… well, whatever.) When the play is then performed in the Globe Theater and the psychic words are spoken, a transgalactic portal will open up, through which an entire population of witches – really, in fact, members of an alien species known as the Carrionites – will march through and take over the world. Luckily, the Doctor is wise to the plans, and he and Martha improvise a counter-spell on the spot and disaster is thereby averted.

It’s crucial to the plot that the witchy words be spoken in the Globe, because the witches had previously forced its architect to frame the theater according to magical dimensions: fourteen symmetrical walls into which some sort of string-theoretic alchemical pentagram might be interpolated, or something like that. The point is, the layout of the place is critical for the magic to do its work.

I have recently been reading Frances Yates’ classic work of history, The Art of Memory (1966), which suggests that this latter point may not be so far fetched. Yates was a formidable scholar of the European renaissance, and her rich book details a strain of magical thinking about how the art of memory can bring a soul into harmony with the deep nature of things.

The art of memory goes way back. Ancient authors like Simonides, Quintilian, and Cicero recommend using vivid images to help recall anything from lists of names to long passages from speeches. Images drawn from mythology, or the zodiac, or well-known public monuments like the Parthenon might all be employed creatively as mnemonic devices.

You know the sort of trick: if you’re trying to remember the books of the Bible, imagine a pair of jeans (Genesis), hanging from the doorknob of an exit (Exodus), where there’s a panda bear levitating (Leviticus), etc. Of course, the ancient memory devices were all much more decorous and ambitious than this. The ancient wizard of memory Metrodorus divided the belt of the zodiac into 360 degrees with memorable images, which he re-purposed for memorizing all manner of things.

Fast forward to the Renaissance, when the mnemonic pictures themselves took on far greater significance as talismanic images. According to a loose tradition that includes such stars as Marcilio Ficino and Giordano Bruno, ornamenting one’s memory with astrological and mythological imagery meant refurnishing one’s soul in such a way as to mirror the mystical architecture of the world. In this line of thought, the fanciful emblems people use to remember stuff should be not just arbitrary images, but mystical archetypes that draw out the astral forces that bring structure to both the individual soul and to the world.

Giulio Camillo (1480-1544), for example, took a theater design from the ancient Roman architect Vitruvius and refashioned it into a virtual memory theater, replete with mythological imagery. The operator stands on stage, looking out upon the theater, like Professor Xavier in the Cerebro, and surveys the world’s deep structure. Yates’ description conveys the idea:

Camillo’s Theatre represents the universe expanding from First Causes through the stages of creation. First is the appearance of the simple elements from the waters on the Banquet grade; then the mixture of the elements in the Cave; then the creation of man’s mens [mind] in the image of God on the grade of the Gorgon Sisters; then the union of man’s soul and body on the grade of the Pasiphe and the Bull;….

And if we go up the Theatre, by the gangways of the seven planets, the whole creation falls into order as the development of the seven fundamental measures….

The whole theater is apparently laid out like a periodic table of the archetypal universe. Camillo confusedly tried to explain the idea behind the memory theater to a skeptical Viglius Zuichemus, who in turn related what he could to his even more skeptical friend, Erasmus of Rotterdam. “He calls this theatre of his by many names, saying now that it is a built or constructed mind or soul, and now that it is a windowed one. He pretends that all things that the human mind can conceive and which we cannot see with the corporeal eye, after being collected together by diligent meditation may be expressed by certain corporeal signs in such a way that the beholder may at once perceive with his eyes everything that is otherwise hidden in the depths of the human mind. And it is because of this corporeal looking that he calls it a theatre.” 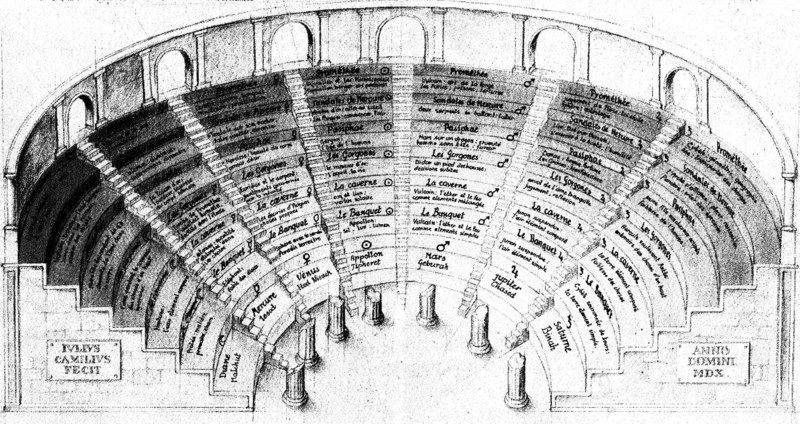 Camillo’s theater was actually built for the king of France sometime in the late 16th century, though it disappeared not long after that. (That’s memory for you.) But anyway, the overall point of Camillo’s theater was to present a structure that, when viewed, renders one’s own mind a microcosm of God’s macrocosm.

Speaking of microcosm and macrocosm, we come now to the English physician and occultist Robert Fludd (1574-1637), a like-minded brother in these mystical arts, who followed up on Camillo’s memory theater with one of his own. In his Metaphysical, Physical, and Technical History of the Two Worlds, the Greater and the Lesser (c.1617), Fludd describes a theater that can be used to model the secret structure of the cosmos. But Fludd is careful to stress that the model will work best as an aid to memory if it is based on an actual, physical being, a real one that the reader can actually visit and subsequently remember without difficulty. And now what theater would that be? That’s right: Yates argues that the theater Fludd goes on to describe is in all likelihood the Globe. (The second Globe, that is, as the first one burned to the ground in 1613.) This by itself is very interesting, since we do not have much evidence for putting together a picture of what the theater that saw the openings of Shakespeare’s greatest plays really looked like. If Yates is right, Fludd’s description gives us a great deal more to draw upon.

But Yates goes on to explore an even more intriguing possibility. It is not implausible that the architects of the Globe were well-acquainted with the ancient architectural works of Vitruvius. Moreover, they would have known them in the mystical grab in which those works had been draped by Giulio Camillo and the English Hermetic philosopher John Dee. If so, then those who designed the Globe would have been “skilled in the subtleties of cosmological proportion,” and they might well have dedicated these skills to their work. Perhaps they put together a theater that itself presented the frame of the universe to all those who entered, watched, and played within.

“All the world’s a stage,” indeed. And in this case, the stage is also all the world, framed now not by interstellar witches, but through the magical thinking of Renaissance philosophers. We need only the experience of theater-goers to confirm all this magic: in places such as the Globe, the right words, said in the right order, can open portals to distant galaxies, as well as to “everything that is otherwise hidden in the depths of the human mind.” That's magic.