Billions of cells die each day in the human body in a process called “apoptosis” or “programmed cell death”. When cells encounter stress such as inflammation, toxins or pollutants, they initiate an internal repair program which gets rid of the damaged proteins and DNA molecules. But if the damage exceeds their capacity for repair then cells are forced to activate the apoptosis program. Apoptotic cells do not suddenly die and vanish, instead they execute a well-coordinated series of molecular and cellular signals which result in a gradual disintegration of the cell over a period of several hours. 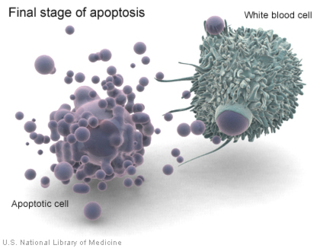 The remains of an apoptotic cell are being engulfed and ingested by a phagocytic white blood cell. Image via National Library of Medicine.

What happens to the cellular debris that is generated when a cell dies via apoptosis? It consists of fragmented cellular compartments, proteins, fat molecules that are released from the cellular corpse. This “trash” could cause even more damage to neighboring cells because it exposes them to molecules that normally reside inside a cell and could trigger harmful reactions on the outside. Other cells therefore have to clean up the mess as soon as possible. Macrophages are cells which act as professional garbage collectors and patrol our tissues, on the look-out for dead cells and cellular debris. The remains of the apoptotic cell act as an “Eat me!” signal to which macrophages respond by engulfing and gobbling up the debris (“phagocytosis“) before it can cause any further harm. Macrophages aren’t always around to clean up the debris which is why other cells such as fibroblasts or epithelial cells can act as non-professional phagocytes and also ingest the dead cell’s remains. Nobody likes to be surrounded by trash.

Clearance of apoptotic cells and their remains is thus crucial to maintain the health and function of a tissue. Conversely, if phagocytosis is inhibited or prevented, then the lingering debris can activate inflammatory signals and cause disease. Multiple autoimmune diseases, lung diseases and even neurologic diseases such as Alzheimer’s disease are associated with reduced clearance. The cause and effect relationship is not always clear because these diseases can promote cell death. Are the diseases just killing so many cells that the phagocytosis capacity is overwhelmed, does the debris actually promote the diseased state, or is it a bit of both, resulting in a vicious cycle of apoptotic debris resulting in more cell death and more trash buildup? Researchers are currently investigating whether specifically tweaking phagocytosis could be used as a novel way to treat diseases with impaired clearance of debris.

During the past decade, multiple groups of researchers have come across a fascinating phenomenon by which viruses hijack the phagocytosis process in order to thrive. One of the “Eat Me!” signals for phagocytes is that debris derived from an apoptotic cell is coated by a membrane enriched with phosphatidylserines which are negatively charged molecules. Phosphatidylserines are present in all cells but they are usually tucked away on the inside of cells and are not seen by other cells. When a cell undergoes apoptosis, phosphatidylserines are flipped inside out. When particles or cell fragments present high levels of phosphatidylserines on their outer membranes then a phagocyte knows that it is encountering the remains of a formerly functioning cell that needs to be cleared by phagocytosis.

However, it turns out that not all membranes rich in phosphatidylserines are remains of apoptotic cells. Recent research studies suggest that certain viruses invade cells, replicate within the cell and when they exit their diseased host cell, they cloak themselves in membranes rich in phosphatidylserines. How the viruses precisely appropriate the phosphatidylserines of a cell that is not yet apoptotic and then adorn their viral membranes with the cell’s “Eat Me!” signal is not yet fully understood and a very exciting area of research at the interface of virology, immunology and the biology of cell death.

What happens when the newly synthesized viral particles leave the infected cell? Because these viral particles are coated in phosphatidylserine, professional phagocytes such as macrophages or non-professional phagocytes such as fibroblasts or epithelial cells will assume they are encountering phosphatidylserine-rich dead cell debris and ingest it in their roles as diligent garbage collectors. This ingestion of the viral particles has at least two great benefits for the virus: First and foremost, it allows the virus entry into a new host cell which it can then convert into another virus-producing factory. Entering cells usually requires specific receptors by which viruses gain access to selected cell types. This is why many viruses can only infect certain cell types because not all cells have the receptors that allow for viral entry. However, when viruses hijack the apoptotic debris phagocytosis mechanism then the phagocytic cell is “inviting” the viral particle inside, assuming that it is just dead debris. But there is perhaps an even more insidious advantage for the virus. During clearance of apoptotic cells, certain immune pathways are suppressed by the phagocytes in order to pre-emptively dampen excessive inflammation that might be caused by the debris. It is therefore possible that by pretending to be fragments of dead cells, viruses coated with phosphatidylserines may also suppress the immune response of the infected host, thus evading detection and destruction by the immune systems. 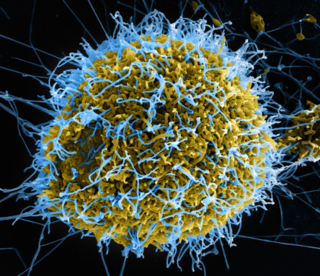 Viruses for which this process of apoptotic mimicry has been described include the deadly Ebola virus or the Dengue virus, each using its own mechanism to create its fake mask of death. The Ebola virus buds directly from the fat-rich outer membrane of the infected host cell in the form of elongated, thread-like particles coated with the cell’s phosphatidylserines. The Dengue virus, on the other hand, is synthesized and packaged inside the cell and appears to purloin the cell’s phosphatidylserines during its synthesis long before it even reaches the cell’s outer membrane. As of now, it appears that viruses from at least nine distinct families of viruses use the apoptotic mimicry strategy but the research on apoptotic mimicry is still fairly new and it is likely that scientists will discover many more viruses which rely on this and similar evolutionary strategies to evade the infected host’s immune response and spread throughout the body.

Uncovering the phenomenon of apoptotic mimicry gives new hope in the battle against viruses for which we have few targeted treatments. In order to develop feasible therapies, it is important to precisely understand the molecular mechanisms by which the hijacking occurs.  One cannot block all apoptotic clearance in the body because that would have disastrous consequences due to the buildup of legitimate apoptotic debris that needs to be cleared. However, once scientists understand how viruses concentrate phosphatidylserines or other “Eat Me!” signals in their membranes, it may be possible to specifically uncloak these renegade viruses without compromising the much needed clearance of conventional cell debris.