Good to eat, in traditional Mediterranean and oriental cuisines. Good food for farmed fish, not that they (the fish, I mean) really have much choice in the matter. Good as a source of possible biofuels. And now good for almost a million pounds of research funding. Your sister, the sea squirt, actual species Ciona intestinalis, coming shortly to a fjord near you.

The sea squirt is the ultimate in middle-aged complacency. It starts off looking a little bit like a tadpole, with a brain (of sorts, “cerebral vesicle” in diagram), a tail with a nerve cord and a stiffening rod (the notochord), an eye (ocellus), and a balance organ (statocyst). The reason it looks like a tadpole at this stage is because it is like a tadpole. The notochord is related to the backbone in vertebrates, a spinal cord runs parallel to it along the flexible tail, and at the head end of the spinal cord there primitive brain coordinates sensory inputs.

But when it matures, it sticks its head on a rock, and changes into its adult form, which is not much more than a mouth (branchial siphon), a stomach, and an exit tube (atrial siphon). It is a hermaphrodite, with one testis and one ovary. Both of these ejaculate into the exit tube, and there are rather complicated mechanisms to prevent self-fertilisation. It protects itself by growing an outer coat, or tunic, made of cellulose-like material, hence the scientific name name tunicate. The sea squirt eats, or to more exact reabsorbs, notochord, tail, sense organs and nervous system, since these are no longer needed, while it feeds by wafting water into its mouth cavity, and filtering out suspended particles. 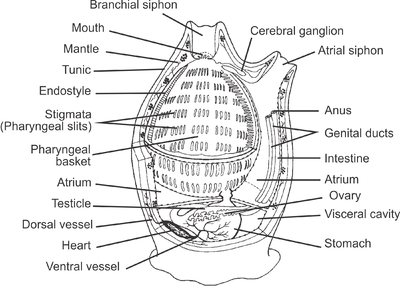 Tunicates are the sister group to vertebrates, meaning that tunicates and vertebrates are more closely related to each other than to any other group. They may not look like it, and for many years it was thought that the closest group to the vertebrates were lancelets, animals with simple fish-like bodies that burrow into sand. However, one clue to the contrary was the fact that most vertebrates, and tunicates during their adventurous youth, have a sense of smell while lancelets don't. (Whales don't have a sense of smell either, not having any use for it. However, their DNA still contains a degraded version of the genes that in other mammals code for sense organs, inherited as we would expect if their terrestrial ancestors.)

The matter was not settled until 2006, when molecular phylogeny (basically the same kind of DNA testing used every day in the courts to establish paternity) showed that vertebrates like you and I, and tunicates like sea squirts, are more closely related, and are what biologists call sister groups, while the lancelets are merely cousins (for a detailed technical discussion, see here). The partings of the ways took place some 550 million years ago, and a lot has happened since to obscure matters. Tunicates now have the simplest genome, but this is the result of gene loss. That of vertebrates shows the effect of doubling and redoubling, one of the many ways in which evolution can give rise to new information. However, evolution is not necessarily progress, nor are we more highly evolved than tunicates. We just happen to have evolved in what are, for us, more interesting directions.

So appearances can be deceptive. In fact, tunicates have quite a bewildering variety of life histories and reproductive strategies, including (for salps, which are close relatives of sea squirts) cloning, group sex, and a midlife sex change. Molecular comparisons between those tunicates that never settle down, and those that do, suggest that the sedentary habit has been discovered more than once, and that tunicates can evolve new body forms with unusual rapidity.

The Norwegian government has just spent 8.7 million Norwegian krone on these creatures. Why, and what exactly do they hope to gain from it? The idea is to anchor huge sheets of plastic in selected Norwegian fjords, with buoys attached to the top to keep them vertical, and allow the chosen species of sea squirt to colonise them. The fjords are ideal in shape for this, being steep-sided drowned valleys, carved out by ice age glaciers. The sea squirts will require no feeding, because they get enough nutrition from suspended fragments of debris. They will not exhaust this food supply, as the water is replenished twice daily by the tides. Thanks to their cellulose-like tunics, they attract no predators, so harvesting them will not deprive any other species of its normal food, and as an overall accumulator of protein the project is predicted to be 100 times as efficient per unit area as grazing land animals. So you can harvest the sea squirts, grind them up, and use them as fish feed. This is potentially very big business, because Norway is the world's leading producer of farmed salmon, which until now have needed to be fed, themselves, on fish. The sea squirts are even efficient accumulators of omega-3 fatty acids, produced by microorganisms, which end up in the salmon.

There is more. At the moment, biofuels are of two kinds; those derived from starch, and those from vegetable oils. Both of these compete directly with food. There is very serious doubt as to whether corn alcohol, so beloved of farmers in the American Midwest, actually contributes anything to reduction of global warming, after taking into account the energy spent growing and fertilizing the grain, and the fact that more food will need to be grown elsewhere. My own view is that biofuels will never make a real contribution to the world's energy supply until we develop a good technology for making alcohol from cellulose. This is more difficult than making it from starch. Both starch and cellulose are polymers derived from glucose, the only difference being the way in which glucose units are joined up, and how to unravel cellulose and convert it into biofuel is a hot research topic. But, as the group funded by the Norwegian Research Council points out, cellulose from wood is blended with a tough polymer called lignin, which is even more indigestible. I would add that other plant sources of cellulose are also complex mixtures, and that in any case, land used to grow biofuel crops becomes unavailable for agriculture, or for natural carbon-fixing processes such as peat formation. So if cellulose biofuels do turn out to have a future, a marine source has many advantages.

Current developments are, I suspect, under wraps for commercial reasons, but the research group involved have already taken out patents on the production of biofuels from tunicates, and the use of tunicate material as feed for (non-human) animals.

Two questions remain unanswered. Can a good way be found, on a bulk scale, to remove the water which makes up 95% of the body mass of the sea squirts? And a further question of my own; what will the farmed salmon taste like?