On an early September night in 1907, fifteen hundred white lumber mill workers set off on a rampage against Indian immigrants in the coastal town of Bellingham, Washington. The Indians, also mill workers, were predominantly from Punjab; most were turbaned Sikh men. The rioters saw the Indians as aliens, outsiders, and racial inferiors who were taking away American jobs, jobs that should go to white men. As they made their way across Bellingham, the mob, according to historian Joan Jensen,

swept down to the waterfront . . . where many of the Indians lived. Battering down the doors, the mob . . . pocketed money and jewelry, and dragged Indians from their beds . . . Those who did not move fast enough were beaten . . . Fifty men stormed the surrounding mills, pulled Indians from their bunks and began to burn the bunkhouses.

By the end of the night, two hundred Indian men, beaten and bruised, had been rounded up like cattle into Bellingham’s City Hall. Over the next days, most of the Indians chose to leave Bellingham, and the United States, in search of work in British Columbia. Local white residents cheered as their train rolled out of the station. 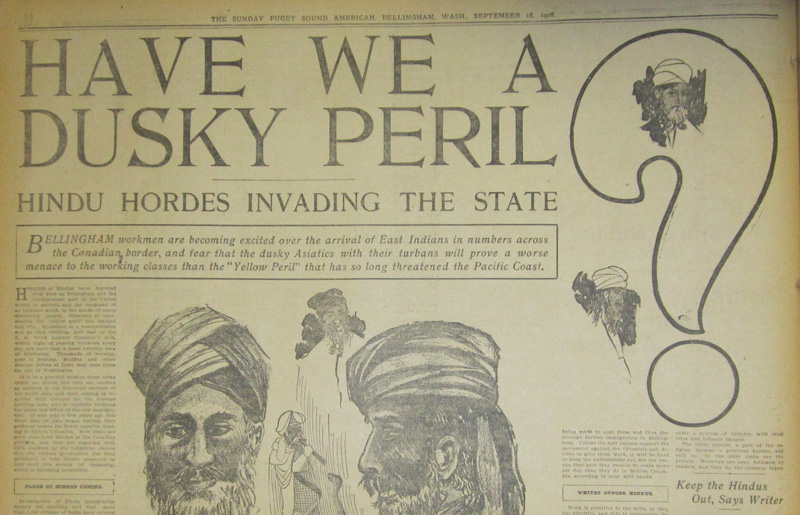 It is not well known among Americans today that immigrants from British colonial “India”—that is, from present-day India, Pakistan, and Bangladesh—were entering the United States alongside the Irish, Italians, Greeks, Germans, Poles, Russians, and other Europeans during the “golden age” of immigration between the 1890s and 1920s. It is also not well known that, though their numbers were small, these Indian or “Hindu” migrants (“Hindu” being a racial term applied to all South Asians) figured prominently in the public outcry for restrictions on immigration. Members and supporters of the West Coast-based Asiatic Exclusion League were the first to promote the idea that a nefarious horde of “Hindus” was about to swamp the United States. But their discourse became national in scope, and came to include claims that thousands of Indian and Chinese seamen (the former, primarily Muslims from present-day Bangladesh) were jumping ship, smuggling drugs, and engaging in human trafficking through northeastern ports. In the opening decades of the twentieth century, in newspapers, public speeches, and congressional testimony, Indian immigrants were portrayed as a looming threat to the United States. Alongside other Asian laborers, Indians were viewed in much the same way that immigrants from Mexico, Central America, Haiti, and elsewhere south of the U.S. border have been in recent years.

At the same time, as historian Seema Sohi has argued, Indians occupied a unique place in the broader anti-Asian rhetoric of the early twentieth century. Because Indian nationalist exiles had been using what they believed to be the safety of U.S. soil to plan and coordinate anti-colonial activities against the British, they became a focus of the state’s broad efforts to quell political radicalism in the 1910s. While West Coast labor leaders warned of a “Tide of Turbans” sweeping in from the Pacific to take away American workers’ jobs, congressional advocates for exclusion warned that Indian immigrants were promoting subversion, Bolshevism, and anarchism, and were a threat to national security.