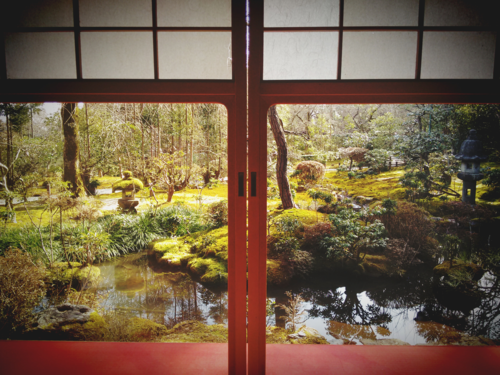 I tremble in anticipation of beginning to write this piece. I want to write about Japan, you see? And I want to write about having traveled to Japan. This, as you may have surmised, is a hopeless task. For Japan is overlain with meaning as umami-like and as un-graspable as the coating of wasabi on your peas. See? I did it already. I gave you a familiar metaphor, and I gave you a visceral sensation to inhabit. Done and dusted, and here I give you Japan in a sealed aluminium foil package. But surely there is more I can say? Surely I can give you many more metaphors to make clear the fact that I do not grasp anything at all.

This, in writing, is not admissible. The least, one has to be able to say, is that one does not find things familiar, and hence one dislikes the place. Hark then to the first of the Great Mughals, Babur telling us how he hates India because it lacks wine, melons, and gardens. I must at least feel like Malinowski, who sits notebook in hand, frustrated and complaining about the Trobrianders, and yet forging along seeking meaning. And yet, I do not want to write of strong likes or dislikes, because my travels produced none.

A friend and I made plans to go to Japan during the Chinese New Year. This was only the beginning of our various confusions. Inspired by Junot Diaz's article where he implores one to visit Fukuoka, we booked tickets instead to Tokyo, and the bullet-train to Kyoto. Also, I ignored how his visions of chicken sashimi did not account for my vegetarianism. I read nothing, I anticipated nothing. Armed with a passport and visa, I set of to conquer the Far East.

Arriving at the end of winter, in the middle of an already hectic year, I landed in Tokyo on a cold, rainy day and walked into a universally familiar neon-lit airport populated by tourists and residents also clad in orange neon platform shoes. After having sleepily concluded that the country seemed to have put in place some sort of national costume, I awoke to the epiphany that I had mistaken a set of people traveling together for all of Japan. Maybe the neon shoes helped them keep track of each other. Disciplinarity with flair, I concluded. I liked the sound of this country already, even if I only liked people in its transitional spaces.

My first evening at the airport also involved my first successful act of cultural negotiation, or in other words, the Japanese toilet. The Japanese toilet is a work of art. Never mind the warmed seat, or the accompanying music. Focus instead on the intricacy of the washing arrangements provided from within the humble commode – shower (warm and cold), bidet, and spray. I did not want to leave. Zizek, I thought, might want to look at redoing his terribly entertaining discussion on toilets and ideology.

This cultural translation aside, everything else about Japan remained untranslated. Very few signs English, and most people launched into rapid Japanese at the sight of my decidedly un-Japanese face. I realize this is also a cliched reference. Japan, lost in translation, and therefore continually inscrutable should clearly be a project that I refuse participation in, if only to salvage my academic credentials.

Yet, this lack of translation produced the one thing so decidedly Japanese that days after returning, I am struck by epiphany. Silence. My travels produced silence. I heard nothing that I understood; I needed to say nothing to induce understanding. There is an incredible liberty in being released from language. It produces quietude, thought, ignorance, and non-curiosity. Sounds wafted past in non-language and did not register, and I pointed at things to make myself understood. My traveling companion did one better, and made gargling noises at drugstore personnel to indicate her needs for cough syrup.

In parallel, it also produced a sharp attentiveness to a world of objects. Subway station maps, convenience stores, signboards, posters, buildings, graffiti, teddy bears by riverbanks, screen-printed doors and shutters, sweets of all shapes and sizes and persuasions, wrapping paper, stationery, policemen's bicycles with specially crafted slots for batons, sticks with tiny toys dangling from one end and held up music-conductor-like by tour organizers, and lace doilies on cab seats. 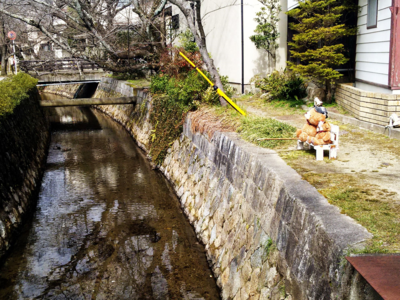 We also noticed people's faces. In the absence of communication, we stared long and hard, hoping that faces would give something away. While we received no insights, and were stared at as many times as we looked, we noticed what is common knowledge about Japan's aging population. Wikipedia informs me solemnly that in 2011 around 23% of the country's population were over 65, while 11.4% were already over 75. This is a grave concern for an already indebted country, and a general area of interest for this world that privileges the excesses of an able, working, and productive young population. Except that in this country of gerontology's excesses, we espied this aging population on their feet and up and about far more than any teenyboppers I've ever had the good fortune of knowing. In a tiny Kyoto lane we sat ourselves down in a café owned and staffed by an elderly lady and gentlemen who brought us coffee, even as another entertained us with his tales of having been on the Buddhist trail in India. Everywhere we went, even as we complained about having to walk endlessly, we saw other aging Japanese walking and working about their daily lives. All the taxi drivers who ferried us around were over 65, treated our lack of both linguistic and topological knowledge with gentle courtesy, and steered us our ways anyway. The country might well need to start offering lessons in knowing how to age gracefully.

We were also lost very often. That terribly useful instrument of modern life, Google Maps, was a spectacular failure for us in Japan. All signs and signals showed up, but in Japanese. We gazed long and hard into our telephone screens, and then walked on perplexed. As a result, we walked many kilometers a day circling around our destinations, and attempting many a conversation. J.R.R.Tolkien might have produced in us the notion that not all who wander are lost, but we most certainly were; and in perpetuity at that. But then, the pleasure of being lost is only available on holiday.

One morning, in the process of being so lost, we set out in search of the famed Shinjuku Gyoen National Garden. Many subway stops, and many wrong turns later, we found our way into one of its gates by the time it was afternoon. Bundling up our jackets, we wandered around in search of some sign of an early cherry blossom, if only to have pictures to show how our travels to Japan had not been in vain. As we wandered, we grew quieter, and the sun came out. We walked to the open spaces that displayed resplendent lone trees with early pink blushes. In true Japanese form, a horde of photographers bearing frightening looking zoom lenses of various sizes had gathered around, and were clicking away in apocalyptic frenzy. Even as we heard the whirring of shutters, three little green birds with disproportionaly large white eyes were putting on a show. They strutted and somersaulted and whizzed past the blossoms, waiting for the cameras to catch them. For a moment, everything came together. 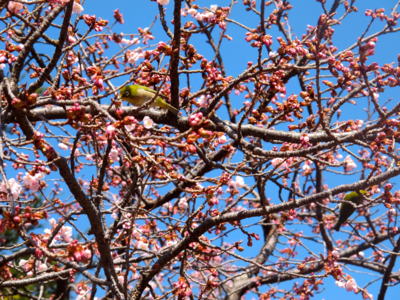 Pico Iyer writes eloquently about how “The Japanese room is a training in inwardness”, and how clutter in a room produces a mind that “gets dizzy and overwhelmed; if there is just one, it grows so calm and spacious – so attentive – that in that one it can find a universe.” It is true that I traveled through Japan, a rather oblivious spectator. I more often than not did not find things. Neither a love for seafood, nor a working knowledge of Japanese, nor Mt. Fuji. I tried, albeit halfheartedly, and then resumed wandering, slowly. But I grew quiet, and let go of plans, itineraries, tourist cravings, and meaning. I let things happen slowly.

Encounters with the Other take on different modalities. They produce resistance, anger, curiosity, dissent, enthusiasm, and friction. My encounters with Japan produced things I cannot seem to be able to articulate. I imagine I will have to go back.