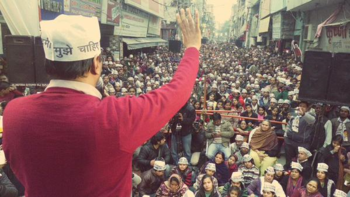 What to make of the verdict in Delhi’s Assembly elections this month? After a dismal show in the national election last year, when many had written it off, the Aam Aadmi (‘common man’) Party achieved a crushing win in Delhi with 67/70 seats. Delhi may be electorally small but being the capital of the nation and of empires past, the headquarters of the national media, and a trendsetter for other regions, its control has great emotional significance—all too evident in AAP’s main rival BJP’s desperate eleventh-hour tactics to win in Delhi.

The verdict has drawn many explanations: AAP’s strategy, grassroots campaign, and populist promises; people’s disaffection with the fueling of communal strife by RSS, VHP, and other BJP-affiliated Hindu right-wingers; the invisibility of BJP’s much-hyped ‘development’; BJP’s arrogance, disorganization in Delhi, and its dirty campaign; AAP’s success in framing this as a two-way contest which enabled anti-BJP votes to consolidate behind AAP; Modi’s $18K splurge on a suit—in retrospect, a major wardrobe malfunction, and so on. Whatever the mix of factors, last year’s ‘Modi wave’ now seems subdued, if not stalled.

Various polls show that AAP won due to greater support from the poor, the rural sections, slum dwellers, lower castes and Dalits, religious minorities, students, and women voters of Delhi—an enviable constituency for social liberal democrats like me. I’m not a member of AAP or any other party but I wanted AAP to win—not only because the alternatives were much worse but also because, despite some lamentable populism, there are many hopeful and progressive things in AAP’s politics and 70-point manifesto. These include two innovations it already practices: transparency in campaign finance and ensuring candidates have no heinous criminal charges. AAP’s win may bolster BJP’s opposition in upcoming state elections. It may even slow the rise of BJP’s communalism and its model of development in which corporate sector growth is prioritized far above social welfare and primary services—a GDP-growth led model akin to neoliberalism and almost always marked by rising disparity, shrinking safety nets, crony capitalism, and faster ecological damage. Indeed, why pursue GDP and corporate sector growth if not to primarily help increase human knowledge and reduce human suffering? 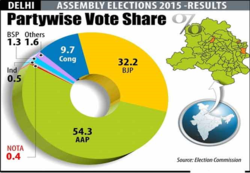 I have my own misgivings about AAP but in politics—especially in the rotten landscape of Indian politics—all we’re entitled to is hope for improvement, not perfection. Other progressive parties in Delhi, like the BSP and the Communists, either don’t have their act together or are wedded to ideas that no longer find enough traction. Though its leadership is still largely privileged-class men, AAP has grown a lot since its birth from the IAC movement, which was a big tent that included people of all ideological stripes, united only by their dislike of public corruption. With help from Yogendra Yadav, political scientist and admirer of socialist leader Rammanohar Lohia, AAP developed some ideological ballast, at least going by its formal vision and manifesto. In shaping its core values and politics—and professing a certain pragmatism of means—AAP then parted ways with a host of disagreeable travelers (e.g., Anna Hazare, Baba Ramdev, Kiran Bedi). Such churn is only natural in a new, maturing party—including internal tussles over control of the party and its direction.

Whether due to its moralistic rhetoric or due to other motivations, AAP drew intense scrutiny from a corporate media that rarely took the same critical stance towards BJP or Congress, both of which are financed by the same corporations. AAP certainly has many problematic aspects—its overly narrow idea of ‘corruption’, for instance. Some left/liberal intellectuals in India, however, continue to get so caught-up in berating this or that policy or dubious remark or mistake of AAP or Kejriwal that they often fail to notice the opportunity in AAP to make our current politics more progressive, at least along some dimensions (e.g., public spending on social goods, tackling communalism, fighting graft). While criticism and scrutiny are essential—as long as they don’t merely feed an obsessive armchair game of competitive radicalism on social media—we often let the perfect be the enemy of the good and refuse to see obvious distinctions across our options.

On the Future of AAP

I think it can be instructive to see AAP’s potential as Congress 2.0. Consider some commonalities first. Both parties are seen as left-of-center and relatively secular. Congress, too, has long appealed to religious minorities and the poor (recall ‘garibi hatao’). The social composition of AAP’s leadership resembles that of the old Congress: almost all Hindu upper-caste ‘honest’ men, who see nothing wrong with this lack of diversity (Congress of recent decades is somewhat better than AAP). This means an absence of many important social perspectives and even a blindness to certain prejudices in their ranks. Isn’t this too a kind of corruption? No wonder both parties have been laggards in approaching caste-based reservations, settling to barely accept and follow the progressive vision and laws initiated by other parties. Both see themselves as progressive on ‘women’s issues’, yet do little to question patriarchy. Despite the slogans, AAP fielded only 6/70 women (Congress 5/70)—below even the national average of 11 percent women legislators (the global average is 21 percent). It has 0/7 women in its Delhi Cabinet, 1/22 in its National Executive, and 0/9 in its Political Affairs Committee (Congress beats AAP here; BJP actually beats both!).

Both Congress and AAP subscribe to a similar idea of secular nationalism and ‘tolerant Hinduism’ while making little room for religious minorities in their upper ranks and often invoking God in their rhetoric. AAP’s pet slogans—Bhaarat Mata, Inquilab, Vande Matram—evoke an era of agitational Congress nationalism in which, too, many a idealistic ‘common man’ participated to demand freedom from the British; the demand in AAP’s case is to ‘free the nation’ from a venal, indigenous political class and to establish swarajya (‘self-rule’). Both speak of egalitarian and democratic ideals but invoke and adore Gandhi, not Ambedkar. With such a shared weltanschauung, is it any surprise that AAP gained its vote share largely at the expense of Congress? (BJP’s vote share remained practically unchanged.) 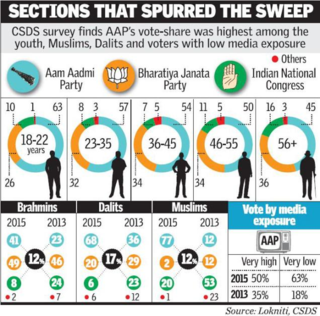 But in what ways has AAP exceeded Congress so we might think of it as Congress 2.0? Transparent campaign finance. Firm opposition to public corruption and ‘VIP culture’. Distaste for dynasty. Youthful energy and tech savvy. Above all, AAP has aggressively and firmly staked its future on the promise of improving basic human infrastructure and services (water, electricity, hospitals, education, affordable housing, curbing graft, roads, cleanliness, toilets, waste disposal, physical security, free wifi, etc.). The AAP package is unusual enough, and Delhi—clearly seduced, and in light of its competitors’ track records—has voted to take a chance. Warts and all, AAP may be the best that the human material in Delhi can bubble up at this time; too bad for those waiting for the perfect revolution.

Whether AAP turns out to be a big advance over Congress will depend on its ability to create real governance innovation, deliver solid results, adhere to their core ideals, avoid big fiascos, and alter its own social composition to represent a wider diversity of Indians. Even within a single heart, as in mine, this election’s verdict can provide cause for genuine hope, skepticism, and even despair. If AAP governs well in Delhi, it’ll likely secure itself a future in many other states by growing into that part of the political spectrum long occupied by Congress. And if AAP fails, it’ll become yet another churn in the great ocean of Indian democracy.