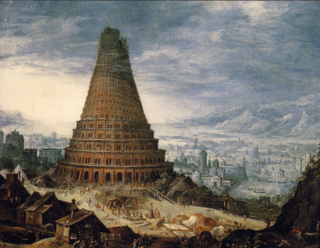 We all seek to capture the world with a net of language. Yet it is in the nature of nets to capture some things and let others slip away, and that goes for languages too. Our words turn experiences into objects, qualities, and actions, and we can build these into a kind of structure, a tower reaching into the sky – but (again) towers can only go so far, and there are always negative spaces surrounding the structure and its beams. What is left unsaid speaks volumes.

We might resign ourselves to this fact – the inescapable limits of what's sayable – but in fact a great many minds have sought to construct the perfect language, one that carves reality at its joints and captures the grand shebang of human experience. Presumably God was speaking such a language when he spoke the world into being, and perhaps he taught this language to Adam. Or perhaps the perfect language need only be carefully constructed from given, atomic elements that reflect the most basic concepts a mind can have, with rules that keep it innocent from the goofy twisting and mashing that the accidents of history impart to our tongues. Or perhaps we can cook up a language that, like physics, captures the essence of phenomena and parses away every nonessential feature. The payoffs would be inestimable: we would have not only a language that could not possibly confuse, but a language – like that of Jonathan Swift's horsey Houyhnhnms – whose very grammar would preclude ever saying the thing which was not.

This was a hope that inspired the young Gottfried Wilhelm von Leibniz. He recalled that, as a teenager studying Aristotle, he arrived at “this remarkable thought, namely that a kind of alphabet of human thoughts can be worked out and that everything can be discovered and judged by the comparison of the letters of this alphabet and an analysis of the words made from them.” Leibniz's fundamental idea was to identify radically atomic concepts and compose molecular sentences out of them, so that once we translated our thoughts into legitimate terms, we could see whether they were true, possibly true, or totally confused.

This dream – the creation of a characteristica universalis – became Leibniz's lifelong project. His earliest publication, “A Dissertation on the Art of Combinations” (1666), aimed to do for metaphysics and science what Euclid had done for geometry. Before long, Leibniz sought to make his perfect language susceptible to mechanized computation. Fundamentally, his idea was to attach atomic concepts to prime numbers, under the guiding metaphor that just as every natural number is the product of primes, so too should every complex concept be the product of atomic concepts.

This would mean that determining the true meaning of a statement simply meant doing some dividing. “For example,” he explained,

if the characteristic number of man is found to be 6 [2=rational, 3=animal, so 2×3=6], and that of the ape is 10, it is obvious that the concept of ape does not include that of man, nor that of man the ape, since 10 cannot be divided evenly by 6, nor 6 by 10. So if you wish to know whether the concept of wisdom is contained in that of a just being, that is, whether nothing more is required for wisdom than what is already contained in justice, you need merely examine whether the characteristic number of just can be divided exactly by the characteristic number of wise. If the division is impossible, it will be clear that something more is required for wisdom than what is in justice, namely, a knowledge of reasons. For one can be just by custom or habit, even though he cannot give a reason for what he does.

With Leibniz's conceptual calculus, philosophers would be wed to the same definitions of the terms, and arguing over whether justice implies wisdom would be as futile as arguing over whether 10 is divisible by 6. And this is just as it should be. “The only way to rectify our reasonings,” he wrote in The Art of Discovery, “is to make them as tangible as those of the Mathematicians, so that we can find our error at a glance, and when there are disputes among persons, we can simply say: Let us calculate, without further ado, to see who is right.”

And Leibniz was willing to walk this dog from A to Z. When he arrived in England in 1673, he carried under his arm a box of gears that he believed capable of multiplying, dividing, and extracting square and cube roots. (See “The Stepped Reckoner” for more details.) He found that some members of London's Royal Society had already advanced upon the same line of thought. John Wilkins, the Bishop of Chester, had already published a massive work entitled An Essay towards a Real Character and Philosophical Language (1668). The work aimed to provide a fixed set of primitive concepts through which all other concepts could be defined with clarity and precision. In order to carry out the project, Wilkins had to divvy up the world into classes of genera, differentia, and species, and assign to each class a representative word that would encode its position in the overall scheme. Rhodri Lewis, in his fascinating and meticulous Language, Mind, and Nature, offers an example of how Wilkins' language would unfold:

With such a system, philosophers could not possibly be in confusion over what they were saying: each word would carry its own meaning within itself. Of course, the devious mind of Jonathan Swift went Wilkins one better when he described the proposal of the Laputans, which was that “since words are only names for things, it would be more convenient for all men to carry about them such things as were necessary to express the particular business they are to discourse on.” Those Laputans with a lot to say employed porters to lug about their vocabularies, and when two such men met in the streets, they “would lay down their loads, open their sacks, and hold conversation for an hour together; then put up their implements, help each other to resume their burthens, and take their leave.” It is fair to say that we have all witnessed analogous conversations.

In his Essay, Wilkins further supplied a set of quasi-hieroglyphic symbols (“the real character”) to be used of in place of the words of his invented language. The Lord's Prayer, for example, would look like this:

It is important to realize that Wilkins and Leibniz were not alone in their attempts. Creating perfect languages was one of the many rages of that revolutionary age. Early on, in 1622, Francis Bacon had composed his Abecedarium novae natura in an attempt to battle all the ways in which language can create for us misleading idols. The Czech reformer Comenius embarked on similar projects, hoping to settle or avoid the muddled disputes over religion that had led to the Thirty Years war. Cave Beck, Joachim Becher, and Athanasius Kircher all presented systematic ways to translate terms from diverse languages into one another by working through a common core of basic concepts – systems which, as it happens, could also be re-purposed as cryptographic devices. Indeed, in his book The Search for a Perfect Language, Umberto Eco reports seeing a bibliography listing 83 separate projects to construct universal languages over the 17th and 18th centuries. One gets the sense that, entering into any London coffeehouse in 1647, one would be assaulted by a babble of savants, each speaking his own perfect language.

Neither has the search for a perfect language gone away. The Leibnizian project was resurrected in the first half of the 20th century, as philosophers like Rudolf Carnap tried to establish a philosophical language that leashed itself to logical empiricism – an effort whose legacy haunts the formulae-laden writing style of analytic philosophers to this day. And there are of course continued efforts to promote international auxiliary languages, like Esperanto and Interlingua, or (for the more logically inclined) Logban. But it is curious that no such project has yet become truly viable. Most of us seem to prefer the ambiguous and messy flexibility of the languages that have evolved to meet the ambiguous, messy world of our experience.