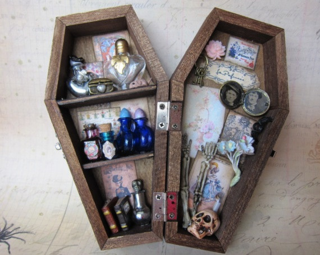 (Image from “AhtheMacabre” on Etsy)

As I'm closer to death than birth, I think from time to time about what to do with my dead body. Of course, in the main I don't really care. I'll be done with it, and it will be nothing other than Other People's Problem, in the deepest existential sense of those words. But sometimes I try to imagine what would be most meaningful to my surviving friends and family. For the most part, I come up empty.

My own parents are buried alongside their relatives far away in a country churchyard – and that sounds nice! – but the fact is that none of their descendants visit it with any regularity. I do think often of my parents, whom I loved and miss. But I don't know what further emotional or spiritual charge I would get by looking at a stone with their names on it and reflecting on the fact that, six feet down, there are some organic materials that once constituted their bodies. My father-in-law's ashes are in a simple wooden box which I see from time to time, and when I see them I say to myself, “Alas, poor Gerald! I knew him!” – but the experience doesn't amount to much. At best the box serves as a momento mori, and at worst it poses the problem of who's going to care for this box for the rest of time. So I don't have any good examples to follow.

I could donate my body to medical science, and I see clearly the virtue of doing so. Let the dead teach the living! But I can't quite commit myself to the idea. This raggedy donkey has been my good and true companion, for the most part, and I feel like I owe it some respect. I know it's irrational, but the thought of giving it over to medical students to cut open and explore strikes me as ingratitude. (I lived with a med student many years ago, and wasn't much reassured by the experience.)

What I would like best, of course, is for my body to be laid out on a wooden Viking ship and sent into the middle of the lake as a flaming arrow arcs overhead into the sky and delivers the fire to the pyre. But goodness knows what health and safety officers would have to say about this, and I'd hate to bequeath to my children the labors of such paperwork and legal expense – let alone the trouble of finding a builder of Viking ships. The myriad hassles and expenses would suck all the meaning and fun out of it.

The basic problem is that it just doesn't matter. It won't matter to me, obviously, and in the end it won't matter much to the comparative few who will ever remember that I once lived. So maybe it's best overall to let the med students have at it, or burn it down spread the ashes to the wind. (As my dad used to recommend, “Put the ashes on the sill, open the window, and turn on the fan!”)

Still, it can't be denied that having some sort of physical touchstone to those we remember is important. From time to time I catch hold of some little object – a watch, a necklace, a penknife – that once belonged to those I remember, and the experience of now holding what they once held gives me a vital, undeniably physical connection to them. It confirms to my senses what my memory tells me – that these people once lived and acted in this world, and they were not always mere representations in my head. These objects connect me to to them more meaningfully than would any carved stone or urn or box – containers which they themselves never knew.

This recognition brings me to an idea I would like to propose. (It may be that this doesn't work for everyone, but here goes.) Forget about our dead bodies – let them be donated or burned or whatever. It really doesn't matter. There is another way to honor our bodies and remind those down the road that we once were real. Each of us should invest in a small, nicely-crafted box, in no case bigger than a shoebox. Into it should go the stuff we carry around – wallet, key chain, glasses, little trinket from the nightstand, pliers, cell phone (why not?), decoder ring, etc. – the things with which our bodies routinely interacted. Then, upon death, let the box pass to a designated survivor.

That's not too much of a burden for any survivor to manage. They can pull it out from time to time, like a time capsule of a loved one, and enjoy the physical connection with you once again. Over time, the problem of “what to do with this stuff” will solve itself: the box will be lost or its contents scattered, sure as the second law of thermodynamics – but by then it won't matter, and no one will much care, since what's getting scattered are small, nifty objects rather than bits of dead person.

And in the meantime, imagine having your own Wunderkammer of the personal effects of your great-grandmother, your uncle, your dear sister. You could use these artifacts to tell your loved ones about people they never met who meant something to you. Your kids will feel more closeness and familiarity to your grand-dad by holding his fountain pen than they would with a trip to the cemetery. Containers of strange and curious objects – what better way is there to commemorate the bodies that house our lives?

“An unconcluding postscript” (a phrase which, when you think about it, is a succinct way of describing our current funerary practices):

The larger philosophical problem, the one to which this little proposal of mine is only a feeble solution, is that we just don't have a metaphysics that has anything interesting to say about death. If we believed in souls and spirits, in reincarnation, in a mystical symbiosis among living things, in our being cthonic offspring of a living demiurge – any of these schemes would give us some direction as to what to do with our dead bodies. But the skimpy, scientistic metaphysics with which most of us content ourselves tells us only that dead bodies are biomedical waste. As a culture, we may have dim and distant recollections of having once believed something more about ourselves, but these whispers no longer have any grounding in what we now take to be true. So we are left in a funereal halfway house, with a set of meaningless rituals which we try to package up as meaningful even though any real meaning has long left the building.

The most direct and honest solution to the larger philosophical problem is to come clean and finally own up to our fate of becoming just so much biomedical waste, to be disposed of in the same way as any such waste, like severed limbs and discarded organs. I will be the first to decry this solution as both unfortunate and inhuman – indeed, a reductio ad absurdum of our metaphysics. But what is the alternative? A richer worldview? And from what quarter shall we expect that?