Freddie deBoer on his blog: 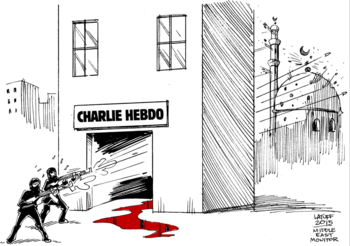 We are having a series of loud, impassioned, righteous conversations about questions like “Should people murder?” and “Should we have the right to publish cartoons?” We’re debating, in other words, dead moral questions, and for the same reason we always do: because that debate allows us to ignore the ones that might lead us to a different place than the celebration of our own liberal righteousness. To read the people writing about this attack, this is the fundamental question at hand: were these killings OK? If that were actually a moral question worth asking, then it would provoke disagreement. And yet I see no disagreement. None at all. Please: point me to any piece that endorses these killings that does not come from the looniest fringes of our political order. This Jacobin piece is getting passed around as an example of left-wing illiberalism, and yet in its very first paragraph, it asserts what absolutely everyone else is asserting: that there are no justifications for this, that the attacks are abhorrent, that free speech must be defended. Please, point me in the direction of a defense of these attacks that is anything resembling prominent or empowered. You are all debating an idea that no one at all is advancing.

The question of the price that Muslims will pay for these attacks– that is a live question, the security and rights of the Muslim people is very much uncertain, indeed. If there is anything that this country has stood for in the last 15 years, it is its willingness to sacrifice anything to fight Muslim extremism, and in the process, innocent Muslims. We have invaded multiple Muslim countries, sent secret raids into far more, killed Muslims with drones and bombs, wiretapped Muslims at home and abroad, sent agents to infiltrate their mosques, thrown dozens of them into a prison camp without trial or judicial review, assassinated them without due process, tortured them, and spent billions of dollars and thousands of lives in doing so. Of all the things that you should fear your government will lose the resolve to do, fighting Muslim terrorists should be at the absolute bottom of your list. There is no function that our government has performed more enthusiastically for years. Can any credible person doubt our commitment to fighting Muslim terrorists, in 2015?

Peter Beinart and Ross Douthat and Jon Chait and hundreds more will take the time in the week to come to beat their chests and declare themselves firmly committed to brave ideas like “murder is bad” and “free speech is good.” None of them, if pressed, would pretend that we are at risk of abandoning our commitment against murder or in favor of free speech. None of them think that, in response to this attack, we or France or any other industrialized nation is going to pass a bill declaring criticism of Islam illegal. In fact, all of them would, if pressed, likely admit that the result will be literally the opposite: that we will become more belligerent against Muslim extremism, not less; that we will become more aggressive in our posture against Islam, not less; that the public mood, already dark towards Islam, will grow only darker. They know all of this. They simply won’t tell you about it.