It's 2015. The year has begun clandestinely, as have I. The days suddenly feel lighter, and full of possibility. Even as I say this, I feel performative. After all, how can the beginning of a year be anything but full of possibility? Beginnings are where we take a measure of ourselves, and our world, and speak aloud of all the things we will accomplish in the year and the ways in which we will not end December on a note of things we could have done, a list of 'almosts'.

I almost wrote a book once, I might say.

I almost saw a leopard once. This was at Yala National Park. We had been driving around for a few hours on a late December afternoon. The sun was going down. Much like other urban tourists, we were there in the hope of our big prize, a leopard sighting. Under the watchful eyes of a guide whose last name was Don, we scoured the grounds seeking signs of the famed park dweller. The sun went down, and we were almost ready to leave disappointed when Mr.Don signaled to indicate that all hope was not lost yet. We veered away from the other vehicles and turned onto a long stretch of road by a swamp to wait by a tree. Somewhere across the pond, we could hear the cries of deer. The cries came intermittently, growing louder, and then fainter. The guide, the driver, and my companion and I sat quietly as we were gradually enveloped by darkness. The quality of that waiting is difficult to capture. The leopard was at its prey, a few metres away even as we waited for it to emerge. Things were so quiet. Every now and then, a faint cry broke through dusk. We sat in silence, sharing the same hope, and I suppose, the same sorrow. A deer might be killed. The leopard might go hungry. Only one of two things would happen. Of course, while everyone comes to Yala to see leopards, I had also wanted to come to see where the tsunami had swept away people. Having read Sonali Deraniyagala's incredibly brave memoir of loss and pain, “Wave”, I was drawn to this remote outpost that had witnessed the events she speaks so poignantly about. Many years ago, my graduate class and I survived an earthquake but had been far enough to feel its effects only perfunctorily. To this day, the only memory I have of this event is of feeling like perhaps the dog had hidden under my bed. That, and a faint visual memory of the earth heaving like waves.

So at the place that still bore signs of the giant wave, we waited for the leopard to show. I meditated on that uncanny quiet evening upon loss, and fear, and darkness. No leopard came. I'd like to think that the deer got away.

As I looked through my notes on Yala to remember the details of a year ago, I squinted at my diary and at my faint notes. I remember being at a hotel room outside Yala later that night playing with a black and white kitten that pulled at my hand as I tried unsuccessfully to write. Swatting it with one hand, I had grabbed a blunt pencil with the other and jotted down as much as I could recall from the day. This was why the notes were faint; first the kitten, and then the pencil.

Does anyone write with pencils anymore? I have always thought that the humble instrument only serves artists, architects, schoolchildren and of course, as the answer to that tired old question about innovative low-tech solutions for space travel.

A few months ago, I wrote a column about writing letters. Deciding to take my own advice, I hunted for foolscap sheets and finding none, I turned the house upside down. I was rewarded for my efforts with a box of fine pencils. I know that my some kind person had found these for me from a trip to Germany long years ago. Such beautiful inventions, I thought. Fine tipped, lean, and so full of promise, albeit a quiet kind. I am currently reading Steinbeck's “Journal of a Novel”. Steinbeck pencils daily letters to his editor even as he crafts “East of Eden” and also writes lovingly of the tools of his craft, pencils. He changes pencils, finds favorites, and remarks specifically on how useful his indulgent purchase of an electric sharpener has been. I marvel at how prolific he is, writing letters about his book even as he writes his book. I also marvel at his object attachments that lead to such immense productivity. Mine only lead to hoarding. But then, I console myself, Steinbeck has his Vera. On most days, I am neither Nabokov nor Vera. What I am is a fine procrastinator.

Every other day, as I tend to my almost-book, I organize my notes, adjust my chair and sink into it in repose, imagining my picture on the inside cover of a book dust jacket. Keeping in mind the advice of other infinitely more published friends, I look off-camera. These important details squared away, I knit my brows at the difficult business of finding actual content, and desperately seek the next distraction. Today, it's pencils.

My handwriting when writing with pencils is terrible. It often tears through paper and can be very uneven. It tells me the truth that I do not want to acknowledge, that I am heavy-handed. Pencils should be held like the edge of a kite string. I am also terrible at flying kites.

I like sharpening pencils though, and I like making flowers out of the delicate whorls of pencil shavings. Flowers such as these would make beautiful New Year greeting cards I think. But then, we do not send cards anymore either. New Year rituals long years ago included the bulk purchase of UNESCO or CRY greeting cards, the hunt for black leather address books, and wintery afternoon sessions of writing out in long hand names, wishes, and hopes for acquaintances, and friends at large. These years, New Year rituals include escaping from everybody at large. 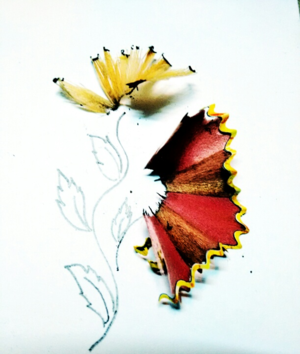 In further procrastination, I return to Steinbeck and I make notes with a newly sharpened pencil. Confidently, I draw out these tentative, and hesitating observations by the side of his carefully ordered sentences. Pen marks are loud and pushy. Pencil marks merely engage, and in such self-effacing ways at that. The pleasure of writing on the margins of books is really quite singular. Susan Sontag writes of the pleasures of writing aloud. I hate it. I much prefer this silent interlocution with a silent author. For long years, I couldn't write in books, believing that I was defacing them. Writing in pencil helps, because surely pencil marks can be erased? Things can rarely be erased these days. We leave signs of our presence everywhere and all signs are under observation. There is no starting over. Our histories are in code, and all our secret pleasures open to scrutiny. We must not write anymore except when things we write are not worth scrutiny. Perhaps, writing with pencils might make for a good New Year resolution. But resolutions are a tired old game. Everything about our craven craving for order at the beginning of the year comes already exposed and foiled in the shape of resolutions.

So yes, we are in a new year. What is the New Year, but the old in another guise? Except, as any good post-structuralist will tell you, guises are all we have. Happy new year folks.