Faisal Devji in The Hindu: 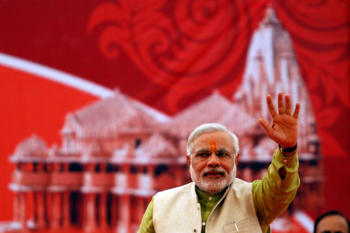 One of the peculiarities of Indian political debate is that everyone claims to be secular while accusing others of not being so. Secularism’s hegemony as an idea was made clear by L.K. Advani, when he coined the now famous term “pseudo-secular” to describe his political enemies. But if secularism is so dominant an idea, this is because it is and has always been deployed as a polemical category as much as a constitutional principle, and indeed its insertion into the Constitution by Indira Gandhi was itself a partisan act. In colonial times, for example, Congressmen identified secularism with nationalism, which was in turn held to be the real antonym of communalism. In other words it was the pluralism and popularity of the Congress, compared with the supposedly sectarian appeal of Hindu and Muslim parties, that was seen as defining its secular credentials, and this in a demographic rather than constitutional way.

Since Independence, however, secularism is increasingly opposed to communalism, with the nation no longer central to its definition. Is it therefore being separated from a strictly populist logic to assume a purely juridical character — and does this indicate the failure of the nation to demonstrate its plurality and therefore secularism, which must instead be sought in the pre-modern past? Even in the days of its alleged dominance under Nehru, secularism could hardly be said to possess its own history or even existential reality, given that its membership included both the religious and irreligious. Indeed, secularists had to lay claim to explicitly religious precedents, such as bhakti or Sufi forms of devotion, and the pluralistic festivals with which these were often associated. In other words, the condescending reference was invariably to the “folk” devotions that had never, in fact, been part of the “culture” of self-professed secularists.

And so both the Congress and the Bharatiya Janata Party (BJP) continue to invoke a populist and indeed majoritarian logic to define the secular, but the changing nature of the Indian polity has given this rhetoric a quite different meaning. For the folk elements of its demographic logic have been replaced by varieties of ostensibly high-culture religiosity that no longer needs to display any pluralism, as long as it is assumed to be “tolerant”, a term that in the nationalist past had been used for another kind of high culture, that of royalty and aristocrats like Asoka or Akbar. Nehru himself preferred this form of the secular, which also served as a historical mask for the Congress’s quasi-colonial vision of itself. Before Independence, after all, its claims to hold the demographic middle ground between religious extremes had mirrored British attempts to constitute the colonial state as a neutral third party between Hindus and Muslims, itself a classically liberal position, despite the fact that it was deployed in an illiberal political system.