First, remind me, when I’m writing my first book, to try to get The Economist to write a racially insensitive review. I’m pretty sure Edward Baptist’s sales are pretty terrific right now.

The Economist has withdrawn the offending book review and apologized (the book in question, and the article and apology). Here’s the uncontroversial bit:

Mr Baptist, an historian at Cornell University, is not being especially contentious when he says that America owed much of its early growth to the foreign exchange, cheaper raw materials and expanding markets provided by a slave-produced commodity. But he overstates his case when he dismisses “the traditional explanations” for America’s success: its individualistic culture, Puritanism, the lure of open land and high wages, Yankee ingenuity and government policies.

Nothing in history (least of all the growth of the largest economy humankind has ever known) has a single explanation. Academics like to overstate their case and need to be reined in a little.

Even so, here’s the jawdropping finale:

…Slave owners surely had a vested interest in keeping their “hands” ever fitter and stronger to pick more cotton. Some of the rise in productivity could have come from better treatment. Unlike Mr Thomas, Mr Baptist has not written an objective history of slavery. Almost all the blacks in his book are victims, almost all the whites villains. This is not history; it is advocacy.

What could have shed light on this, had The Economist writer bothered to read the literature (and had the academics bothered to write in comprehensible prose)?

First, when do employers use coercion and how well does it work? There’s a pretty new and exciting literature here:

* Violence and pain work better in labor markets where people have really poor options, and are easily controlled, like children or the least educated. You see this in child labor during British industrialization, or even in child soldiering in Uganda (my own work). Here’s a graph of how long someone stayed with a rebel army in Uganda based on his age of conscription. The paper argues that ones you can scare and indoctrinate the easiest (in this case, kids) stay longest: 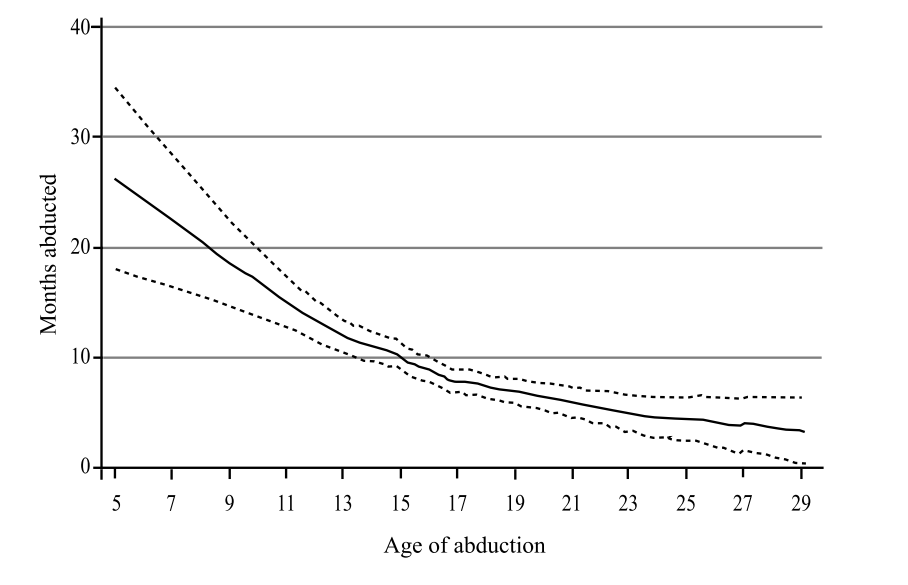