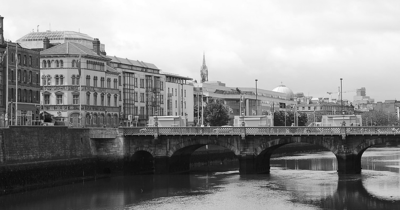 It says something about a city, I suppose, when there is heated debate over who first labeled it a dirty place. The phrase “dear dirty Dublin”, used as a badge of defiant honor in Ireland’s capital to this day, is often erroneously attributed to James Joyce. Joyce used the term in Dubliners (1914) a series of linked short stories about that city and its denizens. But the phase goes back at least to early nineteenth century and the literary circle surrounding Irish novelist Sydney Owenson (Lady Morgan) who remains best known for her novel The Wild Irish Girl (1806) which extols the virtues of wild Irish landscapes, and the wild, though naturally dignified, princess who lived there. Compared to the fresh wilderness of the Irish West, Dublin would have seemed dirty indeed.

The city into which I was born more than a century later was still a rough and tumble place. It was also heavily polluted. This was Dublin of the 1970s.

My earliest memories of the city center come from trips I took to my father’s office in Marlborough St, just north of the River Liffey which bisects the city. My father would take an eccentric route into the city, the “back ways” as he would call them, which though not getting us to the destination as promptly as he advertised, had the benefit of bringing us on a short tour of the city and its more unkempt quarters.

My father’s cars themselves were masterpieces of dereliction. Purchased when they were already in an advanced stage of decay, he would nurse them aggressively till their often fairly prompt demise. One car that he was especially proud of, a Volkswagen Type III fastback, which had its engine to the rear, developed transmission problems and its clutch failed. His repair consisted of a chord dangling over his shoulder and crossing the back seat into the engine. A tug at a precisely timed moment would shift the gears. A shoe, attached to the end of the chord and resting on my father’s shoulder, aided the convenient operation of this system. That car, like most the others in those less regulated times, was also a marvel of pollution generation, farting out clouds of blue-black exhaust which added to the billowy haze of leaded fumes issuing from the other disastrously maintained vehicles, all shuddering in and out of the city’s congested center at the beginning at end of each work day.

A route into the city that I especially liked took us west of the city center, and as we approached Christ Church Cathedral I would open the window to smell the roasting of the barley which emanated from the Guinness brewery in Liberties region of the city, down by the Liffey. Very promptly I would wind up the window again as we crossed over the bridge, since the reek of that river was legendarily bad.
The Irish playwright Brendan Behan wrote in his memoir Confessions of an Irish Rebel (1965), “Somebody once said that ‘Joyce has made of this river the Ganges of the literary world,’ but sometimes the smell of the Ganges of the literary world is not all that literary.”

Historically, the River Liffey received raw sewage from the city and though a medical report from the 1880s concluded that the Liffey was not “directly injurious to the health of the inhabitants” — in the opinion of these doctors crowded living and alcohol consumption were the main culprits — the report concluded nonetheless that the Liffey’s condition “is prejudicial to the interest of the city and the port of Dublin.” It was time to clear up the mess.

The smell of the Liffey like other polluted waterways came not just from the ingredients that spill into it, but also from algae that bloom upon the excess nutrients that both accompany the solid waste and that seeps into the water from the larger landscape. The death and sulfurous decay of those plants, contribute to those noisome aromas.

Despite the installation of a sewage system for the city in 1906 and its expansion in the 1940s and 1950s the smell of the river remained ripe as Brendan Behan attested. Even in the late 1970s the smell of the river persisted and was remarked upon in popular culture. The song “Summer in Dublin” by the band Bagatelle contains the lines, “I remember that summer in Dublin/And the Liffey it stank like hell.” It was a big hit in the summer of 1978.

So why did the smell persist? Part of the problem with the tenacity of the Liffey’s pollution, and its associated odors, is that the river is a tidal one. It ebbs and flows into polluted Dublin Bay into which raw sewage continued to be dumped long after the creation and expansion of municipal sewage treatment plants. The rancid smells of the River Liffey remained powerful as I was motored over it with my father in the 1970s.

On other occasions, this time with my mother, I would get to observe the streets of Dublin city at a leisurely pedestrian pace. She would take one of her six kids into the city on her Saturday morning shopping rounds and would walk the selected child into the ground. The footpaths of the city were strewn with litter — sweet wrappers, newspapers, paper bags, plastic bags, discarded fast-food, random scraps of paper, cigarette butts — dog feces dappled the curbs, vomit pooled in doorways, the narrow streets were car-congested, and at evening-time, snug on the smoke-belching bus trundling home, I’d watch the sun sinking, gloriously crimson, hazily defined, leaving behind the bituminously smoky atmosphere of Dublin for another day.

It seemed like there was no end in sight to Dublin’s pollution problem, but clearly the situation could not have been left to go on forever. And even if a nineteenth century medical commission was not impressed that Dublin’s environmental pollution, from the river at least, posed a grievous problem, nonetheless the ubiquitous squalor of the city was not conducive to the good health of the Dublin’s city. The stench of river, the garbage in the streets, the smog of the city had to be remediated. As one Reuters report from the autumn of 1988 reported: “A thick pall of smoke from thousands of coal fires has become trapped over Dublin in freezing, wind-free weather, leaving a million coughing Dubliners to face streets at midday so gloomy it looks as if night had already fallen.” The links between high levels of smog and increased death rates concerned the medical community and a spokesperson from a major Dublin hospital reported that “Even patients without respiratory complaints have been complaining about throat irritation and coughing.” (Toronto Star).

So change eventually came, some of it, admittedly, compelled by European legislation, a reasonable price for Ireland’s economic union with Europe. Acting on the Air Pollution Act, 1987 the capital city was declared a smokeless zone in 1990. It became illegal to sell or distribute bituminous coal, the smokiest kind, in all parts of Dublin city and its suburbs. By the early 1990s the city had lost the aroma of soot and the Dublin sunset lost some of its luster, but, in compensation, its air quality dramatically improved. The smoke in Dublin city dropped from 192 mg per cubic meter of air in December, 1989, to a mere 48 microgrammes the following December.

The River Liffey is generally less aromatic these days, though it is still very much a polluted urban river. Massive improvements, including the building of a new treatment plant near the harbor about ten years ago, has reduced raw sewage both in the river and in Dublin Bay. That being said the levels of faecal coliform, that is, E coli, associated with human waste, remains “disturbingly excessive” in some stretches of the River Liffey. There are heavy odors emanating from the new plant, an expensive problem that will need to be resolved.

I glanced down at the river this past summer while I was visiting home and saw that garbage still bobs up and down in the tidal waters, or clings to the algae at its bricked-up banks, before being inexorably tugged out to sea.