Mike Healy on the Al Jazeera show 'People and Power': 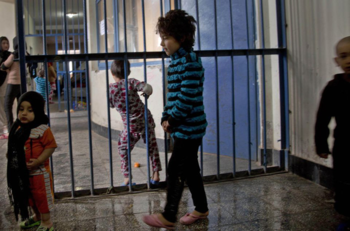 Once we got there, perhaps the biggest surprise was just how young the majority of the children were. But actually it made sense that the very youngest children including newborns in need of the greatest care remained with their mothers — in prison. When the fathers have to travel hundreds of miles to find work, it is left to relatives to care for the children who remain outside prison. One father described how he is forced to lock his children in the house for their own safety while he is out working. Even when they are at home, they are imprisoned.

However, in a country where reputation is everything, the children of prisoners are often disowned and left to live off the streets. Needless to say, these children are more vulnerable to dangers such as drug addiction, and inevitably, crime. On the inside, the children growing up in prison are desensitised to their environment and likely under the influence of genuine criminals. Inside or out, the system encourages criminality and despair.

The numbers of figures involved are difficult to estimate, especially as the children may have spells in prison followed by time with relatives outside, but its thought to be in the hundreds at least. There are also orphanages and children's centres throughout Afghanistan, some of them excellent, like the USAID-funded centre in Mazar-e-Sharif, but others of a poor standard where abuse is rife. It is understandable if incarcerated mothers are reluctant to trust their babies to the care of strangers miles away.

We interviewed a local psychologist on the subject. He described how vulnerable children will struggle to understand their predicament. For example, if their mothers insist that they are innocent and yet they are living in jail, this will give them a skewed understanding of morality and justice, and a lack of motivation therefore to be good citizens.

In addition, they may come to resent their own mothers for the lives they have given them. And even if the mothers were innocent to begin with, they may become damaged and cynical parents as the years pass. Both mothers and children may eventually become institutionalised and feel safer behind the prison walls, especially when life outside is so harsh.

Read the rest and watch the segment here.