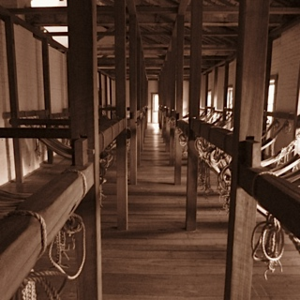 These manifestations of convict heritage are indicative of my generation. By the 1980s, fuelled by a resurgence in family history, an embrace of the ‘new nationalism’ and the opening of state archives, Australians were discovering their convict ancestors anew – no longer shameful skeletons best kept in the closet, they could now be regarded as a badge of honour, or even as the founders of the nation (hence the naming of the iconic ferries). During the official celebration of the Bicentenary of British colonisation, convicts were even cast as the first migrants, credited with kicking off the ‘nation of immigrants’ in a similar fashion to the Mayflower pilgrims in America. But the government-choreographed 1988 celebrations were also marked by a profound collective unease. Could our convict ancestors be founders, as well as invaders? The gulf between stories of settler survival against the odds, and the mounting historical evidence of the violent dispossession that was part of that ‘survival’, could no longer be ignored or glossed over. As a result, the History I leant at school was vastly different to the previous generation of Australian schoolchildren. While explorers and empires still held sway, they were joined by other historical actors – workers, women, migrants and Indigenous Australians, each with a compelling claim to belonging in the story of the nation.

Since I began to research representations of transportation at convict heritage sites in Australia for the CArchipelago project, I’ve gained a new appreciation of the heritage I unknowingly soaked up as a child. As an Australian without direct ancestral links to convicts, I wonder whether I would feel differently if the connections were familial, as well as cultural. And what about international visitors to Australia – what kind of convict heritage do they encounter? And how has it changed over recent years? Heritage – or ‘things worth saving’, in David Lowenthal’s apt words – can encompass the tangible, such as places, and the intangible, such as songs; the visible, such as buildings, and the hidden, such as archaeological remains. But most importantly, the designation of ‘heritage’ significance infers an opinion, a ‘worth’, a judgement on the past and a construction of that past for a present audience or consumer. These constructions are constantly changing, making the study of convict heritage sites a fascinating window onto the ways that Australians have related to their carceral past and presented that past to others. And now is a particularly interesting time to conduct this research, as eleven of Australia’s historic places were in 2010 recognised by UNESCO as being of ‘outstanding universal value’. Encompassing colonial homesteads, probation stations, barracks, penitentiaries, female factories and coal mines, across New South Wales, Western Australia and Tasmania, these places now form the Australian Convict Sites World Heritage Property. I have been studying these sites and others from afar, combing through the writings of historians, archaeologists, tourism researchers and heritage practitioners to gain an overview of the main themes and debates in the field. A recent trip to Sydney afforded me the opportunity to experience two of these sites in person: Hyde Park Barracks, and the Old Great North Road on the Hawkesbury River. Both sites are included in the World Heritage listing, and both date from a similar period in the history of the colony, however they represent very different ‘experiences’ for a visitor, as I discovered.