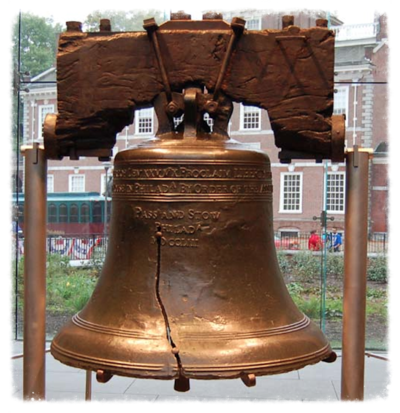 The sound of money talking is echoing ever louder throughout the land. The recent ruling of the U.S. Supreme Court unfettered the ability of the wealthiest Americans to buy free speech in the form of deregulating contributions to political campaigns. In the words of Justice Stephen Breyer (writing for the minority in McCutcheon v. The Federal Elections Commission) “Where enough money calls the tune, the general public will not be heard.” We the people now have to raise our voices even louder if we are to have influence in our political system. It is all too easy to become discouraged, but we can begin to gather inspiration for social engagement by returning to explore first principles.

An old symbol for a new struggle

On any given day you might see a group of school children crowding around the Liberty Bell for a lesson on the history and the mythology of the United States of America. The Pennsylvania State House bell was commissioned to commemorate the fiftieth anniversary of William Penn's 1701 Pennsylvania Charter of Privileges. It later came to be known as the Independence Bell, associated with the founding of the nation, and eventually as the Liberty Bell, when it was adopted by the movement for the abolition of slavery.

The renaming of the bell by the abolitionists was inspired by the inscription, “Proclaim Liberty throughout the land unto all the inhabitants thereof,” quoted from the Book of Leviticus, chapter 25, verse 10. The part of the verse immediately preceding the quote speaks of hallowing the fiftieth year, known in biblical times as the jubilee year, and so it was fitting to choose this quote for a golden anniversary, but the rest of the text may surprise you. Leviticus 25 goes on to detail the requirements of the jubilee year. After seven periods of seven years, it is time to press the proverbial restart button on the nation's economy. “And you will return, each to his possession, each to his family will you return.” And it goes on from there to set forth what the inhabitants of the land are not allowed to do with the harvest that year.

The ancient Israelites were instructed that the process of amassing wealth comes to a halt every fifty years, when all property is returned to the original owners. (The books of Numbers and Joshua describe in detail the apportioning of the land to the families.) There can be no landed class lording over a peasant class. Come what may over the course of a lifetime, the system does not allow for the emergence of a sustained economic gap with a dispossessed impoverished population existing across the social divide from an institutionalized wealthy class.

Does “Liberty” ring a bell?

In order to secure the rights to “Life, Liberty and the pursuit of Happiness” deemed self-evident in the U.S. Declaration of Independence, governments are instituted deriving their just powers from the consent of the governed. In 2014 the ever-widening socio-economic gap is eroding the stable foundation of a country founded on principles of social justice. As corporations, stock indices and the wealthy among us recover from years of recession, an ever-larger portion of the population is left to make do with less than the basic cost of living. Our government interceded on behalf of the banking industry, the auto industry and industrial farmers, among others, bailing out many who were too big too fail. It seems obvious, even self-evident, that many of us, perhaps the large majority, are just the right size to fail. The time has arrived for the governed to withhold consent, before the fabric of society is irrevocably torn asunder.

It is inevitable that many wealthy people will use their economic power to protect their interests, and even to amass greater wealth, but it is not inevitable that the wealthiest members of society will always succeed in marginalizing and dispossessing others. It is entirely unlikely, however, that the Captains of Industry will convene to declare that they have more than enough profit. It simply would not serve their self-interest, so it is safe to assume that, for all intents and purposes, it is not possible for them to promote any sort of equitable distribution of wealth in society. There is no reason to think that they themselves might decide that the market—inadvertently or otherwise—promotes the interests of the wealthy, and that the rules of the game really ought to be changed against their favor. It is, however, possible for other interested actors in a democratic society to bring about that change. Somewhere in between that which we cannot avoid and that which we cannot bring about, there are aspects of our lives upon which we can exercise our free will. In spite of the fact that much is beyond our control, we have the potential to become agents of change.

What's a citizen to do?

It is time to reconfirm the values upon which the country was founded. We need to move further, beyond proclaiming, toward achieving ‘liberty throughout the land.' It is time to root our consent to be governed in these deeper truths, which we hold to be self evident:

1. The Pursuit of Happiness rests upon upholding the principles of the U.S. Constitution: “establishing justice,” and “insuring domestic tranquility,” wherein all can enjoy peace of mind, “promoting the general welfare,” unfettered by the excesses of over-indulgence. This is the ancient definition of happiness which Thomas Jefferson learned as a student of Greek philosophy, and which he aimed to instill in the enlightened experiment we have inherited from generations of activists: pioneers and innovators, legislators and judges.

2. The right to Liberty, “in order to form a more perfect union,” obligates citizens to bear mutual responsibility for the all of the members of society.

3. The right to Life in a society that is constituted upon liberty and the pursuit of happiness is the right to a good life, neither extravagant nor impoverished. This requires—at the very least—the right to health care, quality public education and the right to a living wage in return for employment. These are entirely reasonable and necessary requirements if we are to “secure the blessings of Liberty to ourselves and our posterity.”

The biblical injunction to return property back to the original owners every fifty years may not be possible in our world today. It may never have actually taken place to the degree to which it is prescribed in the Book of Leviticus, but the moral imperative is clear: A person can become wealthy over a lifetime, but no one can own the earth or treat it as private property for all time. We have long known (but perhaps recently forgotten) that a just society cannot be constituted upon a system with no limitation on ownership and no protection from the tyranny of the wealthy. The businesses, schools, hospitals and services that form the backbone of our economy cannot stand with integrity if employees are not able to earn a decent living from their wages.

Still today, the Liberty Bell is symbolically tapped on the Fourth of July and on Martin Luther King Day, celebrating a proud tradition of people standing up to injustice and building a better society than the one they inherited. Toward that goal, we need a minimum wage as a first step toward passing a law that requires a living wage for full-time employment. And we need to fund all our schools as state and national priorities. Our current system of funding education through local real estate taxes ensures that affluent communities provide privately for their own public education, while children in many urban and rural districts have their futures determined by separate and unequal schools. The problem in poorly funded districts is widespread poverty, not a lack of test preparation. We all benefit from living in well-educated communities of people with solid opportunities. It is our right and our responsibility to uphold the tradition of working toward a more perfect union.