Geteiltes Leid ist halbes Leid (“Shared sorrow is half the sorrow”) is a popular German proverb which refers to the importance of sharing bad news and troubling experiences with others. The therapeutic process of sharing takes on many different forms: we may take comfort in the fact that others have experienced similar forms of sorrow, we are often reassured by the empathy and encouragement we receive from friends, and even the mere process of narrating the details of what is troubling us can be beneficial. Finding an attentive audience that is willing to listen to our troubles is not always easy. In a highly mobile, globalized world, some of our best friends may be located thousands of kilometers away, unable to meet face-to-face. The omnipresence of social media networks may provide a solution. We are now able to stay in touch with hundreds of friends and family members, and commiserate with them. But are people as receptive to sorrow shared via Facebook as they are in face-to-face contacts? A team of researchers headed by Dr. Andrew High at the University of Iowa recently investigated this question and published their findings in the article “Misery rarely gets company: The influence of emotional bandwidth on supportive communication on Facebook“. The researchers created three distinct Facebook profiles of a fictitious person named Sara Thomas who had just experienced a break-up. The three profiles were identical in all respects except for how much information was conveyed about the recent (fictitious) break-up. In their article, High and colleagues use the expression “emotional bandwidth” to describe the extent of emotions conveyed in the Facebook profile.

In the low bandwidth scenario, the profile contained the following status update: 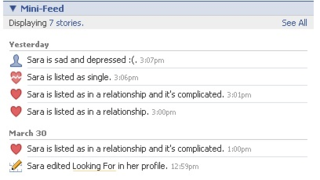 Finally, the high emotional bandwidth profile not only contained the updates of the low and medium bandwidth profiles, but also included a picture of a crying woman (the other two profiles had no photo, just the standard Facebook shadow image). 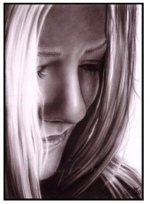 The researchers then surveyed 84 undergraduate students (enrolled in communications courses, average age 20, 53% female) and presented them with screenshots of one of the three profiles.

They asked the students to imagine that the person in the profile was a member of their Facebook network. After reviewing the assigned profile, each student completed a questionnaire asking about their willingness to provide support for Sara Thomas using a 9-point scale (1 = strongly disagree; 9 = strongly agree). The survey contained questions that evaluated the willingness to provide emotional support (e.g. “Express sorrow or regret for her situation”) and network support (e.g. “Connect her with people whom she may turn to for help''). In addition to being queried about their willingness to provide distinct forms of support, the students were also asked about their sense of community engendered by Facebook (e.g., “Facebook makes me feel I am a part of a community'') and their preference for online interactions over face-to-face interactions (e.g., “I prefer communicating with other people online rather than face-to-face'').

High and colleagues hypothesized that the high emotional bandwidth profiles would elicit greater support from the students. In face-to-face interactions, it is quite common for us to provide greater support to a person – friend or stranger – if we see them overtly crying and therefore the researchers' hypothesis was quite reasonable. To their surprise, the researchers found the opposite. The willingness to provide emotional or network support was significantly lower among students who viewed the high emotional bandwidth profile! For example, average emotional support scores were 7.8 among students who saw Sara entering the “sad and depressed:(” update (low bandwidth) but the scores were only 6.5 among students who also saw the image of Sara crying and updating her relationship status to single (high bandwidth). Interestingly, students who preferred online interactions over face-to-face interactions or those who felt that Facebook created a strong sense of community responded positively to the high bandwidth profile.

There are some important limitations of the study. The students were asked to evaluate whether they would provide support to a fictitious person by imagining that she was part of their Facebook friends network. This is a rather artificial situation because actual supportive Facebook interactions occur among people who know each other. It is not easy to envision support for a fictitious person whose profile one sees for the first time. Furthermore, “emotional bandwidth” is a broad concept and it is difficult to draw general conclusions about “emotional bandwidth” from the limited differences between the three profiles. Increasing the sample size of the study subjects as well as creating a broader continuum of emotional bandwidth differences (e.g. including profiles which include pictures of a fictitious Sara Thomas who is not crying, using other status updates, etc.), and also considering scenarios that are not just related to break-ups (e.g. creating profiles of a fictitious grieving person who has lost a loved one) would be useful for an in-depth analysis of “emotional bandwidth”.

The study by High and colleagues is an intriguing and important foray into the cyberpsychology of emotional self-disclosure and supportive communication on Facebook. This study raises important questions about how cyberbehavior differs from real world face-to-face behavior, and the even more interesting question of why these behaviors are different. Online interactions omit the dynamic gestures, nuanced intonations and other cues which play a critical role in determining our face-to-face behavior. When we share emotions via Facebook, our communication partners are often spatially and temporally displaced. This allows us to carefully “edit” what we disclose about ourselves, but it also allows our audience to edit their responses, unlike the comparatively spontaneous responses of a person sitting next to us. Facebook invites us to use the “Share” button, but we need to remember that online “sharing” is a sharing between heavily edited and crafted selves that is very different from traditional forms of “sharing”.