On the evening of March 3 in 1514, Steven is sitting next to Friar Clay in a Nottingham pub, covering his face with his hands.

“I am losing the will to live”, Steven sobs, “Death may be sweeter than life in this world of poverty, injustice and war.”

“Do not despair, my friend”, Clay says, “for the printing press will change everything.”

Let us now fast-forward 500 years and re-enact this hypothetical scene with some tiny modifications.

On the evening of March 3 in 2014, Steven is sitting next to TED-Talker Clay in a Nottingham pub, covering his face with his hands.

“I am losing the will to live”, Steven sobs, “Death may be sweeter than life in this world of poverty, injustice and war.”

“Do not despair, my friend”, Clay says, “for the internet will change everything.” 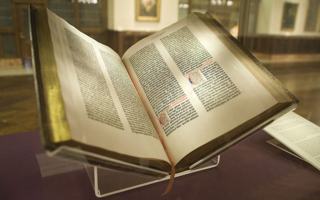 It is more difficult for us to dismiss Clay's advice in the second scene because it echoes the familiar Silicon Valley slogans which inundate us with such persistence that some of us have begun to believe them. Clay's response is an example of what Evgeny Morozov refers to as “Internet-centrism”, the unwavering belief that the Internet is not just an information dissemination tool but that it constitutes the path to salvation for humankind. In his book “To Save Everything, Click Here: The Folly of Technological Solutionism“, Morozov suggests that “Internet-centrism” is taking on religion-like qualities:

“If the public debate is any indication, the finality of “the Internet”— the belief that it's the ultimate technology and the ultimate network— has been widely accepted. It's Silicon Valley's own version of the end of history: just as capitalism-driven liberal democracy in Francis Fukuyama's controversial account remains the only game in town, so does the capitalism-driven “Internet.” It, the logic goes, is a precious gift from the gods that humanity should never abandon or tinker with. Thus, while “the Internet” might disrupt everything, it itself should never be disrupted. It's here to stay— and we'd better work around it, discover its real nature, accept its features as given, learn its lessons, and refurbish our world accordingly. If it sounds like a religion, it's because it is.”

Does Morozov's portrayal of “Internet-centrism” as a religion correspond to our current understanding of religions? “Internet-centrism” does not involve deities, sacred scripture or traditional prayers, but social scientists and scholars of religion do not require deism, scriptures or prayers to categorize a body of beliefs and practices as a religion.

The German theologian Friedrich Schleiermacher (1768-1834) thought that the feeling of “absolute dependence” (“das schlechthinnige Abhängigkeitsgefühl“) was one of the defining characteristics of a religion. In a January 2014 Pew Internet survey, 53% of adult internet users in said that it would be “very hard” to give up the internet, whereas only 38% felt this way in 2006. This does not necessarily meet the Schleiermacher threshold of “absolute dependence” but it indicates a growing perception of dependence among internet users, who are struggling to envision a life without the internet or a life beyond the internet.

Absolute dependence is not unique to religion, therefore it may be more helpful to turn to religion-specific definitions if we want to understand the religionesque characteristics of Internet-centrism. In his classic essay “Religion as a cultural system” (published in “The Interpretation of Cultures“), the anthropologist Clifford Geertz (1926-2006) defined religion as:

Today's Silicon Valley pundits (incidentally a Sanskrit term originally used for learned Hindu scholars well-versed in Vedic scriptures) excel at establishing “powerful, persuasive, and long-lasting moods and motivations” and endowing “conceptions of general order of existence” with an “aura of factuality“. Morozov does not specifically reference the Geertz definition of religion, but he provides extensive internet pundit quotes which fit the bill. Here is one such example:

“To be a peer progressive, then, is to live with the conviction that Wikipedia is just the beginning, that we can learn from its success to build new systems that solve problems in education, governance, health, local communities, and countless other regions of human experience.”

—Steven Johnson in “Future Perfect: The Case For Progress In A Networked Age“

One problem with abstract definitions of religion is that they do not encompass the practice of religion and its mythical or supernatural aspects, which are often essential parts of most religions. In “The Religious Experience“, the religion scholar Ninian Smart (1927-2001) does not provide a handy definition for religions but instead offers six “dimensions” that are present in most major religions: 1) The Ritual Dimension, 2) The Mythological Dimension, 3) The Doctrinal Dimension, 4) The Ethical Dimension, 5) The Social Dimension and 6) The Experiential Dimension.

How do these dimensions of religion apply to Internet-centrism?

1) The Ritual Dimension: The need to continuously seek connectivity by accessing computers or seeking out wireless connectivity, checking emails or social media updates so frequently that this connectivity exceeds one's pragmatic needs could be considered a ritual of Internet-centrism. If one feels the need to check emails and Facebook or Twitter updates every one to two minutes, despite the fact that it is unlikely one would have received a message that required urgent action, it may be an indicator of the important role that this ritual plays in the life of an Internet-centrist. Worshippers of traditional religions feel uncomfortable if they miss out on regular prayers or lose their rosaries that allow them to commune with their God, and it appears that for some humans, the ritual of Internet-connectivity may play a similar role.

Ideas of “cognitive surplus”, crowdsourcing knowledge to improve the human condition, internet-based political revolutions that will put an end to injustice, oppression and poverty and other powerful metaphors are used to describe this poorly defined mythical entity that has little to do with the physical internet. The myth of egalitarianism is commonly perpetuated, yet the internet is anything but egalitarian. Social media hubs have millions of followers and certain corporations or organizations are experts at building filters and algorithms to control the information seen by consumers who have minimal power and control over the flow of information.

3) The Doctrinal Dimension: The doctrine of Internet-centrism is the relentless pursuit of sharedom through the internet. The idea is that the more we share, the more we collaborate and the more transparent we are via the internet, the easier it will be for us humans to conquer the challenges that face us. Challenging this basic doctrine that is promoted by Silicon Valley corporations can be perceived as heretical. It is a remarkable testimony to the proselytizing power of the prophets and pundits in Silicon Valley that people were outraged at the government institution NSA for violating our privacy. There was comparatively little concern about the fact that the primary benefactors of the growing culture of sharedom are the for-profit internet corporations that make money off our willingness to sacrifice our privacy.

4) The Ethical Dimension: In many religions, one is asked to follow aspects of a religious doctrine which have no direct ethical context. For example, seeking salvation by praying alone to a god on a mountain-top does not necessarily require adherence to ethical standards. On the other hand, most religions have developed moral imperatives that govern how adherents of a religion interact with fellow believers or non-believers. In Internet-centrism, the doctrinal dimension is conflated with the ethical dimension. Sharedom is not only a doctrinal imperative, it is also a moral imperative. We are told that sharing and collaborating is an ethical duty.

This may be unique to Internet-centrism since the internet (both in its physical or its mythical form) presupposes the existence of fellow beings with whom one can connect. If a catastrophe wiped out all humans but one, who happened to adhere to a traditional religion, she could still pray to a god (ritual), believe in salvation by a supernatural entity (mythological) and abide by the the religious laws (doctrinal). However, if she were an Internet-centrist, all her rituals, beliefs and doctrines would become meaningless.

5) The Social Dimension: Congregating in groups and social interactions are key for many religions, but Internet-centrism provides more tools than any other ideology, cultural movement or religion for us to interact with others. Whether we engage in this social activity by using social media such as Facebook or Twitter, by reading or writing blog posts, or by playing multi-player games online, Internet-centrism encourages us to fulfill our social needs by using the tools of the internet.

6) The Experiential Dimension: Most religions offer their adherents opportunities for highly personal, spiritual experiences. Internet-centrism avoids any talk of “spirituality”, but the idea of a personalized experience is very much a part of Internet-centrism. One of its goals is to provide opportunities for self-actualization. We all may be connected via the internet, but Internet-centrists also want us to believe that this connectivity provides a path for self-actualization. We can modify settings to customize our web browsing experience, we can pick and choose from millions of options of what online courses we want to take, videos we want to watch or music we want to listen to. The sense of connectedness and omnipotentiality is what provides the adherent of Internet-centrism with a feeling of personal empowerment that comes close to a spiritual experience of traditional religions.

When one reviews the definitions by Schleiermacher or Geertz, or the multi-dimensional analysis by Ninian Smart, it does indeed seem that Morozov is right and that Internet-centrism is taking on many religion-like characteristics. There is probably still a big disconnect between the Silicon valley prophets or pundits who proselytize and the vast majority of internet users who primarily act as “consumers” but do not yet buy into the tenets of Internet-centrism. But it is likely that at least in the short-term, Internet-centrism will continue to grow, especially if Internet-centrist ideas are introduced to children in schools and they grow up believing that these ideas are both essential and sufficient for our intellectual and social wellbeing. Perhaps the pundits of Internet-centrism could discuss the future of this emerging religion with adherents of other faiths at a TEDxInterfaith conference.