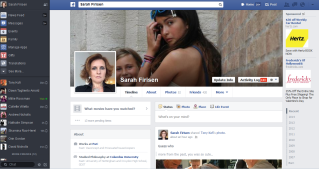 Odds are you’re on Facebook. After all, 1 in 6 people on the planet are on it, why should you be the exception? I think in my immediate circle of friends and family I know one person who isn’t on it at all. I know, I know, we overshare these days; we have no privacy; we allow ourselves to be marketing pawns for Facebook and their minions; we’ve welcomed Big Brother into our lives with open arms. But nevertheless, for most of us, it seems to be the case that if a fabulous meal is eaten and no photos of it are posted on Facebook for our friends and family to salivate over, then the meal never really happened.

So I’m going to go ahead with the assumption that almost everyone reading this, except my one friend, has been exposed to a huge number of their Facebook “friends” posting “Here’s my Facebook movie. Find yours at…” I have to admit that when I first started seeing these pop up in my newsfeed I was skeptical and resisted for a day or so. Then I watched a couple and they were cute and short. Even some of my more intellectually serious friends, including a certain 3QD editor, couldn’t resist. Finally I gave into temptation and had Facebook create mine. I was pleasantly surprised; it did a good job of choosing the highlights that I might have selected. There were a lot of photos of my kids, a few of the dog and one of me showing off a new haircut. And it ended with my New Year’s greeting to friends and family making a vague reference to the hard year I’d had because of my divorce and thanking people for their support. Seemed like a fitting end point.

For hundreds of years people kept diaries and they wrote letters. In these ways, they narrated their own lives and allowed others to follow them, in the case of letters, as their correspondents and in both cases as a record of the stories of their lives for future generations. Most of us don’t write diaries, if anything we write blogs and certainly, if the slow death of the US Postal Service is anything to go by, we don’t write letters. Increasingly, we don’t even send personal emails. These days, I don’t even keep in regular contact with many people via non Facebook email. Some people I text with. A few I used BBM or Whatsapp. Instead, the story of my life is documented on Facebook and for other people on Twitter, Instagram et al.

We don’t have hard copy photo albums anymore, instead we have our Facebook albums and photos are uploaded to them almost in real time from our mobile phones. And while there are disadvantages to this – what on earth will we all do if Facebook ever suffers a catastrophic data loss – there are clearly pros to both the immediacy of the photo sharing and the free agency that allows the viewer to choose whether and when to look at my holiday snaps rather politely faking interest as they feel compelled to flick through a 100 photos of me with bad sunburn.

I know there are people who will bemoan this general turn of events. They’ll talk about what’s lost: the reduced attention span of generations of people who can’t pay attention to more than a 140 character tweet. But actually, as you watch these Facebook movies you come to realize what a very rich trail we’re leaving. Photos, videos, news articles we’ve loved, Daily Show episodes we applaud, causes we’ve been inspired by, relationships coming and going and sometimes coming again. And much more.

I spent this week at a conference about data visualization and storytelling. There were some very interesting presentations from sources as varied at the World Bank to ESPN to Marvel. Something that came through in most of the presentations is that data visualization (and this can be anything from a map to a chart to a movie all allowing varying degrees of interaction) and storytelling should be mutually reinforcing; a storyteller shouldn’t impose patterns on the data, instead allowing the natural patterns that emerge to tell their stories. And in return, the data visualization should bring stories to life, delivering a multimedia experience to the audience. In the case of one of my favorite presenters, Santiago Ortiz, sometimes he literally takes a story – the Iliad for example – and will visually represent it as a data stream.

And this all brought me back to thinking about Facebook and other social media, but particularly Facebook because this does seem to be one of the most narrative driven of the social media tools. Before social media, unless we were letter writers, most of us had very sporadic, piecemeal and one-dimensional interactions with a lot of the people in our lives; we made phone calls, tried to remember birthdays, sent the odd Wish you were here holiday postcard. And when we finally managed to meet up, we had to spend a long time pulling together the threads of what the other person had been doing with their lives. Trying to piece together a coherent narrative of where their relationships, moves, graduations and job changes fit in a linear timeline – “So you dumped John just after you finished grad school because you were planning to move to New York and he wanted to stay in California?” This wasn’t necessarily a bad thing; many of us now have the experience of catching up in-person only to find out that we don’t have that much to talk about because, through Facebook, our friends and family already know what we’ve been up to all year. This is the downside: the overexposure of our stories. But there is also an upside; I’ve found that it can make catching up with people a far richer experience because, to some extent, they feel as if they’ve lived some of my narrative with me in real time. Because they’ve watched my life unfolding, I think they feel far more vested in my stories than they used to when hearing them at a distance of months and years when even my memories of the events were sketchy. Following me on Facebook gives visual context to the stories we then go on to tell in-person.

And like any good data visualization, Facebook is interactive; you can always go to someone’s page and go back over their timeline to see what they’ve been doing over months and years. Unlike those rather tedious Christmas letters that go on for pages and pages about everything the family has done in the preceding twelve months, looking at a timeline can allow you to select for yourself the parts of the narrative that most interest you and to deep dive as particular photo albums, videos and blog postings catch your eye.

Whatever else it is, Facebook does seem to be a great data visualization of our personal narratives. As someone who teaches other people how to be better storytellers, I find this an interesting phenomenon. When I teach a storytelling class, people will often say to me “But I don’t have any stories”. My answer “Of course you have stories, everyone has stories. Everyone has interesting, funny, scary, profound things that happen to them all the time. All you have to do is to select the right story for the right occasion, shape it a little and present it with impact”. Perhaps the first part of that process should be going back through your Facebook timeline to remind yourself of the stories of your life.