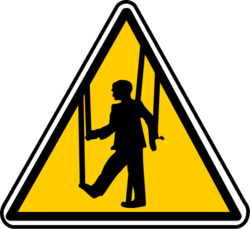 An alarm clock radio wakes me up each morning. For a while, it was set to a radio station that featured mostly pop music and mindless celebrity gossip, mainly because of its clear reception. It also frequently played an advertisement for an insurance company serving military members who have “honorably served” and their families. The ad cast military service in an unquestionably postive light and was played often enough that I could pretty well recite it. One morning, having heard it one time too many, I pushed the button on my alarm over to the buzzer option. “I'll decide for myself what I think of the military,” I naively thought.

At the gym later that day, I found myself on a treadmill before a TV screen playing music videos interspersed with military recruitment advertisements. After my workout, on my way to the locker room, I passed a military recruitment stand with an array of brochures for the taking. I stopped for a few minutes and perused its offerings. As I saw it, the stand was wanting for alternative views, but it was clear that only one viewpoint was to be served to the gym goers, and it wasn't for me to decide.

In 1928, Edward Bernays, a pioneer of propaganda and public relations published his seminal book titled Propaganda.1 In this important, but little known book, he defines propaganda as “a consistent, enduring effort to create or shape events to influence the relations of the public to an enterprise, idea or group.” (p.52) Though the term has acquired a negative connotation, owing to its association with German use in WWI, the practice continues today, euphemized as “public relations”.

This exerpt from the 1928 book could equally apply to our current state of affairs:

“We are governed, our minds molded, our tastes formed, our ideas suggested, largely by men we have never heard of. […] Whatever attitude one chooses toward this condition, it remains a fact that in almost every act of our daily lives, whether in the sphere of politics or business, in our social conduct or our ethical thinking, we are dominated by the relatively small number of persons – a trifling fraction of our hundred and twenty million – who understand the mental processes and social patterns of the masses. It is they who pull the wires which control the public mind, who harness old social forces and contrive new ways to bind and guide the world.” (p.37)

Whether we like it or not, we are being manipulated by an unseen, unelected minority. Society may have grown and evolved over the years, but the changes have served only to intensify the power that these invisible leaders have over us. Control over the media is concentrated today to an extreme degree. As of 2011, just 6 corporations controlled 90% of our media. In 1983, this power was shared among 50 companies.

The extent to which our opinions and behaviors are monitored has also increased significantly. The prescient Bernays recognized the importance of such monitoring, stating that “Modern business must have its finger continuously on the public pulse.”(p.107) Modern business listened.

Keeping a finger on the public pulse, however, means something very different now, with the advent of the internet and an entire industry devoted to the collection of personal information. The sophistication, scope, and application of data-mining today is nothing short of shocking. In a piece for the New York Review of Books, Alice E. Marwick illustrates how the techniques were used in Obama's 2012 election campaign:

“Famously, the campaign recruited some of the most brilliant young experts in analytics and behavioral science, and put them in a room called “the cave” for sixteen hours a day.6 The chief data scientist for the campaign was an analyst who had formerly mined Big Data to improve supermarket promotions. This “dream team” was able to deliver microtargeted demographics to Obama—they could predict exactly how much money they would get back from each fund-raising e-mail. When the team discovered that East Coast women between thirty and forty were not donating as much as might be expected, they offered a chance to have dinner with Sarah Jessica Parker as an incentive.7 Every evening, the campaign ran 66,000 simulations to model the state of the election.”

We like to think that we make up our own minds when it comes to important political decisions, but the decision-making processes that determine our choices and behaviors are by no means confined to our own minds. Rather, they include the efforts of strategists and propagandists who use our personal data to tailor their approaches for maximum influence.

Monitoring and manipulating public opinion on this scale requires considerable financial resources. For this reason, control over public opinion tends to fall into the hands of a wealthy minority. The expense involved has grown astronomically since Bernays penned his influential book, but he recognized its implications even then:

“The invisible government tends to be concentrated in the hands of the few because of the expense of manipulating the social machinery which controls the opinions and habits of the masses. To advertise on a scale which will reach fifty million persons is expensive. To reach and persuade the group leaders who dictate the public's thoughts and actions is likewise expensive.” (p.63)

The cost of manipulating public opinion compliments plutocracy well. Given the necessity of effective data-mining and microtargeted propaganda in modern political campaigns, candidates must be extremely wealthy or backed by those who are, ensuring that our elected leaders will serve the wealthy. We might ask if a plutocratic media is even compatible with true democracy. Economist and media analyst, Edward S Herman, doesn't seem to think so. In a 1997 essay he writes:

“A democratic media is a primary condition of popular rule, hence of a genuine political democracy. Where the media are controlled by a powerful and privileged elite, whether of government leaders and bureaucrats or those of the private sector, democratic political forms and some kind of limited political democracy may exist, but not genuine democracy.” (p.213)

It's hard to argue with Herman's position if we recognize the media as a powerful shaper of public opinion on key issues. If our political opinions and choices are based on the information we receive, those who select this information must exert a powerful influence on our voting behaviors. This is especially true if campaign propagandists have amassed enough of our personal data to know what types of media and content would be most persuasive. If we have little to no control over the media that shapes our thinking, we can't be making free choices, except in a very limited sense.

To think for ourselves is arguably the most fundamental freedom we could have. The rhetoric of “fighting for our freedoms” is often tied to war efforts in other countries, where some might suppose we're installing our superior democratic system of government. However, our most basic freedom and our own democracy are seriously threatened by a plutocratic media, an enemy that is powerful, insidious, and domestic. The freedom to think for ourselves won't be lost through violence or war, but coaxed from our grasp without our conscious awareness.

The media powerfully shapes opinion and serves the interests of those who own it. If we wish to make truly free choices, we need to pull the wires that control our minds.

2. Herman, Edward. “Toward a Democratic Media.” In Triumph of the Market: Essays on Economics, Politics and the Media. Black Rose Books: Montreal, 1997.