There are, according to Randall Henderson, founding editor of Desert Magazine (1937-1985), two deserts in the American imagination. One is full of “venomous reptiles and unbearable heat…it is the desert visualized by those children of luxury to whom any environment is unbearable which does not provide all of the comforts and services of a pampering civilization.” This is “fostered by fiction writers who dramatize the tragedies of the Desert for [their own] profit.” By contrast, the real desert, as Henderson saw it, “offers rare gifts: health giving sunshine — a sky studded by diamonds — a breeze that bears no poison” to those who come “in friendliness and understanding.”

There is, of course, only one desert, equally full of comfort and danger, plenty and lack. Its gifts – that diamond sky is real – are for everyone, but its history shows all America's small scars.

Back in 1936, Henderson saw an opportunity to serve the culturally under-served citizens of the American Southwest. The people of the desert deserved a magazine of their own, he wrote in his first editor’s note – a note that reflects the cultural nervousness and occasional defensiveness that infects the Western mind:

Henderson hoped his magazine would “preserve a culture of arid…but virile…America.” An ad from the December 1964 issue describes the ways to enjoy the desert: as collector, traveller, adventurer, history buff, or nature lover. 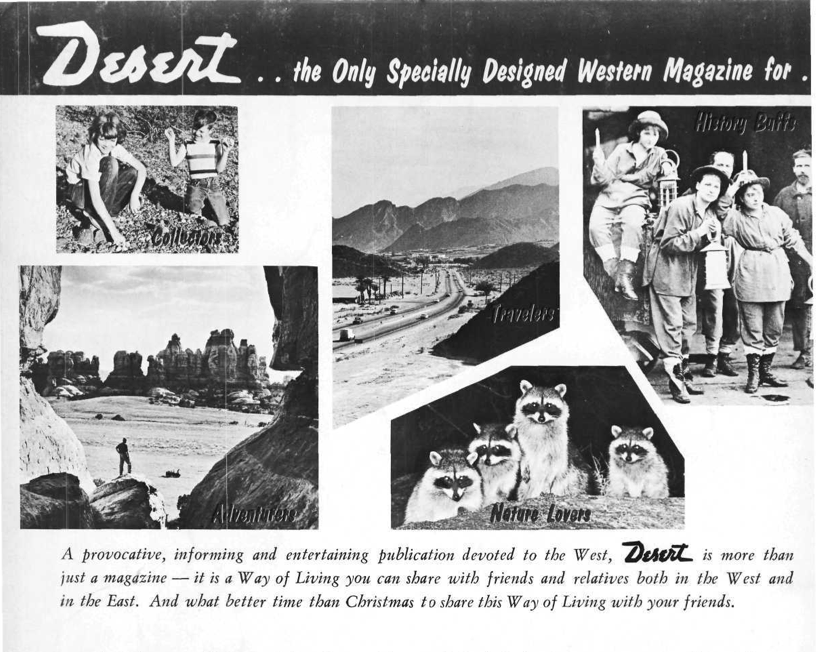 Sadly for Henderson’s arid dreams, the “comforts and services of a pampering civilization” have, to a large extent, invaded the corner of desert I know – otherwise I wouldn’t be there. Borrego Springs, a tiny town in Borrego valley, had dreams of being the next Palm Springs – a glitzy resort town – but has, in middle age, settled into being the anti-Palm Springs: relaxed, mellow, still full of golfers. 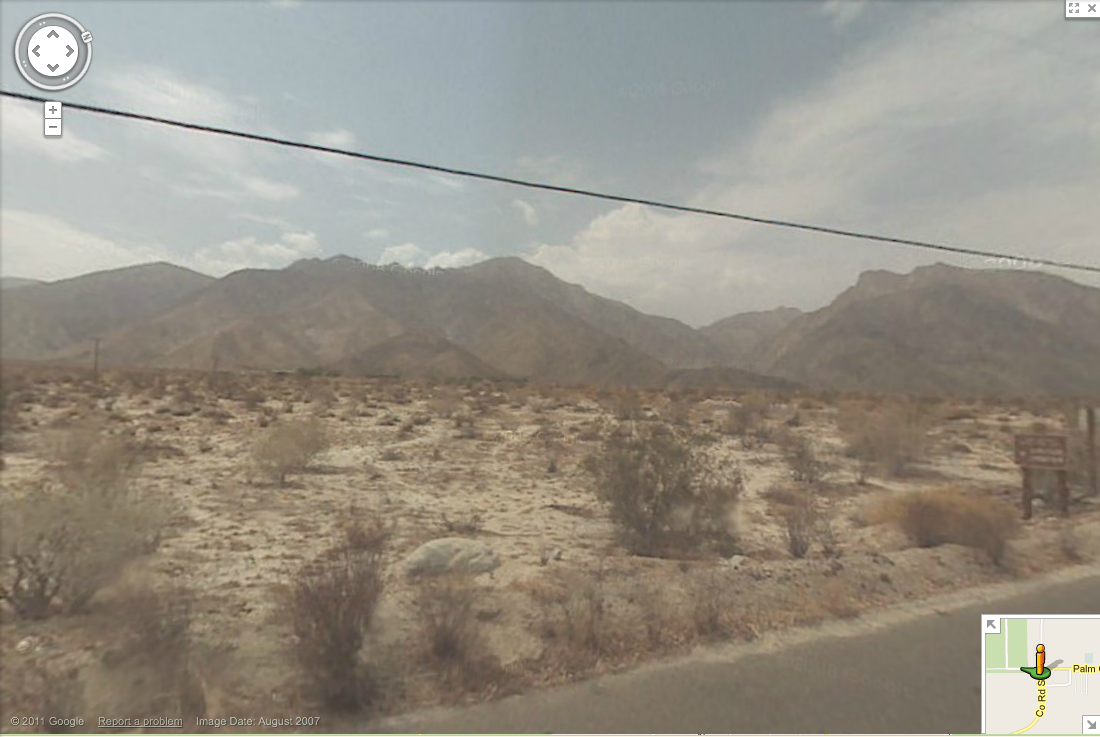 People are always crossing this desert valley, though, “impatient”, as Henderson muttered,“to be out of this damnable country.” In the late 18th century Juan Bautista de Anza, a Spanish captain, was sent to map an overland route from central Mexico north to Monterrey and on to the San Francisco Bay. 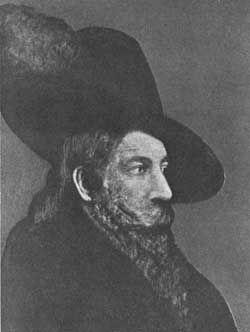 He did this, with the help of Sebastian Tarabal, a Spanish speaking Native American whom John Robinson and Bruce D Risher of the Big Santa Anita Historical Society (1992) describe as “one of those shadowy characters in history who seem to come from nowhere, shine briefly, then fade into obscurity.” So many of those, right? Of course, all the valleys, community colleges, and golf courses along the route are named for De Anza.

On a second expedition, De Anza took colonists with him. It was, it seems, a bit rougher going this time, with hunger and thirst and pregnant ladies. In 1775 said pregnant woman looked up at a mountain here and saw an apparition she took to be an angel pointing her thirsty party of toward water. Sra Linares’ vision supposedly led the group to a spring, and she herself gave birth that evening, so auspiciously, on Christmas eve, and the baby, the Desert Magazine carefully noted in 1964, was “one of the first white children to be born in California.” Thereafter, “the emigrants resumed their journey to the Pacific.”

Desert Magazine reflects the changing identity of the Borrego Valley as it describes the mountain’s mark, that Sra Linares saw as a pointing angel: “Others today believe it more closely resembles a golfer about to address a ball, for the figure points toward one of the most beautiful golf courses in San Diego county, the De Anza Desert Country Club, where winter sun that once sparkled on De Anza's silver-lipped helmet now benignly toasts a golden blonde.” Today the golden blonde is silver, and golf club can’t afford to water all the grass all of the time, keeping squiggled swathes on either side of the actual green in intermittent, fallow, yellow. It still costs $400 a week for a trial membership.

Meanwhile, emigration continues. The ACLU estimates more than 5000 have died trying to cross the parts of the US-Mexico border made up of the Sonoran desert- particularly since Operation Gatekeeper, which since 1994 focused border enforcement in highly populated areas, forces people away from safer areas and into the desert.*

The desert space can be a danger or an assurance. In August 1940, Henderson’s editor’s note recounted a New Yorker seeking safety from Hitler in the desert:

In the east of the Borrego valley, between 1942 and 1959, aerial bombs were dropped extensively, and between 1941 and 1943, the Borrego Maneuver Area was used by US ground forces to prepare to battle Hitler in Libya. Oddly, the Army Corp of Engineers web site chronicling the cleanup effort notes:

Groups of Marine trainees rotated through the camp for periods of about a week during which they gained proficiency in driving military trucks at night. Although their practice course is not known, it is believed that they…drove freely across the surrounding desert.

There is, of course, only one desert – as far West as we ever went, as big as we ever dreamed, and full of our unexploded bombs. It is not too safe there, but it is a fine place for a great round of golf – as long as we can afford to keep watering the grass.

*Regarding death in the desert crossing: A few fine organizations try to prevent this, both through political lobbying for humane borders and by actually making humane borders themselves, by leaving water way stations the desert.