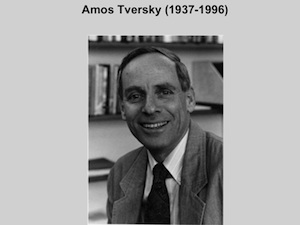 The marvels and the flaws that I'll be talking about are the marvels and the flaws of intuitive thinking. It's a topic I've been thinking about for a long time, a little over 40 years. I wanted to show you a picture of my collaborator in this early work. What I'll be trying to do today is to sort of bring this up-to-date. I'll tell you a bit about the beginnings, and I'll tell you a bit about how I think about it today. 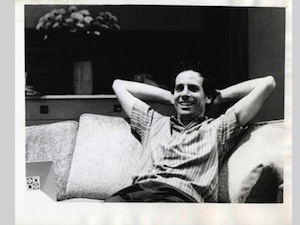 This is Amos Tversky, with whom I did the early work on judgment and decision-making. I show this picture in part because I like it, in part because I like very much the next one. That's what Amos Tversky looked like when the work was being done. I have always thought that this pairing of the very distinguished person, and the person who is doing the work tells you something about when good science is being done, and about who is doing good science. It's people like that who are having a lot of fun, who are doing good science.

We ended up studying something that we call “heuristics and biases”. Those were shortcuts, and each shortcut was identified by the biases with which it came. The biases had two functions in that story. They were interesting in themselves, but they were also the primary evidence for the existence of the heuristics. If you want to characterize how something is done, then one of the most powerful ways of characterizing the way the mind does anything is by looking at the errors that the mind produces while it's doing it because the errors tell you what it is doing. Correct performance tells you much less about the procedure than the errors do.