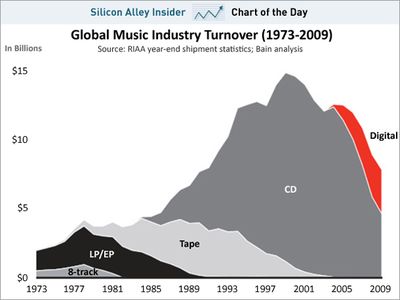 This chart's been making the rounds lately everywhere, from top political bloggers to financial gadflies to music industry maven Bob Lefsetz. It's gone viral, crossed over, become a smash … in other words, it's done everything that records don't do anymore. (Except maybe Cee Lo's, which is retro in every good possible way.)

This chart's got a 'hook' – in this case, a simple and clean presentation that illustrates the rise and fall of the music business. And it has so many overtones: economic, musical, personal …

The story's simple: Vinyl got replaced by tape, then tape started falling off just as revenues from CDs picked up the slack and started skyrocketing. The business kept falling upward, making more and more money as it went. Until it didn't.

When Things Go Wrong … It Hurts Me Too

In the late seventies rock and roll seemed to be booming. I had some songs and a five-piece band, and two managers were fighting over me. One was still struggling, on the way up. He'd take me out to breakfast once in a while according to then-standard manager/artist protocol: rented limo, Eggs Benedict and champagne, an offer of coke in the back seat on the way back. He'd managed to scrape up an offer from a second-rate record company that had a lot of hits once, but was struggling to be relevant again. The other manager couldn't care less about impressing me. But he had a superstar New Wave client and got me into a couple of major labels, both of which booked studio time for demos.

The first manager was a nice guy – not always a plus in a manager – and he had the hustle it might've taken to break an unknown act. But I dropped him and went with the guy who had the superstar in his stable. Everything was going great until I met the superstar at a party and mentioned his name. “I'm sorry I have to walk the same planet as that asshole,” she said. Uh-oh.

The shape of that music industry curve looked awfully familiar. Where had I seen it before? Here's a different chart for the same time period: 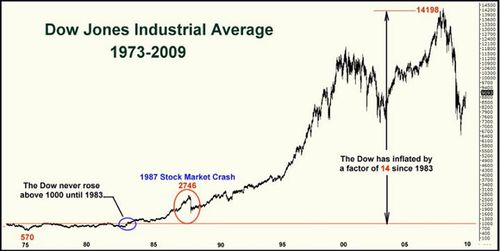 There's a striking resemblance here. But could it really mean something? Did the Dow actually rise and fall in close harmony with the music industry? Here's an overlay of the two lines: “Wise man see outlines,” William Blake wrote in his diary, “and therefore they are wise.” Are we seeing an overlooked correlation or just a fluke? How does the economy affect rock and roll – or vice versa, for that matter?

Here's one way: In 1979 I was being scouted by two record labels. The bidding war, I was assured, was already heating up. Then the ayatollahs took over in Iran. Oil prices soared and people began talking about a “music industry recession.” LPs were a petroleum product.

Suddenly the record labels weren't interested anymore. Even the offer from the has-been record label was withdrawn. Around downtown Manhattan I became aware of a lot of guys turning thirty, like I would be in a few years, still scuffling to make it in the rock and roll game. I was back in California before another winter ended.

Before another year had passed, oil prices were falling again and the music biz was on its upward trajectory. But it felt too late for me. When John Lennon got shot, I was really crying for myself.

The other day I jokingly decided these two curves – the Dow and the music industry – meant that “Wall Street killed rock and roll.” I could almost see the music business being stalked relentlessly by the stock market, until that beast finally drained its victim dry. My colleague Rob used to be an extremely successful hedge fund manager, and he had a completely different (also joking) reaction when I mentioned these charts to him. “Okay,” he said. “So we save the music industry and we've fixed the economy.”

The economic chart as Rorschach test: I'd spent a lot of time in risk management, but Rob had generated a lot of wealth. Where I saw danger, he saw opportunity – even in a joke. Because it is a joke. Right?

What about housing prices over the same period? 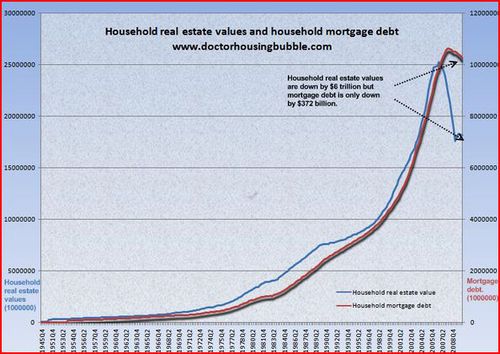 (From DoctorBubble.com — whose proud parent may, for all I know, be the subject of this portrait.)

When real estate values plummeted, most of the debt for the “bubble” part remained with homeowners. If we adjust for defaulting borrowers, this graph tells us that banks are being artificially propped up — in both their books and their revenues — by government policy that's left homeowners holding the bag for overpriced housing. The principal on those loans can't be adjusted, say our leaders in Washington, because it would be “rewarding the undeserving.”

Look at all three lines together, though – with thick black for music, jagged black for the Dow, and blue for housing value (source: me, with my lame photoshopping skills):

Does it mean anything? Is there a correlation, or maybe something more subtle? A signature of the time and its mood, maybe?

But who's exuberant now? Not rock and rollers, and not homeowners. Things haven't changed much since the days when record producers cruised the ghetto in Cadillacs looking for songs to steal. Except now they're stealing from the producers, too, and the ghetto's everywhere.

A Story That's Never Been Told

The music industry chart measures revenues, not sales.The amount of revenue rose faster than the number of units sold. Record companies got greedy and used every new technology, from tape to CDs, to mark up their products even more. They had quarterly earnings to report to a thirsty stock market. As CEO Chuck Prince of Citigroup said in a different context, “As long as the music is playing you've got to dance.”

A public that felt ripped off by the industry was more than happy to steal their product en masse. Said Bob Dylan: “I remember when that Napster guy came up across, it was like, 'Everybody's gettin' music for free.' I was like, 'Well, why not? It ain't worth nothing anyway.'”

The rest is history … and so's the music industry. David Byrne did a good job laying out the state of the biz a couple of years ago, and while the figures have changed, the reality hasn't: Musicians can make more money from iTunes downloads than they can from CDs. They have to make money by hitting the road and performing – just like medieval jongleurs or minstrel show acts before sheet music and piano rolls (hence “mechanicals” for royalties) and all the other technology. Now technology's brought the Apocalypse, and they're road warriors again.

Why do these three lines look so similar? Probably no reason at all. “Mad men see outlines,” Blake wrote later in the same diary, “and therefore they are mad.”

Stocks, housing, rock and roll … the possibility of big money distorts. I had a big argument with that big rock manager when I told him I'd be satisfied with, say, $50,000 per year – a great living at the time – to do what I love. That wasn't a winner's attitude he said, and it didn't last. After less than a year in the pop music grind I'd changed my sound to match the four-on-the-floor New Wave Elvis Costello-ish beat that was where the money was. I had lost the feel. It was time to go.

Maybe these curves reflect some mass versions of “sentic forms,”

the biophysical arcs of emotion that musician/scientist Manfred Clynes thinks are the physiological basis for all composition and performance. (Clynes invented the word “cyborg”; I went to school with his son Darius, and a couple of years later Darius and I played the coffee shops of North Beach in San Francisco together.)

Maybe societies have mood swings too, and those parallel economic charts reflect them. Probably not. A lot of industries were rising through this four-decade period. A lot of these lines will look alike. It's probably a Rorscharch test and nothing more. The rest is probably projection, not a reflection of the money-fueled mania that's driven us since the seventies.

I was at a risk management conference a couple of years ago, right before the big crash of '08, and saw three guys and a woman from one of the big brokerage houses playing Rock Band on a 70-inch screen. They were role-playing as “members” of an early-seventies proto-punk group I once opened for in Max's Kansas City once. I shouldn't have done it, but I stopped and said (with a smile), “It's official: Rock and roll is dead.”

“No way, dude,” one of the young brokers answered. “We're keeping it alive!” Good luck with that, I said, and kept walking.

Those brokers in the video game had no idea how dirty the floors were at those old rock and roll clubs. Their virtual reality didn't include the graffiti in the dressing rooms, or the junkies who gulped half your beer when you weren't looking and then licked the spittle off their lips. All they saw was some older guy walking by the booth who didn't have that real rockin' spirit. Who's to say whose reality is more real? After all, that was a long time ago, and James Brown said it best:

Money won't change you … but time will take you on.